Learn how to avoid combustion and barn fire caused by your stored hay. Q: A friend recently told me that stored hay can self-combust. I’d never heard of this before. I keep my hay in my horses’ barn, above the stalls, and now I’m terrified it’s going to catch fire! Should I be concerned, and how can I store hay and keep my horses safe?

A: It is, indeed, true that under certain conditions, hay can self-combust. In fact, it’s a major cause of barn fires along with electrical malfunction, poor housekeeping, and careless work habits.

The No. 1 cause of hay self-combustion is that it was put-up (stored) with too high of a moisture content. Whether you should be concerned will depend on the conditions under which your hay was baled.

Hay shouldn’t be baled and placed into storage with a moisture content more than 20%. Most fires where hay self-combusts occur within two to six weeks of storage where bale moisture content exceeds this level.

When grass is cut for hay, the cells within the grass continue to respire—a process that produces oxygen and some heat. If hay is given adequate time to dry in the field and baled with low enough moisture content, this process will stop. However, it will continue after baling and in storage in bales with a higher moisture content.

Baling hay with a moisture content more than 20% creates an ideal environment for mesophilic bacteria growth. These bacteria thrive in warm environments and can release more heat within the bale. This can cause the internal temperature of the bale to rise to 130ºF to 140oF, at which point the mesophilic bacteria die off. This itself isn’t enough to cause combustion, although it will negatively impact the nutritional value of some more heat-sensitive nutrients. The greater concern though is that this raised temperature creates a breeding ground for the heat-loving thermophilic bacteria. These bacteria can cause a further temperature increase to over 170oF, which can lead to self-combustion.

While storing hay in smaller stacks with good air flow will help reduce combustion risk, the best option is to ensure that hay is baled with less than 20% moisture. To help achieve this, growers should put up hay when there’s a slight wind and a humidity of 50% or less. Baling later in the day when there’s less dew will also help.

Many hay growers use equipment designed to increase air movement through the hay while it’s drying to help decrease moisture content. Hay preservatives such as proprionic acid can also be used to help reduce bacterial growth on high-moisture hay. 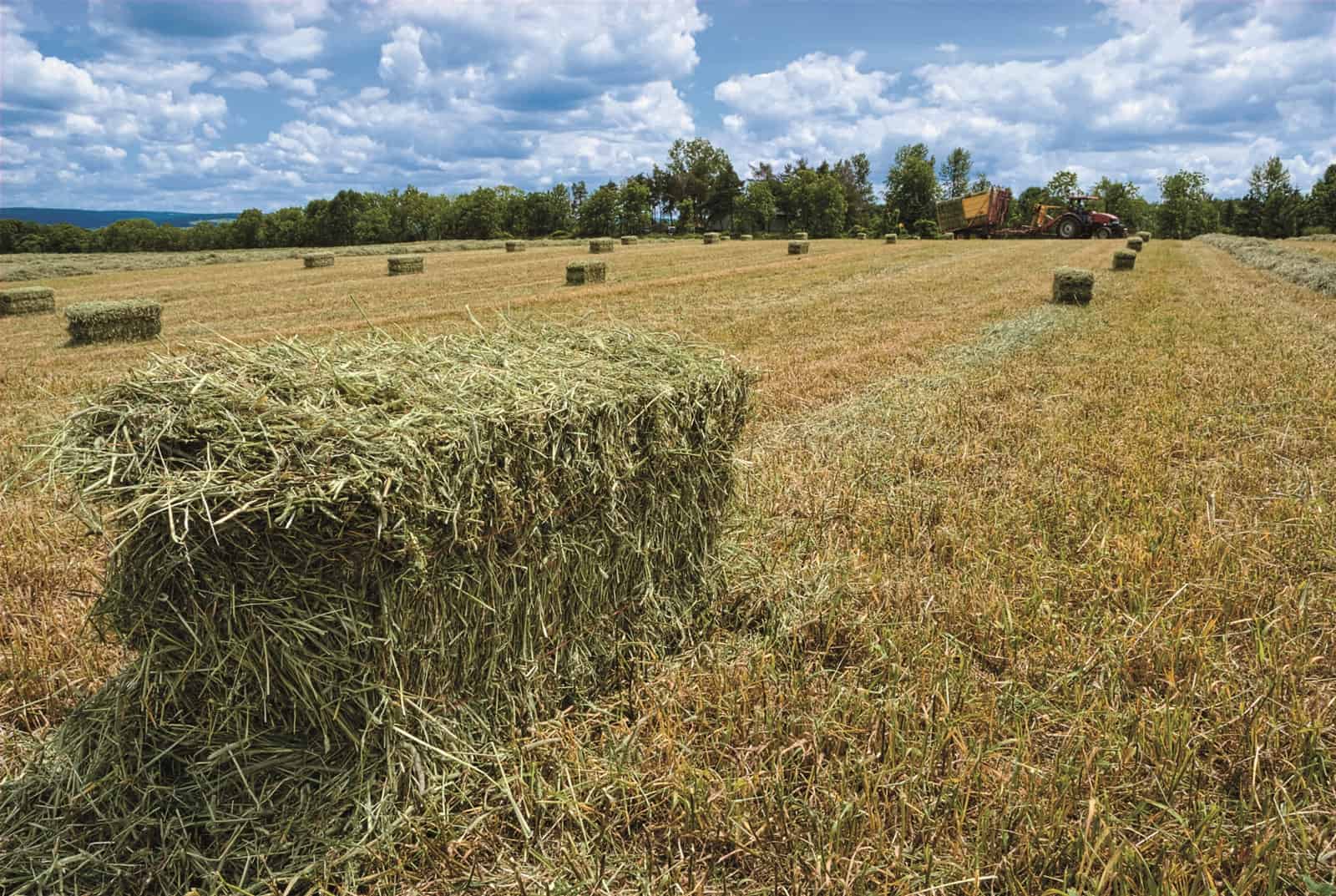 Another important consideration: Hay that gets wet while stored is at-risk of restarting the fermentation process. Be certain that roofs or covers over hay are water-tight and not allowing hay to get wet.

When buying hay in bulk off the field, if you’re unsure of the harvest conditions, ask the grower what the moisture content was at baling. Most larger growers have ways of measuring moisture content using a handheld meter to determine when to bale the hay.

If you’re concerned that your hay has been put up too moist, monitor internal bale temperatures and moisture levels daily for several weeks. This is something that needs to be done with great care, especially on a large stack, because hay deep within could be smoldering and create a burned-out cavity that could collapse when a person walks across the top. Never walk across the top of recently stored hay without wearing a lifeline and being observed by another person.

I strongly recommend seeking the advice of your fire department or other expert if you determine that your hay is at risk of combustion. While keeping hay in a loft over stalls is very convenient, especially for feeding as many such lofts allow you to drop hay directly in to feeders below, it does place your barn at greater fire risk. Even if the hay isn’t the cause of the fire, hay provides amazing fuel that is extremely hard to put out once ablaze. Combined with the added dust that results from keeping hay over stalls that negatively impacts air quality, my preference is to not keep hay over stalls. Transitioning a Horse to Barefoot for the Winter

FAQs About Horses and Alfalfa

If you are interested in adopting this horse, please submit an ‘Adoption Inquiry’ via our website: Allaboutequine dot org. No…
07/01/2021
Total views: 1058