Reparixin: The Future of Laminitis Treatment? The researchers observed that treated horses did not experience the same progression of tissue inflammation and damage as untreated horses did after laminitis induction.
Photo Credit: Rafael Faleiros
ADVERTISEMENT

Non-steroidal anti-inflammatory drugs such phenylbutazone, flunixin meglumine, and ketoprofen—these are all common drugs when it comes to managing inflammation in horses. Each has its advantages and disadvantages though, and when trying to block the inflammatory response in horses with laminitis there is no gold standard treatment. But what if a new drug, from an entirely untapped class, got thrown into the mix?

This is the question Brazilian researchers aimed to answer when they studied the effects of reparixin, a drug used in organ transplant and stroke patients, on horses with experimentally induced laminitis. Rafael Faleiros, DVM, PhD, a professor at the Universidade Federal de Minas Gerais, in Belo Horizonte, Brazil, presented their findings at the 2013 International Equine Conference on Laminitis and Diseases of the Foot, held Nov. 1-3 in West Palm Beach, Fla.

Laminitis is a devastating hoof disease in which the interlocking leaflike tissues called laminae anchoring the coffin bone within the hoof become inflamed and, thus, fail to support the bone.

Reparixin is an experimental drug that prevents white blood cells from leaving the bloodstream and invading and damaging tissue during acute inflammation. It might lend a hand in laminitis cases because "leukocyte (white blood cell) infiltration in laminar tissue is a consistent event in equine acute laminitis that precedes and may contribute to the detachment of hoof wall from the coffin bone," Faleiros explained. 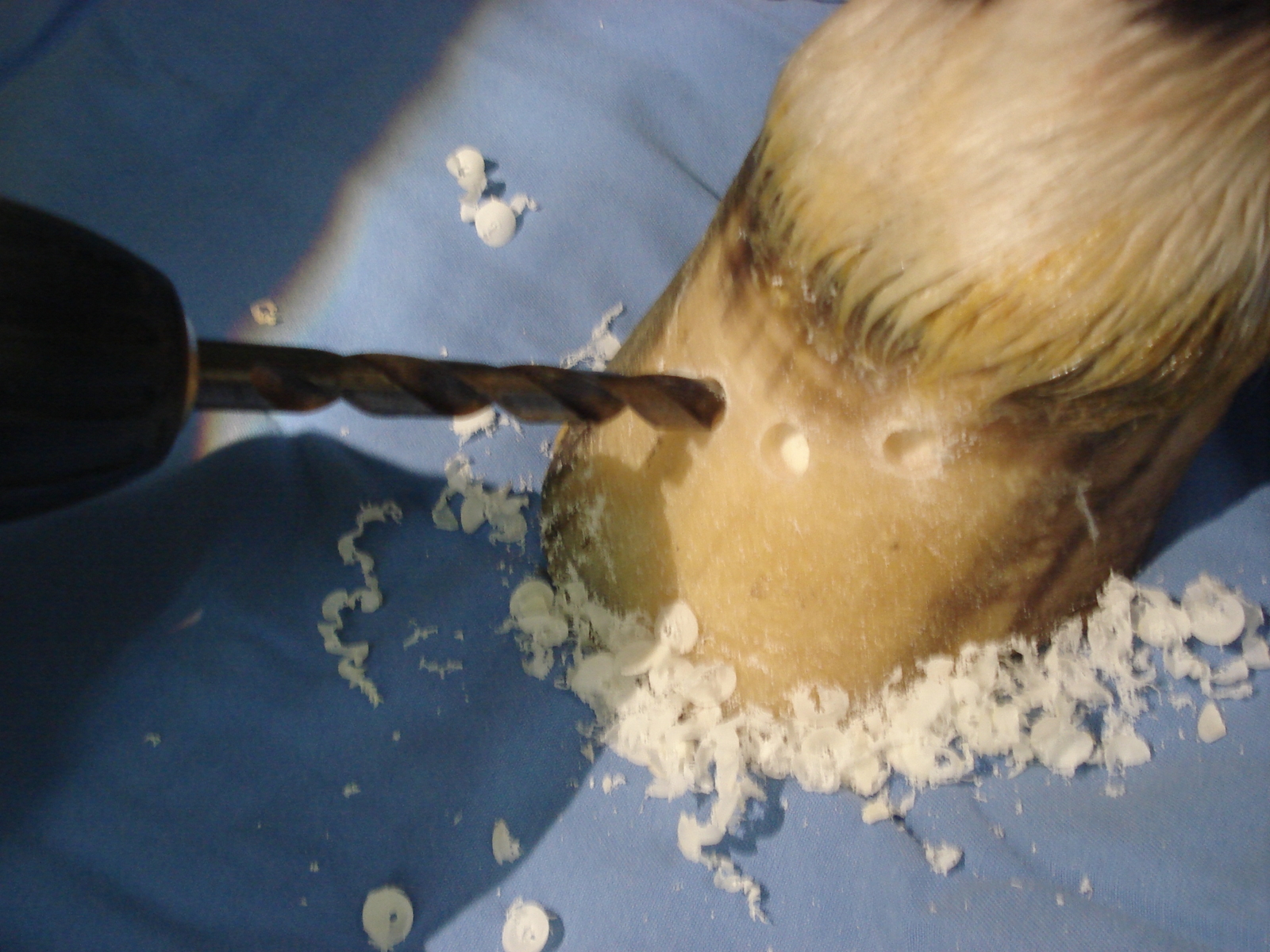 The researchers collected biopsy samples to look for signs of inflammation and damage in the hoof’s connective tissue.

In their study, Faleiros and colleagues aimed to evaluate the effects of intravenously (IV) infused reparixin in horses subjected to experimentally induced laminitis. Using an oligofructose (carbohydrate) model, they induced laminitis in 12 light-breed horses. The team then administered reparixin to six of the horses 6, 12, 18, and 24 hours after laminitis induction and left the other six horses untreated as controls. The team then took biopsy samples of the horses’ laminar tissue 12, 36, and 72 hours after laminitis induction, looking for signs of inflammation and damage in the hoof’s connective tissue.

Faleiros said reparixin treatment neither affected any of the horses’ clinical signs nor caused any apparent adverse effects. The researchers did, however, observe that treated horses did not experience the same progression of tissue inflammation and damage as untreated horses did after laminitis induction.

"Although the reparixin therapy protocol did not interfere with the development of clinical signs, it prevented laminar inflammation and epidermal deterioration in the treated group," Faleiros said. "Reparixin shows potential therapeutic effects for the prevention of hoof capsule separation of the coffin bone in acute laminitis."

He noted, however, that the drug is not commercially available and further studies are warranted.

The study, "Reparixin, an antagonist of CXCR1/2, in experimental laminitis," was published in the October 2013 issue of the Journal of Equine Veterinary Science. We have an "AMAZING Lineup" of exciting and available Thoroughbreds for you to meet. They have been rehabilitated, retrained and…
08/06/2019
Howell
Michigan
Total views: 4847
Other (Please specify in details)
Thoroughbred
Gelding