Could a Supplement Ease the Effects of Tying Up?

Japanese researchers recently tested a supplement designed to alleviate both tying-up episodes and the muscle damage, with positive results. Tying-up, or exertional rhabdomyolysis, is a frustrating problem that sport and racehorse trainers try diligently to prevent. Fortunately, there's some good news: Japanese researchers recently tested a supplement designed to alleviate both tying-up episodes and the muscle damage, with positive results.

Tying-up is a term used to describe a variety of muscle disorders in equine athletes. Affected horses develop varying degrees of muscle cramping or muscle soreness after exercise, with the more severe cases accompanied by elevated respiratory and heart rates, dark urine, and reluctance to move or stand.

The supplement researchers tested in the current study included astaxanthin and L-carnitine, Sato explained. The former, he said, has strong antioxidant effects, while the latter has been shown to enhance fatty acid oxidation (a process the body uses for normal energy production and immune function).

Sato and colleagues studied the supplement's effects on blood serum markers of exercise-induced muscle damage and tying-up episodes in Thoroughbred racehorses in training. 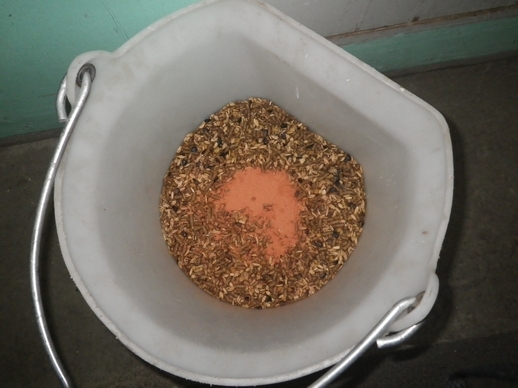 The supplement Sato used in his study contains 75 mg of astaxanthin and 3,000 mg of L-carnitine

The team fed the supplement—which contained 75 mg of astaxanthin and 3,000 mg of L-carnitine—to 31 horses in training daily for eight weeks; 32 control horses did not receive supplementation. The researchers collected blood samples from each horse before supplementation began and three days and eight weeks after supplementation started. They also evaluated any instances of tying up.

Based on those findings, Sato concluded, "Continuous dietary administration of astaxanthin and L-carnitine attenuates exercise-induced muscle damage and can prevent the onset of tying-up syndrome in Thoroughbred horses."

Sato said the supplement used in his study is commercially available in Japan and is widely used by the Thoroughbred industry there. "I hear that the reputation of the supplement is very good," he said. He also noted that it will likely be available for purchase in the United States in the future.

Going forward, he said, he and his team hope to study astaxanthin's effects on conditioning, immunity, and fertility in mares. This stunning 5yo mare is by the ultimate dual purpose sire, Contenda. Contenda competed at the top level in eventing…
10/05/2020
Total views: 3495