Collapsed heels are a common problem in horses, particularly Thoroughbred racehorses, and can cause decreased performance and lameness. Because little is known about the mechanism behind this condition, a group of researchers from The Royal Veterinary College, in London, U.K., recently examined the relationship between collapsed heels and hoof deformation. Farrier Peter Day, Dipl. WCF, presented their findings at the 2013 International Equine Conference on Laminitis and Diseases of the Foot, held Nov. 1-3 in West Palm Beach, Fla.

Horses’ feet experience forces as high as 2.5 times their body weight when galloping—equivalent to a car crashing down on their foot every time it hits the ground, the researchers said. Fortunately, horses have developed several anatomical features that allow them to cope with these high loads, one of them being how the hoof deforms when loaded. "Hoof deformation (basically, a change in hoof capsule shape) is a shock-absorbing mechanism," Day explained.

In horses with collapsed (underrun) heels, the heels are lower and have a different shape than normal heels, which can impair their ability to deform when under load.

"We hypothesized that hoof deformation will be decreased in feet with collapsed heels compared to normal feet," he said. If this proves true, horses with underrun heels will not be able to cope with high loads as well as horses with normal feet, and other musculoskeletal structures (e.g., the navicular bone) will come under more load and be at increased risk of injury. 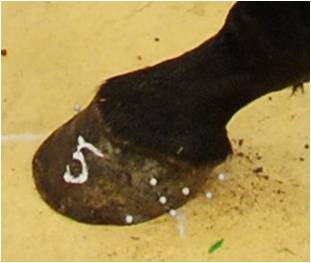 The team placed seven markers on each heel, a force plate beneath the foot, and used a camera motion analysis system to determine hoof deformation during loading.

In their study, Day and colleagues used 12 equine cadaver legs—six with collapsed heels and six without, as diagnosed by two farriers and one veterinarian and quantified via radiographs (X rays). The team then placed seven markers on each heel, a force plate beneath the foot, and used a camera motion analysis system to determine hoof deformation during loading. They loaded the limbs as if the horse were moving at a fast trot or canter; the team performed four trials on each limb. The team then compared heel deformation between the collapsed and noncollapsed groups medially (toward the inside of the foot) and laterally (toward the outside).

"Feet with collapsed heels show less hoof deformation, thus decreasing the shock-absorbing effect and possibly increasing the load on other musculoskeletal structures like the navicular bone, ligaments, and tendons, and may also influence the blood supply in this region," Day concluded. "Collapsed heels may predispose horses to the development of further foot pathology, such as navicular disease."

Current treatment options for collapsed heels (e.g., gel packs, bar shoes) are often not as successful as farriers, veterinarians, and horse owners would like, and researchers at the Royal Veterinary College are currently studying the best method to treat or prevent this problem.