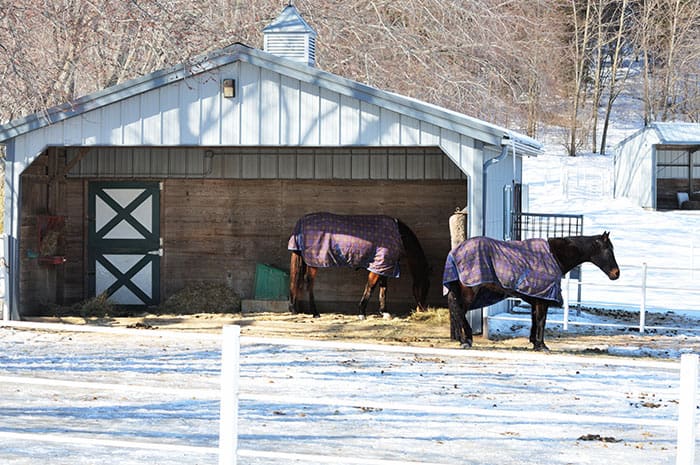 When it comes to the “hot” topic of blanketing, a metabolic balance is at play, according to results of a new study. Researchers led by Michelle DeBoer, PhD, an assistant professor at the University of Wisconsin in River Falls, found blanketed horses ate 8% less free-choice hay than their unblanketed peers while maintaining similar body conditions.

The Study: Free-Choice Hay and Blankets vs. No Blankets

DeBoer and her fellow researchers blanketed eight adult horses housed in a dry outdoor paddock in Wisconsin from December to January. Nearby in a second dry outdoor paddock, they left eight other adult horses, similar in breed, body weight, and body condition to the first eight, without blankets for the same time period. Each group of horses had access to identical bales of grass-legume hay, and they could eat as much as they wanted.

The researchers found that, on average, the horses’ weight and body condition remained similar between groups throughout the study. But when the scientists compared the weight of the hay bales in each group before and after the study, they noted the unblanketed animals had eaten more hay. Calculating a daily average per animal, they determined that the unblanketed horses consumed 2.51% of their body weight whereas the blanketed horses consumed 2.31% of their body weight—a drop of approximately 8% of total hay fed.

“For a 1,000-pound horse, this would equate to blanketed horses consuming approximately 2 pounds less hay on a daily basis,” DeBoer said. The horse’s consumption never dropped below the recommended minimum forage intake level of 1.5-2% of body weight for a healthy adult, she said.

Less Hay, but Not a Weight Loss Strategy

“Our study demonstrated that horses tended to voluntarily reduce their intake when blanketed,” said DeBoer. “While this adds up when feeding a herd of horses over an entire winter, it does not mean horses can be fed drastically less hay if they are blanketed.”

While blanketing horses could result in a more slowly depleting hay supply, it doesn’t mean owners should deprive their horses of hay because they’re blanketed, DeBoer added. Horses need hay to meet their nutritional needs and support their gastrointestinal (GI) health.

“A horse’s GI tract is designed to consume forage continuously throughout the day, and we do not want to disrupt that or we may put the horse at risk for GI problems such as ulcers,” DeBoer said. “As a result, if a horse owner is reducing hay fed based on the results of this study, it is important to still feed the horse adequate hay, which will vary based on the condition and type of horse (maintenance, exercising, pregnant, lactating).”

The reduced hay consumption shouldn’t be seen as a weight-loss method, she added. Just because the horse eats less hay doesn’t mean he’s losing weight. In fact, the opposite is true, she explained. The blankets can add so much body warmth that the horse ends up expending less energy to heat himself, and if he doesn’t reduce his consumption enough to meet that balance, he could gain weight.

“It is crucial that horse owners continuously monitor the horse for changes in body condition and weight,” she said. “Based on the condition, or changes in condition, of the horse, owners can make adjustments to the diet as needed with help from a veterinarian or nutritionist.” she said.

Michelle DeBoer, PhD, an assistant professor at the University of Wisconsin in River Falls, offers the following tips for blanketing horses:

Regardless of whether the horse tends to lose or gain weight while blanketed, owners must check their horses’ body condition regularly to ensure hay intake is balanced with nutritional needs, said DeBoer. Because blankets can hide body condition, people should take blankets off at least several times a week, if not daily, for a reliable evaluation.

To Blanket or Not?

Owners should also consider that the labor and expense of blanketing versus not blanketing is a tradeoff, DeBoer said. “Blanketing can be a very time-consuming and labor-intensive process that should not be taken lightly.”

This study provides one more element to consider among many affecting the decision to blanket, DeBoer said. In particular it can help owners make choices when hay is scarce. “In recent years, we have had hay shortages that have driven up hay prices and led to horse owners having difficulty in finding horse-quality hay to provide to their equines,” she said. “While this research demonstrated minimal cost-savings in comparison to the cost of purchasing and maintaining a blanket, blanketing may provide an option for horse owners during times when hay availability or labor is limited.

“As a result, I think this is valuable information to help horse owners make more informed management decisions during these times and to understand how blanketing may influence horses and their feeding behaviors,” she said.

If you are interested in adopting this horse, please submit an Adoption Inquiry via AAE's website; No texts please: www.allaboutequine[dot]org/how-to-adopt.html.…
01/13/2023
Total views: 143