In a standardized-lesion-induced model, veterinarians found high-powered laser significantly reduced enlargement of lesions on ultrasound and increased signs of healing on Doppler and MRI. 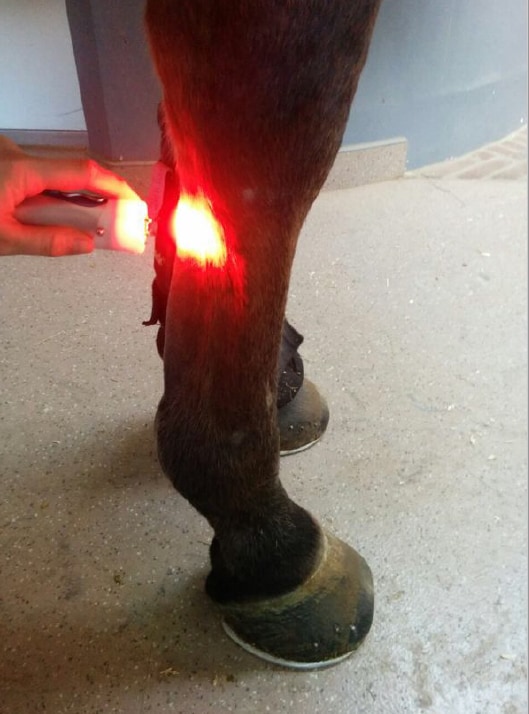 As veterinarians find empirical success treating horses’ soft tissue injuries with complementary approaches, the common refrain heard is, “Great—now show us the science,” requesting peer-reviewed research to validate the modality’s use. A research group based in Germany and Belgium did just that when they recently tested high-powered laser therapy in a standardized control study and found it significantly improved lesion healing in the suspensory ligament branch, a common cause of lameness in equine athletes.

“A lot of therapy modalities are being used before they’re actually tested in a standardized control study,” said Mathilde Pluim, DVM, MSc, an equine veterinarian at Tierklinik Lüsche, an equine hospital in Bakum, Germany, who performed the trial along with Prof. Catherine Delesalle’s Research Group of Comparative Physiology at Ghent University, in Belgium. She presented the results on the team’s behalf at the 2020 American Association of Equine Practitioners Convention, which is currently underway online.

The veterinarians assessed a Class 4 laser, which emits four different wavelengths simultaneously. “It penetrates up to 7.2 centimeters, and there are preset treatment protocols available in the device,” she explained. “So, depending on the depth of penetration and effect you want to achieve, you can pick a preset protocol suiting to the type of lesion and the lesion size.”

In a previous study, the team had retrospectively—in this case looking back at records and surveying horse owners—evaluated the short- and long-term results of treating 150 sport horses diagnosed with tendinopathy or desmopathy with this laser. Researchers saw significant improvement directly after laser therapy and four weeks later. The horses started controlled exercise after five to seven weeks and were back at their previous performance levels after 4.7-6.1 months, “much sooner than what has been described in other studies on tendon and ligament injuries in horses,” she said. Reinjury rate after two years was just 18%.

In that study the research group found no significant differences between injury locations, the acute injuries had a better prognosis than the chronic ones, adding other treatment modalities (such as platelet-rich plasma) offered no benefits, and the outcomes were worse in horses that had reinjured themselves.

Because the horses and lesions in that study were so diverse, Pluim and her colleagues sought to use a standardized lesion induction model to study the short- and long-term effects of laser treatment in 12 Warmbloods (six in each group). The five geldings and seven mares, ages 4 to 12, showed no signs of lameness or ultrasonographic changes in their flexor tendons. The researchers surgically created identical lesions in the lateral (outer) suspensory branch of all four of the horses’ limbs with ultrasound guidance. Diagonal pairs of legs—so, the left front and the right hind, etc.—served as treatment and control groups and were randomized among the horses.

“The day after surgery … we didn’t see any heat, any swelling, pain, or lameness,” she said. “We obviously continued analgesic medication for five days for ethical reasons. We started to longe the horses in a walk and a trot, and on the first day we trotted them for 10 minutes and increased that up to 30 minutes after one week. One week after surgery signs of desmitis (ligament inflammation) were present, and then the horses were hand-walked until three months. In the long-term group, they were then slowly increasingly worked.

“This was very similar to what our rehabilitation protocol is for clinical patients,” she said.

All the while, starting on Day 1 for four consecutive weeks, the veterinarians treated the designated pair of each horses’ legs daily with the Class 4 laser with 2250 joules per lesion. They performed objective lameness assessments for ethical reasons, using the Lameness Locator.

Pluim said they monitored the lesions with ultrasound before surgery, the day after surgery, and once a week for four weeks. In the long-term group they monitored the lesions monthly for an additional four months, taking standardized video recordings and still images for one veterinarian to blindly evaluate. They measured the size of each lesion (surface, circumference, and transverse size); its echogenicity (by which they assess disruption of the normal ligament fibers); power-Doppler signal (which shows blood flow rates as different colors, helping reveal active signs of lesion healing); the surface and transverse size of the tendon; and swelling around the ligament.

The lesion size grew in all the limbs as expected in the acute phase, but “we do see that the lesion enlargement was significantly lower in the laser-treated lesions, and this was for both parameters, circumference of the lesion and the surface of the lesion,” said Pluim.

The Doppler signal was significantly higher in the treatment legs for the first four weeks of the study, indicating active healing during treatment.

Next, three blinded observers compared MRI images of the cadaver limbs of the short- and long-term treatment limbs, looking at the mean signal and the surface size and circumference of each lesion and tendon.

“So after four weeks in the short-term group and after six months in the long-term group, we saw that the surface of the lesion was significantly smaller in the treated lesions compared to controls,” said Pluim. “The mean signal is also significantly lower in the treatment group, indicating lower degree of tendon damage.”

Pluim said that after the two laser studies, she and her colleagues were very interested in analyzing the quality of the healing tissue at histological (microscopic) level. A publication of that work is on its way.

“I’m very excited to publish such great results on this innovative regenerative therapy, together with Tierklinik Lüsche, one of Europe’s largest equine hospitals, and the Faculty of Veterinary Medicine of Ghent University, which is No. 1 of the global Shanghai Ranking of Universities for the fourth year in a row,” she said. “The results of these studies show that high-power laser therapy is groundbreaking for tendon healing in horses.”

Note: Studies were approved by the Ghent University Ethical Committee. Return to ‘The Wild’ to Keep Horses’ Hindguts Healthy Pituitary Glands in Horses: One Size Fits All If you are interested in adopting this horse, please submit an ‘Adoption Inquiry’ via our website: Allaboutequine dot org. No…
07/01/2021
Total views: 391