Do You ‘Baby Talk’ to Your Horse? She Hears You 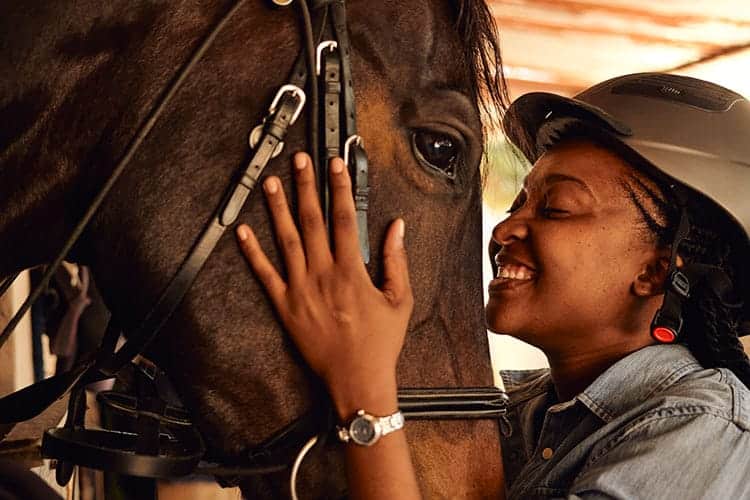 Do you talk to your horse? If so, your speaking style matters, according to new research by Lea Lansade, PhD, and colleagues from Université de Tours in France. The article, “Horses are sensitive to baby talk: pet‐directed speech facilitates communication with humans in a pointing task and during grooming,” was published in the March 2021 issue of Animal Cognition.

This is the first study to provide evidence that human speech style can affect equine behavior. Lansade was particularly interested in the use of pet-directed speech (PDS) with horses. PDS has the same sound qualities as baby talk (also called infant-directed speech [IDS], Motherese, and Parentese). This style of speaking has a distinctive vocal signature, with a high pitch and slow rate.

The research began with a social media survey. Most horse owners who responded to the survey claimed to talk to their horse using PDS, but fewer than half thought the horse was actually sensitive to it. The researchers then conducted two experiments with 20 Welsh mares comparing the effects of PDS and adult-directed speech (ADS). They found that:

A similar attention-grabbing effect of ‘baby talk’ is seen in infants and dogs.

PDS and emotional qualities of speech

In adult conversations words have meaning that create a rich story. Horses can understand some words, but as is true with dogs and infants, their vocabulary is limited. It makes sense that in real-life situations horses would tend to habituate and learn to ignore ADS.

Language is also loaded with emotional valence and tonal qualities. Lansade and colleagues suggested that PDS might capture a horse’s attention because it conveys information about the person’s positive emotional state and good intentions. Importantly, facial expression was explicitly linked to speech style in this study; the person wore a smiling face when using PDS and a neutral face when using ADS. The authors acknowledged that horses recognize and respond to relaxed, happy facial expressions in humans, which raises the question: Were the horses responding to the person’s speech style or facial expression?

This research takes an important first step toward understanding how human speaking style impacts communication with the horse, but it also raised some questions for me.

The Lansade study reviewed in this commentary has exploded on social media, which might reflect a growing interest in human-horse relationships and equine welfare. Lansade and colleagues at Université de Tours have published the following papers in the past year on emotions, communication, and human-horse interactions that might be of interest to the reader: Beautiful and very sound mare with trail, dressage and jumping experience. Looking for a home because she doesn’t like the…
01/09/2023
Total views: 973