Silvia Stopazzini and Lorenzo Lupacchini, along with Rosentolz 99 and longer Laura Carnabuci, became the first Italian vaulters to win a gold medal at a FEI World Equestrian Games. 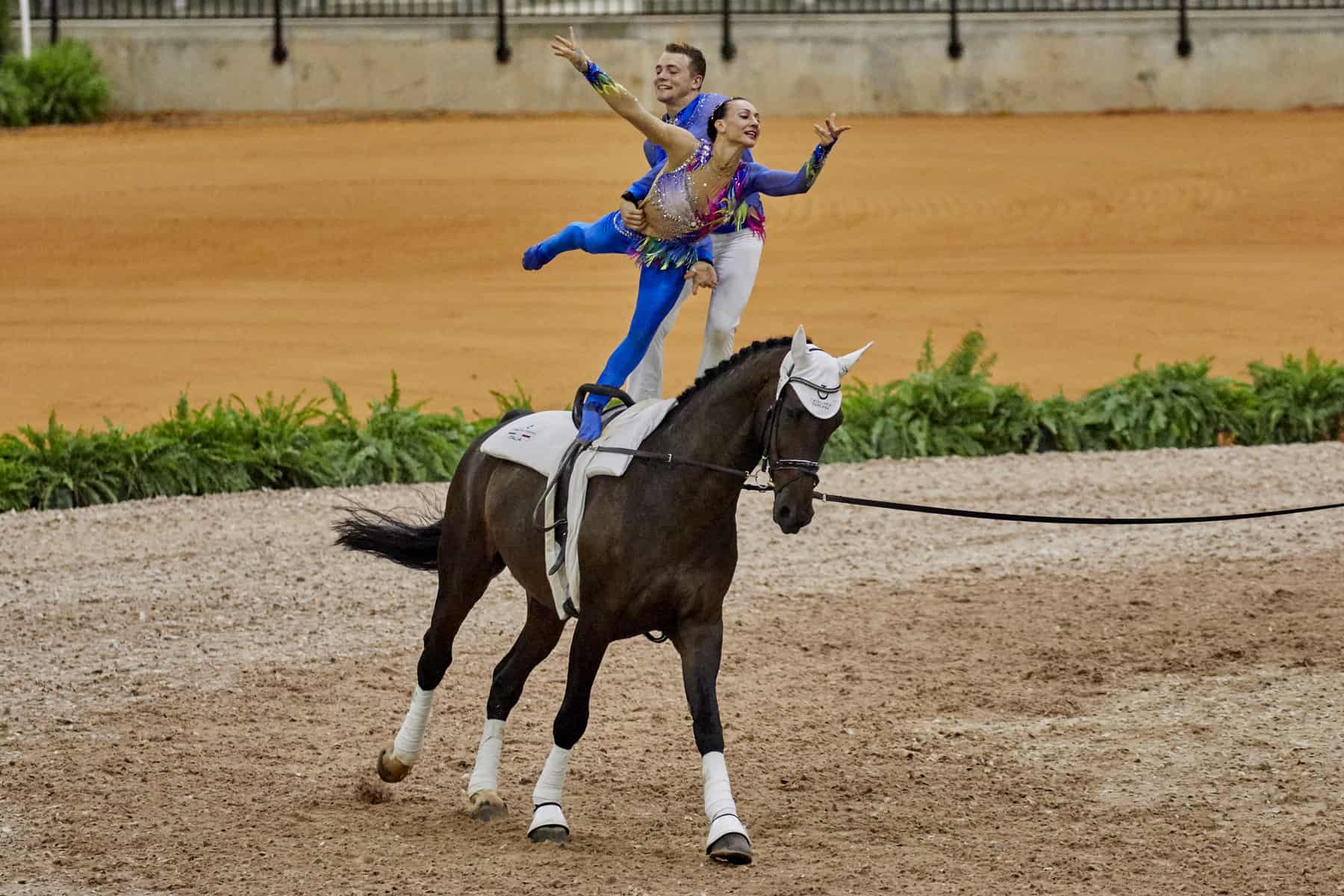 They performed a masterful rendition of their Salsa routine, with flawless execution, to secure the top step on the podium. Alongside their noble steed Rosentolz 99 and longer Laura Carnabuci, their names will go down in the history books for Italy as the first Italian vaulters to win a gold medal at a FEI World Equestrian Games on a score of 9.027.

“At the end of last year I broke my foot and we missed out on the FEI World Cup,” said Lupacchini. “It was then we decided that we would come back even better than before. Therefore we trained and trained and repeated the freestyle and we could not be more pleased with the result.”

Another imperative factor in their success: friendship.

“I think first of all we are friends, for me Lorenzo is really special because without him I wouldn’t be the same person that I am today,” said Stopazzini. “So I want to say thank you to him. We have a truly unique relationship. It is a beautiful emotion, we didn’t expect to win the FEI World Equestrian Games™.”

Pas de Deux legends Jasmin Lindner and Lukas Wacha (AUT) who achieved five years of dominance in the sport from 2012-2016 were unable to defend their title last year after Lukas suffered an injury. Leaders after day one, the pressure was on the defending champions. On-board Dr Doolittle with long-time longer Klaus Haidacher at the helm, the routine started with miss timing in the mount by Linder. Still, the pair kept their composure to perform with astonishing artistic impression. However, it wasn’t enough to fend off the Italians, finishing on a combined total of 9.013.

The bronze medal was awarded to Johannes Kay and Janika Derks (GER) on Dark Beluga longed by Barbara Rosiny. After the first round they narrowly sat 0.001 behind the Italians. Whilst the routine didn’t quite match the finesse of day one, their second round still proved breath-taking with their signature gravity defying final sequence leaving the crowd in awe (8.872).

The day got off to a flying start as the three squads who did not participate in the inaugural National Team Championship performed their first-round freestyles. Team Brazil finished on a combined score of 6.519 ahead of Team Argentina (5.710) and Team Russia (5.401). They slot into the squad leader board in 9th, 11th, and 12th respectively.

The squad competition conclusion will take place on Saturday when the class will resume as normal. With only 0.001 separating current leaders Team Germany and second-place Team Switzerland, it’s sure to be an exciting finale.

Bringing back together both nations and non-nations individuals for the final two rounds, the top 15 individual female and male athletes lined up to tackle the tricky technical test portion of the competition.

After three rounds Germany’s Kristina Boe remains in the lead by the narrowest of margins. After her emphatic gold medal win last night as part of Team Germany, she put on an assured, character driven interpretation of her Shark technical test. Whilst she scored an impressive 7.986, it was the second highest female technical score of the day.

It was the unprecedented control and tenacity of Boe’s fellow compatriot Janika Derks, which resulted in her leading the technical test round (8.077). On Carousso Hit with renowned Jessica Lichtenberg on the longe, this vital performance sees her ascend the leader board to currently occupy the bronze medal position (8.228). In the overall standings after three rounds, Lisa Wild (AUT) maintains her second-place standing (8.229).

In the male category Lambert Leclezio (FRA) was in a league of his own, once again pushing the limits and breaking the mold of the sport with a score of 8.572.

After three rounds Jannik Heiland (GER) maintains his silver medal position on the competitive score of 8.483 after a harmonious display of his war horse technical test. Jannis Drewell (GER) currently rounds out the podium (8.441), whilst Thomas Brusewitz drops from the gold medal position down to fourth place after technical test (8.421).

Results are available at: