What Happens To Sleep-Deprived Horses? They Collapse

All horses need deep sleep overnight that requires lying down completely. Stall size, bedding, and stress can cause horses to get insufficient rest. 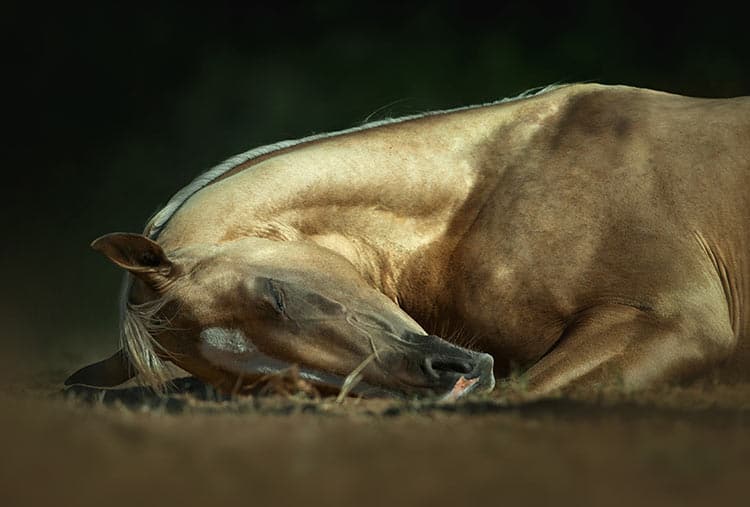 Horses don’t sleep much, but that doesn’t mean they don’t need it. Horses that don’t get enough deep sleep—the kind that requires lying down with the whole body or at least the head against the ground—can collapse from fatigue, according to an equine veterinary behaviorist.

“The most important thing is that when horses are in that kind of sleep, either lying on their sides or resting their head, they can go into dream sleep, and all their muscles relax—which means that if they are not lying down, they fall down,” said Katherine Houpt, VMD, PhD, Dipl. ACVB, professor emeritus at Cornell University’s College of Veterinary Medicine, in Ithaca, New York. Houpt spoke about equine sleep deprivation at the 2nd Conference of the Avenches National Equestrian Institute (IENA), held Sept. 11, 2021, in Switzerland.

Horses spend about six hours sleeping every 24 hours, and most of that sleep happens during the night. All equids have a soft tissue “stay apparatus” that locks their legs so they can sleep standing up, but that only allows a light, slow-wave sleep, Houpt said. Horses also spend about 25% of their sleeping time in rapid eye movement (REM) or dream sleep—around an hour and a half a day in many short bouts, she added. When they enter REM sleep, they need to be lying down, because all their muscles—including the stay apparatus—relax.

Even so, some horses go into REM sleep standing up, she said. When that happens, their legs buckle under them, and they drop to the ground, usually onto their knees.

“That is a clinical problem,” said Houpt. Horses tend to injure their knees and fetlocks during such falls, she explained.

Why Do Some Horses Not Lie Down?

Horses that don’t lie down before starting REM sleep might not like their sleeping environment, said Houpt.

Bedding might be one reason. While stalled horses seem to show no preference between straw and shavings in a choice test, they lie down on their sides considerably longer every day when they’re housed on straw, “which means they are sleeping more,” she said.

Horses also spend more time lying down when their bedding is deeper and thicker. “If you can afford it, then using more bedding is better,” she said. Otherwise, you can place the new bale of straw or shavings in a pile and let the horse lie down on that before spreading it out naturally themselves, she added.

As for concrete, horses, when given a choice, never lie down on such a hard surface, she said.

Pastured horses, Houpt added, might spend more time lying down than stalled horses do. In her observations, horses with little bedding in their stalls would lie down regularly to rest and sleep in pasture. “I think it depends on if there’s just dirt—and the horse won’t sleep—or nice, soft grass,” she said.

Stall size is also a possible issue, Houpt said. One Holsteiner mare she observed refused to lie down despite ample bedding, and nighttime video recordings showed her collapsing to her knees in the middle of the night. When the owners opened her stall up to make it twice as wide, the mare started lying down to get a good night’s rest.

“This mare is huge, and she was in a smaller stall and was reluctant to lie down,” Houpt said. “So instead she would go to sleep standing up and fall.”

Pain could be another factor, said Houpt. Horses in pain might refuse to lie down because getting down or back up might cause too much discomfort. That’s particularly true of aging horses as they start to experience pain and stiffness from arthritis.

“We can use painkilling products and sometimes psychoactive medication to try to improve horses’ willingness or physical ability to lie down,” she said. “It’s often trial and error to see what will help that particular horse.”

Stressed horses also tend to sleep less, skipping out especially on deep sleep, Houpt said. As such, owners of show horses should be aware that their horses might not get enough sleep when they’re traveling to new places.

Equipped with modern technology, owners of sport and leisure horses alike can—and should—monitor their horses’ sleep cycles, said Houpt. Video cameras or wearable monitors can give owners valuable feedback about whether their horses lie down at night and for how long.

“I think that now that everyone (can have) a camera on their horses, we will find there are some horses who never lie down,” she said. That’s the case of her own 27-year-old Arabian mare. “She’s probably living on a very small amount of REM sleep,” she said.