If you suspect your horse’s hair whorls have something to do with his personality, you might be right. 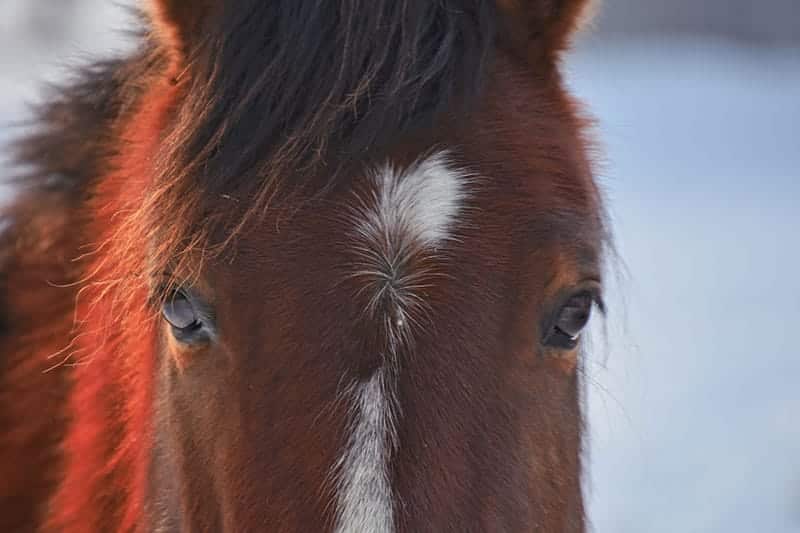 If you suspect your horse’s hair whorls have something to do with his personality, you might be right. For the first time in any species, scientists have found a possible genetic link between whorls and behavior—and they found it in Quarter Horses.

Using sequencing techniques, Brazilian scientists revealed the likely genomic regions responsible for hair whorls. These regions code not only for follicle growth but also for neurologic and behavioral functions, suggesting a genetic-biological link between whorls and temperament, said Gregório Miguel Ferreira de Camargo, PhD, of the School of Veterinary Medicine and Animal Science at the Federal University of Bahia, in Salvador, Brazil.

The findings confirm what many horse people have long suspected about the various swirling hair spots on horses’ heads and necks, he said.

“It has been already reported that horses with whorls above the eye line are more difficult to handle in comparison to the ones with whorls in the eye line or below,” said Ferreira de Camargo, citing previous studies. “Whorl traits and behavior are associated. This correlation, in genetics, might be caused by two factors: linkage (two separate genes are inherited together) and/or pleiotropy (a single gene code for two separate traits).”

Ferreira de Camargo and his colleagues genotyped partial genomes from 342 Quarter Horses to find candidate genes responsible for the number and location of whorls on the head and neck. They found genomic “windows”—regions likely to be related to these traits—that, together, explained up to 80% of the whorl genetic differences in individual horses, depending on the trait.

Those windows included many genes related to hair follicle growth, Ferreira de Camargo said. But interestingly, he said, some of those same genes also had known neurologic and behavioral functions. For example, gene KLF5 on chromosome ECA17 appeared to be associated with the location of whorls on the head (either above, at, or below eye level). In humans, this gene controls hair follicle repair and regrowth, but it’s also known to be associated with chronic schizophrenia. And the number of whorls on the head appears to be at least partially determined by gene SIRT1 on chromosome ECA1. This gene is expressed in the hair follicle and has been associated with depression and schizophrenia in previous studies. Other candidate genes in windows related to the number of whorls correlate with neurologic disorders such as Parkinson’s disease, he said.

“These genomic regions are definitively associated to whorl formation,” Ferreira de Camargo told The Horse. “We are sure because we used whorl phenotypes and not follicle growth phenotypes. So, we precisely addressed the variation based on whorls.”

The results were no surprise for Ferreira de Camargo and his team, he added. “In fact, we expected to find genomic regions that could be used to explain the association by linkage or pleiotropy,” he said. “Fortunately, we were able to launch some hypotheses about the physiology behind the association of whorls and behavior.”

Future research should aim to carry out genome-wide associations between whorls and temperament and detail the genomic regions identified in the current study, said Ferreira de Camargo.

Studies correlating whorls with performance traits—racing, jumping, or dressage ability, for example—could also be an important research path, he added. Such research “could provide more practical results of whorls and even the development of genetic tests for selection,” Ferreira de Camargo said.

We have an "AMAZING Lineup" of exciting and available Thoroughbreds for you to meet. They have been rehabilitated, retrained and…
08/06/2019
Total views: 28884