Report from the Fifth International Conference on Large Animal Rescue

This week I will be posting several updates from the Fifth International Conference on Large Animal Rescue held this week in Adelaide, South Australia, at the Roseworthy Campus, Veterinary School (the home of Australasia’s newest cutting edge Equine hospital as well).

Jim Green has worked tirelessly for many years in the United Kingdom to bring large animal technical rescue techniques, methods and tactics to the forefront of the fire service and to involve veterinarians, humane officers and other stakeholders who are involved in the operational “business end” of performing rescues. But his discussion to the pre-conference managers and executives at the Fifth International Conference on Large Animal Rescue held this week in Adelaide, South Australia focused on the risk assessment tools that it took to change attitudes within the fire service about performing these services to the public within the U.K.

Jim said that the immediate need for firefighter safety was the lever that was understood to “lift the rock” – necessary to get the fire service involved in finding better ways to protect their personnel. They started taking a look at the dangerous practices that were being utilized on large animal rescue scenes and the traditional response in which this was viewed as a “soft” humanitarian service for animals and their owners. For many years the fire service had “gotten away with it” by relying on members from rural agricultural backgrounds, whose livestock experience helped 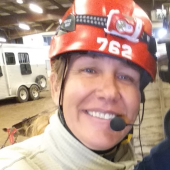 Be A Hero To Your Horse: Proactively React To Wildfire Danger Attitudes and Accidents with Horses How Can We Facilitate First Aid Education?