The rule that would prohibit the use of action devices; boots, other than those used for protection; and pads, except for those used for therapeutic reasons, on Tennessee Walking Horses and Racking Horses at shows, exhibitions, sales, and auctions. 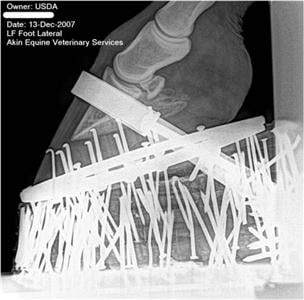 An amendment to the Farm Bill would instruct Secretary of Agriculture Sonny Perdue to publish and implement a USDA rule change frozen just as the Trump administration took office. But some of the amendment’s critics believe it sets a dangerous precedent because it shortcuts the rule review process.

Last year the USDA approved a final rule that would prohibit the use of action devices; boots, other than those used for protection; and pads, except for those used for therapeutic reasons, on Tennessee Walking Horses and Racking Horses at shows, exhibitions, sales, and auctions. The ban on action devices was slated to take effect in February 2017 with all other provisions becoming effective on Jan. 1, 2018. However, the rule was among several frozen by President Donald Trump’s 2017 executive order to allow the new administration time to review and seek advice on new regulations.

On May 11, Representative Tom Marino (R-PA) offered an amendment to HR 2, the Farm Bill of 2018, which would fund the USDA through 2023. Marino’s amendment instructs Perdue to submit the final rule for publication in the Federal Register and for the Office of the Federal Register to publish it. The amendment also orders the USDA to implement most provisions in the rule no later than one year after the Farm Bill is enacted.

However, Mike Inman, chief executive officer of the Tennessee Walking Horse National Celebration, believes that the amendment represents an attempt to circumvent the Presidential order.

“(Trump’s) action, similar to that of the Bush and Obama administrations, is designed to allow the various departments to review these rules and advise the President accordingly,” he said. “It is a very surprising and detrimental precedent to attempt to set. We will be watching closely (the) response to this attempt.”

If you are interested in adopting this horse, please submit an ‘Adoption Inquiry’ via our website: Allaboutequine dot org. No…
07/01/2021
Total views: 2795