The study measured a number of aspects of the flapless saddle system; this is only the first paper to draw on this research. Published by Dr. Clayton earlier this month, her manuscript concludes that the flapless saddle results in a marked improvement in rider stability.

“Significant” reductions in rider motion in all four directions

June 28, 2018 — Dressage hotbed Wellington, Florida was chosen as the site to study the revolutionary flapless saddle by EQ Saddle Science. The depth of talent available at the Winter Equestrian Festival made it the ideal location to assemble an international research team,  led by the world-renowned Dr. Hilary Clayton.

EQ Saddle Science founder Carmi Weininger, a competitive dressage rider and instructor, created the first flapless saddle as a weight-saving idea. She soon noticed that the saddle had a profoundly positive effect on the horse, the rider, and their connection. She said, “I believe that if an effect is happening consistently, it can be measured. When we noticed that riders in our flapless saddles were sitting more correctly and horses were moving with more freedom and expression, we didn’t know why, exactly, but we knew that it would be possible to find out.”

Based on the same dynamic flexing panels as sister brand ReactorPanel Saddle Co., the EQ flapless system delivers an instant increase in rider stability, while riders praise many things: improved connection, ease of sitting trot, freedom for the shoulders, and even higher marks at shows. Weininger said, “Although riders in our test sessions instantly fell for our saddle design, we were clear that to have an effect on the dressage world, we needed to have proof of the effect, and also support from top professionals. To start, we decided to collect as much data as possible, and engage the best expert we could find to help us determine which results might be statistically significant.”

Enter Dr. Clayton. In a chance encounter between Weininger and Clayton at a meeting of the International Society for Equitation Science in Vancouver, Weininger confided that a saddle she was developing seemed to be making a significant difference for nearly every horse and rider who tried it. Clayton was intrigued, and was willing to help design and conduct a study. Alexandra Hampson, a presenter at the same conference, was added to the team, bringing her groundbreaking Novell-Pliance computerized pressure measuring system; the only such system to be validated for research. Over the next few months, the location in Florida was selected, and Dr. Meg Sleeper, cardiologist, was engaged to round out the research group.

The study measured a number of aspects of the flapless saddle system; this is only the first paper to draw on this research. Published by Dr. Clayton earlier this month, her manuscript concludes that the flapless saddle results in a marked improvement in rider stability.

Weininger went on to say, “We are thrilled that the study is out, and the full results released. To top it off, we are honored to have earned the trust and support of professionals such as Olivia Lagoy-Weltz, Allison Brock, Jennifer Marchand, and Bettina Drummond – among many others – in the process of creating this saddle.”

The study was performed on five dressage horses: three European warmbloods, one Thoroughbred-warmblood cross, and one Lusitano; all
in full-time dressage training, working between USEF fourth and FEI Grand Prix levels. They ranged in age from nine to sixteen, and height from 15.3 to 18.0 hands. All were ridden by the same professional dressage rider, to reduce variability in the data, avoid bias introduced by using multiple riders, and ensure consistency of the motion patterns. In this case, the rider was Jennifer Marchand, who actively rides and trains up through the Grand Prix level on multiple horses.

The “order of go” as to which saddle was tested first for each horse was randomized by computer, and each saddle was placed on a
Pliance electronic pressure mat with 128 embedded pressure sensors. The pressure sensors recorded how the rider’s weight distribution varied throughout the exercises, transmitted in real time via Bluetooth to a laptop on the side of the arena. Those pressure readings were later analyzed for range of motion both front-to-back and side-to-side.

A 20-meter section of the long side of the arena was marked with stakes one meter apart, and that is the section where data was gathered, to remove variability of turning or bending. Slow motion videography verified that the horses did not have a significant change in velocity.

Each horse/saddle combination was subjected to this protocol to reduce variability: careful and slow girthing from both sides, mounting using a high block, and warming up for fifteen minutes with each saddle. After warmup, each horse performed a pre-determined pattern of movements that included walk, sitting and rising trot, and cantering on both leads around a dressage arena in clockwise and counter-clockwise directions. All gaits were studied in both collected and extended forms. Then all was repeated immediately – from tacking protocol to warmup – using the other saddle.

Range of motion from side to side was significantly smaller in all six gait types (walk/trot/canter in collection and extension) when riding in the flapless saddle. The rider’s range of motion in the front-to-back direction was smaller in all six gait types as well, but with statistical significance in collected trot, extended trot (video of study data as it recorded), and extended canter, due to there being a noticeable braking force front-to-back each time a trot stride lands, which causes more difficulty in maintaining stability front to back in that gait. A similar difficulty can be felt in extended canter, although more due to the energy and size of the strides rather than braking.

Why Stability is Important

Rider stability is considered a key marker of advanced equitation, whether it be for trail riding, reining competition, show jumping, or dressage. The more the rider “makes it look easy” by sitting in serene balance, the better the rider is considered to be – by both fellow riders, and the horse! It is possible that a more stable rider creates less work for the horse, who can then more easily maintain balance; the same study indicates that horses may have a significantly lower heart rate in the EQ flapless saddle than in their own saddles.

For more information or to schedule a fitting or free two-week trial, please visit EQsaddlescience.com.

EQ Saddle Science exists to make it easier for horses to carry humans with ease and in harmony, and is an organization as unusual and high-quality as the saddles they make. Their flapless flexing saddles are patented, and represent a true revolution in the sport horse world. Riders and their horses are constantly changing, and the conventional approach to saddle design does not address this dynamic, resulting in saddles that can’t evolve with the horse and rider. Over time, these conventional saddles, no matter how high-end or how frequently re-fitted and -flocked, may hinder freedom of movement, skill development, and training progress. EQ Saddle Science’s proprietary flexing panel technology provides a better outcome for both horse and rider than conventional tack allows, with innovation based on horse and rider biomechanics, and extensive verification of the remarkable functionality of our saddles with scientific testing.

Product and information releases by various organizations and companies. 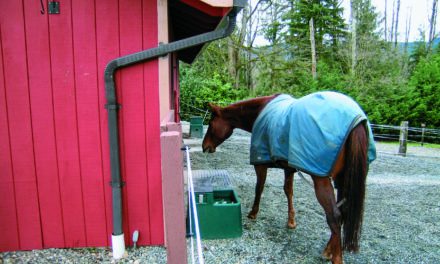 Fall Checklist for Preparing Your Horse Property for Winter

Is Your Horse Trying to Tell You Something?