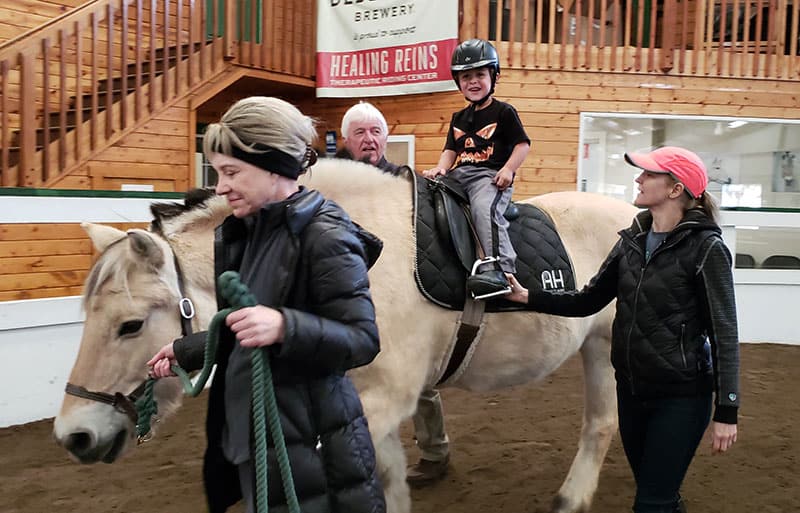 Therapeutic horseback riding combined with brain-building exercises can improve the dexterity, coordination, and strength of children with neurodevelopmental disorders, shows a study in Frontiers in Veterinary Science.

Neurodevelopmental disorders, such as attention deficit hyperactivity disorder (ADHD) and autism spectrum disorder (ASD), affect as many as one in six American children. Physical activity is known to benefit these patients in a variety of ways, but this is the first study showing the short- and long-term effects of a program combining horseback riding and cognitive training.

“We wanted to investigate how a combination of equine-assisted activities and various brain-building tasks, administered by a speech therapist, would affect motor skills in children with disorders including autism spectrum disorder and attention deficit hyperactivity,” says Brandon Rigby, PhD, MS, of the Texas Woman’s University, in Denton.

“Our findings should be helpful to therapists and other health care professionals who are tasked with implementing strategies and interventions to improve motor skill proficiency in children and youth with ADHD and ASD, which were the most common diagnoses in our study.”

For their study, Rigby and his collaborators recruited 25 children with neurodevelopmental disorders between the ages of 5 and 16. Each child completed one of several programs ranging in length from eight weeks to one year. The programs included weekly introductory horseback riding, as well as sessions with a speech therapist two to three times per week.

During the horseback riding, the children learned about horse anatomy, riding equipment, and the basics of riding. The brain-building activities focused on exercises that train the brain to process sensory information such as sound, sight, balance, and spatial orientation. These sessions included music therapy, eye tracking exercises, and hand-eye coordination tasks. The children and their parents were also given daily exercises they could perform at home.

After eight weeks of the program, the children showed improved motor skills, although there was sometimes a delay before the changes became apparent. For the participants that continued the program for one year, these benefits continued for the duration of the study. These participants also showed improvements in their behavior and academic performance, including social and communication skills. Additionally, anecdotal responses from parents and caregivers suggested that the children were more positive, focused, and calm both in and outside of the program.

Given the small study size, larger-scale research is still needed to better understand the potential benefits to the range of neurodevelopmental disorders. Some limitations include the participants’ varying diagnoses (as opposed to looking at benefits per ADHD or autism specifically) and the allowance to continue prescribed medications or therapies outside the scope of the program. Despite this, the program’s results are promising, and the researchers hope this will inspire further interest in cross-disciplinary programs.

“These findings may allow for a greater demand for these programs, ultimately making them more accessible and affordable,” says Rigby.