Ride along with two BLM mustangs as they and their riders explore Bryce Canyon National Park. For several decades, I have seen photos and heard stories about trail riding through Bryce Canyon National Park, in Utah. Ever since I visited the park as a child on a family vacation, I have wanted to return. As an equestrian adult I have wanted to visit the area with horses. However, while my husband, Matt, and I often trail ride, we are not at the caliber of backcountry riders or packers, so I didn’t know if we could do a Bryce Canyon ride.

But in recent years, we have ended up with a pair of nice mustangs that are great on trails with a fair number of miles and experiences under their respective saddles.

When COVID struck this spring, we canceled travel plans for the year, intending to just hunker down. About the time late August rolled around, we realized that camping and visiting the outdoors still offered a safe option—and if we wanted  to do anything, we’d better get busy and make it happen. So, we carved out four days in late September, just a few weeks away, and planned a camping trip to Bryce Canyon National Park with our mustangs, Mesa and Stellar.

History of the Park

The park’s geology is like no other: The forces of wind, rain, erosion, and time have worked magic on the clay and sandstone deposits left from prehistoric times, when the area was once the bottom of a lake. Iron and mineral deposits in the rocks give the cliffs their vivid palette of colors in shades of red, orange, and pink that glow in the nuances of light. 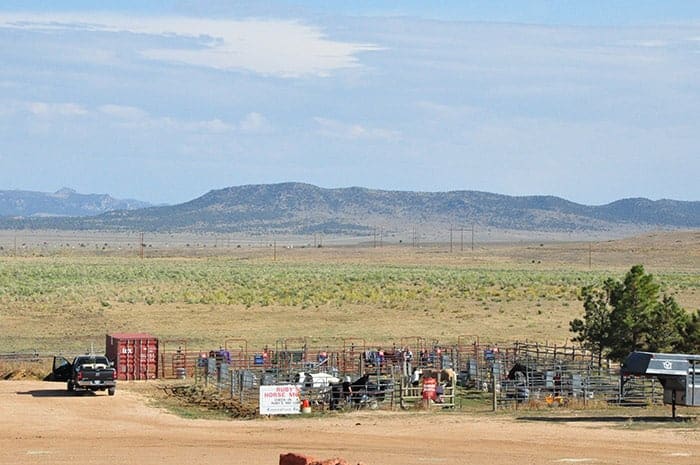 Our first step was to figure out equestrian trail options in Bryce Canyon. We called the park to learn about the process, check rules and regulations, and make ride reservations.

Next, we needed to figure out accommodations for our horses and ourselves. The forest service does provide equestrian campgrounds, but these do not allow advanced reservations. Several equestrian campgrounds and horse motels are listed online and, in the end, The 12-by-14-foot panel pens each have stock tanks for water and a long hose from the spigot to fill them. The area also has full hookups for those with living quarter horse trailers.

We also booked a nearby campsite for ourselves at Ruby’s Inn RV Park & Campground, also in Bryce Canyon City and just half a mile from where our horses stayed. Ruby’s Inn offers a variety of choices, including RV camping, tent camping, cabin or teepee rental, and hotels. There are lodging, camping, and restaurants in the national park, as well, plus camping outside the park in Dixie National Forest. Because Bryce Canyon is one of the busiest national parks, reservations are recommended. On a couple of nights during our stay, we noticed signs that said “no vacancies” everywhere. Barely 10 days prior to our adventure, we scheduled a trip to the veterinarian for the required health certificates and Coggins tests. We also bought certified weed-free hay and began transitioning it into our two horses’ diets to switch them over from their normal hay for the trip. (Weed-free hay is important so weed seeds don’t get carried into a pristine environment.)

As we neared the start of our trip, we began organizing and packing our camping and personal gear, meals and snacks, and items we would need to keep the horses safe and comfortable. We were especially grateful for waterproof, midweight blankets for the horses, as the elevation gain meant cold nights (down to the mid-30s!) and inclement weather. Many horse motels, including the one we booked, simply offer outdoor panel pens, so turnout blankets can help keep horses warm and dry. We also stored extra water in our trailer and brought hay bags for the horses to eat from so they wouldn’t have to eat off the dirt at the horse motel.

At that point, we only had a 10-hour trailer ride through Idaho down to Utah’s southern border. We found our horse motel, got our horses settled in, checked in at our campsite, and got ready for our big trail ride the next day.

At our designated departure time of 12:30 p.m., with dark rain clouds overhead and low rumbles off in the distance, we cautiously set out from the staging area and headed through a pine forest to the trailhead at the canyon rim. Tree branches rustled as the wind picked up, whipping our rain gear around and stirring up a couple of deer, which bounded across our path. Fortunately, our seasoned mustangs remained nonplussed, which was reassuring.

As we approached the canyon rim, we were met by tourists of all types. Some walked the path and peered over the rim railing. Kids raced around while their parents pushed strollers. Hikers carried backpacks and cameras. But all of them parted way when they saw us crest the rim.

Before us was the scene now etched in my mind: an amazing canyon stretched out below our feet and far beyond. Decorated in themes of red, orange, and pink, giant rock hoodoos stood like an army of timeless warriors keeping watch along canyon walls, silently guarding the valley floor below. The beauty and strangeness of the spectacle, along with the wind howling and raindrops starting to fall, were almost too much. Ferde Grofe’s “Grand Canyon Suite” played in my head as we took our first tentative steps down the steep trail. Our steady mustangs willingly put one hoof in front of another, and we descended into this beautiful, awe-inspiring world.

The ride was so intoxicatingly beautiful that we quickly ran out of words to describe the wonder of it all. We joked that around every corner every bend was another “wow” moment. Riding through it on our good mustangs felt like an immense privilege. I was deeply grateful for the opportunity to be a part of such a unique landscape. What a gift to experience it up close and personally, examining brightly hued rocks, seeing unusual native plants, following shadows, and feeling the sun play on our faces. Our horses seemed to share in our joy as they walked along steadily, ears pricked and surveying everything.

The funny thing is that having had this experience did not satisfy me, it just made me hungry to do more! Now we want to head back to the Bryce Canyon area to ride in more of the spectacular landscapes that surround the park—and perhaps try other wild areas of our beautiful American West, with our trustworthy mustangs Mesa and Stellar in tow.

Tips for Planning a Trip to Bryce Canyon National Park

If you would you like to horse camp and ride Bryce Canyon National Park, here is a step-by-step guide for planning your trip: