Just because a horse survives a barn fire doesn’t mean he’s out of harm’s way. 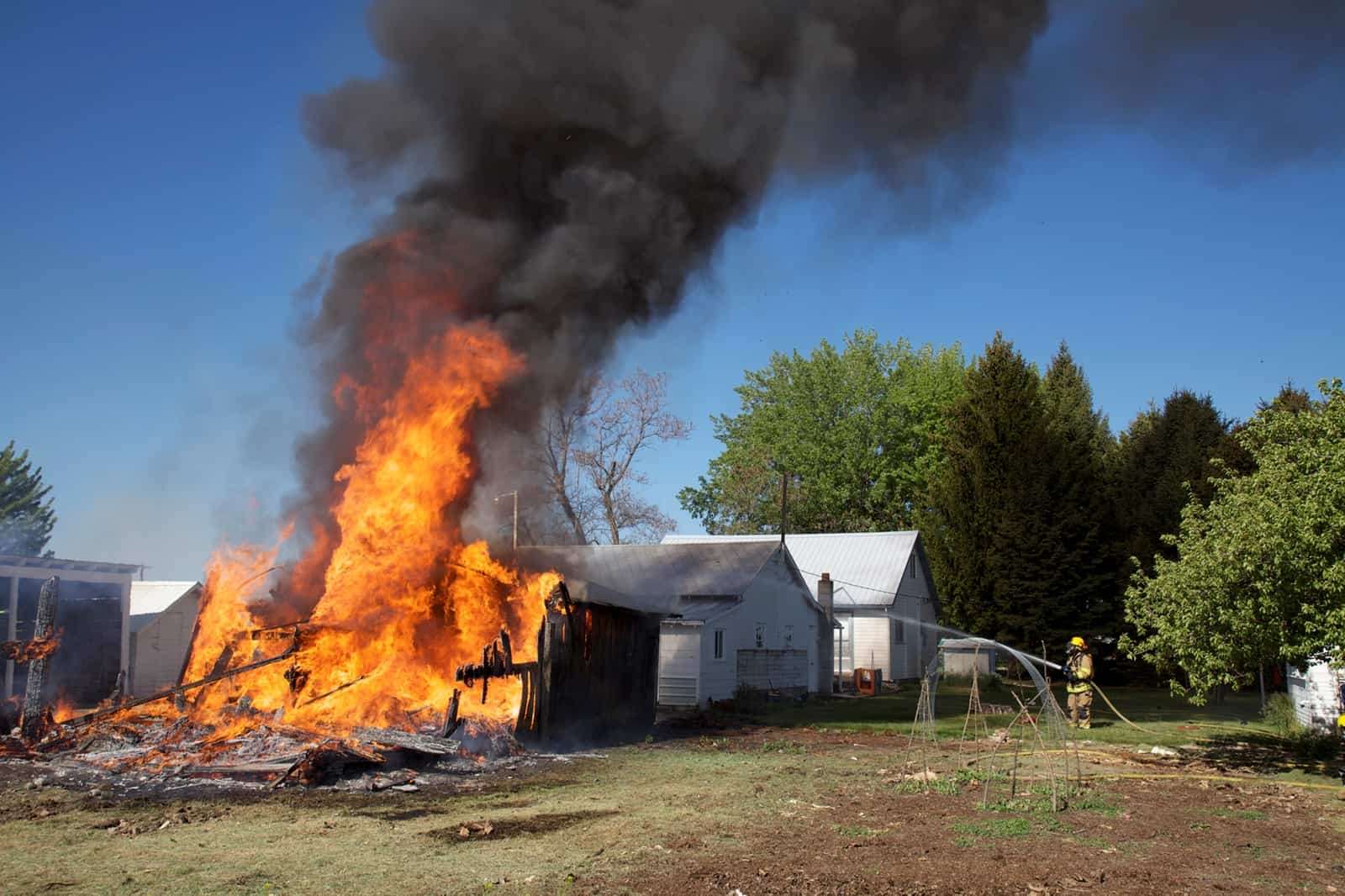 In March 2016, Grateful Pride was in training at the South Florida Trotting Center, in Lake Worth, Florida, when fire swept through his barn. Amid the flames and the smoke and the chaos, the 2-year-old Standardbred broke out of his stall and galloped to another barn on the Trotting Center campus.

“He was evidently looking for a safe place to go,” recalls Grateful Pride’s trainer, Jeff Stout. “He’s a smart horse. Really, he saved himself.”

All told, grooms, farm managers, and trainers were able to rescue 11 horses from the blazing barn before the building’s roof caved in. The 12 horses still inside died.

Scott Swerdlin, DVM, MRCVS, president of Palm Beach Equine Clinic, in Wellington, Florida, says Grateful Pride was lucky to survive not only the blaze but also the complicated recovery process. In his more than 30 years of practice, Swerdlin has treated several fire survivors, including two injured in a high-profile barn fire at the Gulfstream Polo Club in 2013 that claimed eight Thoroughbreds.

“Only about 40% of horses involved in barn fires survive,” he says. “And of those, only 15% make full recoveries—that is, that they can return to the work they did before the fire.” Recovery can take more than a year, he adds, and become very expensive.

Even post-recovery, says Swerdlin, many still bear the scars of the experience; they’ve sustained serious injuries ranging from burns to smoke-related respiratory issues, many of which have long-term debilitating consequences. But burns top the list of most common barn fire injuries among survivors, says Swerdlin’s colleague, Bryan Dubynsky, DVM.

Burns are categorized as first-, second-, third-, and fourth-degree, depending on the layers of skin and tissue affected. First-degree burns damage the first layer of skin, causing superficial skin and hair loss but no blistering. These burns generally heal quickly and with minimal treatment. Burns that involve the first and second layers of skin are categorized as superficial partial-thickness burns. Those that injure deeper skin layers are second-degree deep partial-thickness burns. Second-degree burns are generally not life-threatening, but they require cleaning and more involved treatment, especially when blisters break.

Third-degree or full-thickness burns injure all layers of the skin and the tissue beneath. Finally, fourth-degree burns penetrate all skin layers and damage muscles, ligaments, tendons, nerves, blood vessels, and bones. Both third- and fourth-degree burns can be life-­threatening.

In addition to its depth, a burn’s severity depends on how much flesh is affected. Dubynsky says most barn fire survivors sustain burn injuries over the back, withers, and croup. And that’s exactly where Grateful Pride’s burns were.

“Grateful Pride had a burn down the center of his back 6 inches wide and 12 inches long,” Stout recalls. “It was not a deep burn, but I cannot imagine that kind of pain.”

That’s because healthy skin regulates both the body’s surface temperature and its fluid retention. When a horse sustains a burn injury to the skin, he might lose that regulation mechanism. The horse can also lose fluids simply due to skin damage.

Practitioners also administer analgesics to manage pain, antibiotics to ward off infection, and salve to promote healing. They might also prescribe hyperbaric oxygen therapy, which delivers pure oxygen to promote wound healing and treat respiratory issues. But such treatment is expensive (anywhere from $300-1,000 per session), Swerdlin says.

“If you have access to it and if you can afford it, it can have value,” he says.

“Every day we treated his back, gave him Bute (phenylbutazone) for pain, and put salve on him to treat the wounds,” he says. Horses that survive barn fires breathe in smoke, toxins, and even carbon particles that fill the air during the fire. The resulting smoke inhalation and carbon monoxide exposure put them at risk for respiratory complications immediately after the fire as well as long-term.

But unless a horse develops pneumonia or has a lung abscess, the animal’s respiratory system usually recovers well from insult, says Swerdlin.

Even so, veterinarians might administer oral or intravenous antibiotics to fend off the possibility of infection.

At the same time, veterinarians might use nebulizers to help clear and medicate horses’ lungs, says Rose Nolen-Walston, DVM, associate professor of large animal medicine at the University of Pennsylvania School of Veterinary Medicine’s New Bolton Center, in Kennett Square.

Nebulizers use oxygen, compressed air, or ultrasonic power to break up solutions into small aerosol droplets and deliver them to a horse’s airways via a mask. Nolen-Walston says owners can use nebulizers to administer preparations ranging from simple saline solution, which loosens particles in the lungs, to decongestants and bronchodilators such as clenbuterol.

Veterinarians also rely on bronchodilators if the horse has pneumonia, a condition fire survivors are particularly susceptible to, says Nolen-Walston.

Grateful Pride received nebulizer treatment to improve his breathing, which was labored following the fire.

“There’s no way of telling if the horse had long-range lung damage from the fire, and we don’t know how long he was in the barn before he made the decision to escape,” Stout says. “So we gave him the nebulizer treatments, and little by little he began to improve—there’s no downside to this treatment.”

Even so, when the horse returned to harness racing a month after the fire, Stout was not convinced that his respiratory system was sound.

“It seemed that his breathing was just not right,” Stout says.

So Grateful Pride took a trailer ride up to New Bolton Center for an evaluation and a tracheal wash, a procedure in which the veterinarian uses a fiber-optic endoscope and catheter and fluid to collect respiratory secretions. The practitioner places a sample in a growth plate and observes it to detect and identify pulmonary pathogens.

“Some things you can see immediately (in the sample), such as if there is carbon or something else in the horses’ lungs,” Stout says. But there was no foreign debris in the sample and nothing grew in the culture, so there was no infection. “What they found was that the horse had allergies that were complicating his breathing. Whether those allergies are related to the fire we don’t know, but now they’re making up a (medication) especially for him that will treat his allergies.” Other side effects of fire and smoke exposure are not as obvious as burn wounds and labored breathing. For example, barn fire survivors might refuse to eat because their throats are sore from heat exposure, and their healing burns—no matter how superficial—are painful. As a result, they lose weight, some more quickly than others.

Nolen-Walston says veterinarians battle appetite loss by making sure horses get a diet that will be palatable or even tempting to them.

“That means good-quality hay and an appropriate amount of grain,” she says. “Also, if horses have pretty bad burns, they may need more protein in their feed.”

This can help the horse regenerate skin, repair damaged muscle, and build muscle where it might have been lost due to injury or inactivity.

Owners might soak hay in water to soften it and reduce dust that could irritate healing facial burns or respiratory injuries.

As always, feeding regimens should be matched to the individual horse’s needs.

“For example, if the horse is a performance horse that has already been on a high-protein feed, you might want to back off on adding additional protein to the diet,” Nolen-Walston says.

Skin injuries can be really itchy as they heal. Nolen-Walston says a combination of topical treatment and pain management can help promote healing by reducing the horse’s urge to scratch.

“Horses are usually pretty good about this,” Nolen-Walston says, “But if they are especially itchy, we cover them in silver sulfadiazine cream, which is an antibiotic, and we can also give them a painkiller that includes an opioid like morphine.”

Though veterinarians have remarkable tools at their disposal to help wounds heal, they cannot overcome the fact that some horses’ skin will be so damaged that they’ll never return to the work they did before the fire.

“Healing can produce thick scarring, like leather, that makes it impossible for the horse to wear a saddle,” Dubynsky says. “At that point, horses may not ever return to their use as performance, polo, or racing horses.”

Stout says Grateful Pride was fortunate. The horse did return to racing.

“We hand-walked him for a few weeks, and little by little he improved,” Stout recalls. “Eventually, we put a harness that we had padded on him and entered him in a race.”

Even though Grateful Pride was able to return to the work he did before the fire, Stout believes he continues to display long-term effects from the event.

“For example, he’s very sensitive at the places where his skin was burned,” Stout says. “I think the horse will always be sensitive, even though the burns have healed.”

Stout also believes that not all of Grateful Pride’s scars are physical.

“He was a good patient, but it took us 15 minutes to get him back into his stall for the first time (after the fire),” Stout says. “It’s as though he was conflicted between the stall being a place of safety and a place of danger. It took 10 days before he would go in more easily.”

Healing can produce thick scarring, like leather, that makes it impossible for the horse to wear a saddle.
Dr. Bryan Dubynsky

It is impossible to talk about barn fire survival without discussing barn fire prevention.

Swerdlin says he’s learned from his work responding to barn fires with fire marshals that faulty wiring is to blame for most of these events. Incorrectly installed wires can fail to produce the electrical amperage load necessary to power the building safely.

“In the last fire we had, the barn had a refrigerator, a water cooler, and a hot water heater all plugged into the same outlet,” he says.

Add to that the box fans that many owners and barn managers hang at every stall, heating devices placed near hay storage areas, and bare wiring accessible to rodents and other vermin, and barn operators have a fire waiting to happen.

Swerdlin recommends replacing all old electrical systems in barns with new systems installed—and inspected annually—by a licensed professional electrician. He also recommends that all electric junction boxes be made of metal and that all wiring be encased in metal conduit to prevent rodents from chewing and subsequently shorting and sparking bare wires.

Ultimately, Swerdlin believes that unless owners and barn operators are taking these measures to prevent barn fires, horses will continue to be at risk of injury or death from fire sweeping through their barns.

“I think we’re going to see more barn fires because it’s getting hotter and people are putting in more fans to keep their horses cool and more devices to keep themselves comfortable,” Swerdlin says. “But people have to be pre-emptive—barn fire survival is heartbreaking and hard to treat and could be prevented.”

Beautiful 2 year old Clara is now available for adoption by an experienced horseman/women who wants to bring up a…
08/12/2022
Total views: 388