A necropsy revealed a pelvic fracture caused of death of the 1999 Horse of the Year. 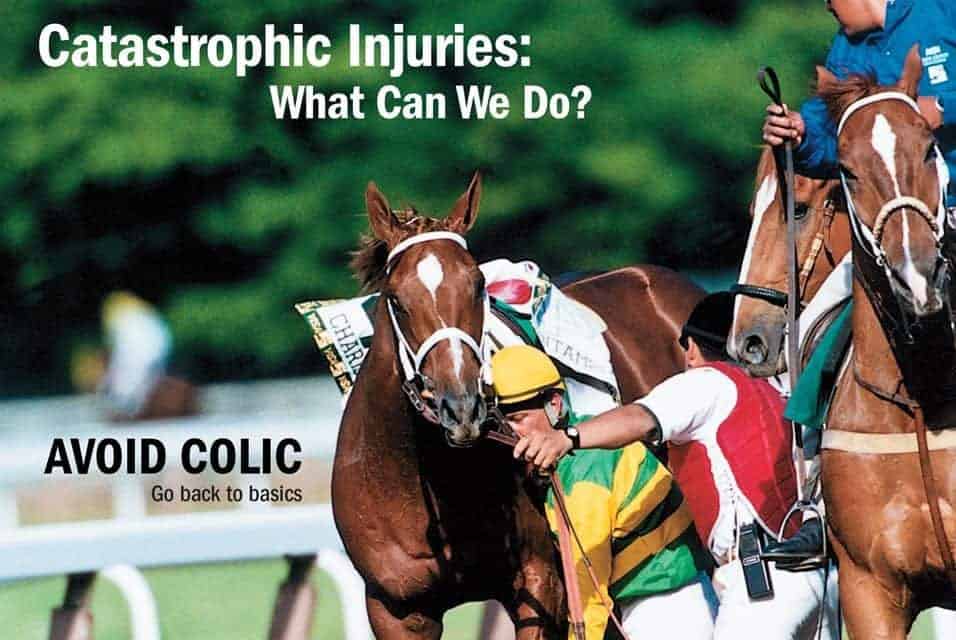 Jockey Chris Antley dismounted and held up Charismatic's leg after he sustained multiple fractures a few strides before the wire in the 1999 Belmont Stakes. The pair were featured on the July 2008 cover of The Horse.
ADVERTISEMENT

Dual classic winner and 1999 Horse of the Year Charismatic has died.

Charismatic was foaled March 13, 1996. He returned to the United States from the JBBA Shizunai Stallion Station in Japan on Dec. 4, 2016, and was pensioned at Old Friends, the Thoroughbred retirement center in Georgetown, Kentucky.

In a Feb. 21 update from Old Friends, farm veterinarians said a necropsy revealed that a pelvic fracture was behind the stallion’s death.

"A necropsy performed at the University of Kentucky Veterinary Diagnostic Laboratory revealed that Charismatic suffered a severe catastrophic fracture of his pelvis that resulted in fatal bleeding,” said Waldridge and Rhodes Bell, DVM, MS, Dipl. ACVS-LA, both of Park Equine Hospital, in Paris, Kentucky. “Pelvic fractures will in some cases also lacerate the large arteries of the pelvis and cause severe internal bleeding. Fatal pelvic fractures are uncommon and usually unforeseeable. It is not possible to know exactly how the injury happened or any factors that may have led to its occurrence."

On Feb. 20 Blowen said, "Right now, everyone is pretty much inconsolable. Last night, at 6:30, he was fine. He was a really tough horse and he deserved a much longer retirement. But none of us, unfortunately, has a magic wand. Everyone at Old Friends takes solace from the few great months that this great champion gave us."

Bred by Kentucky by Parrish Hill Farm and William Farish, and trained by Hall of Famer D. Wayne Lukas, Charismatic (Summer Squall—Bali Babe, by Drone) won, at long odds, the 1999 Kentucky Derby after vying in claiming races just a few months earlier. He went on to capture the Preakness Stakes and found himself an unlikely Triple Crown contender.

But in the Belmont Stakes the chestnut colt suffered multiple fractures in his left front leg just a few strides before the wire. It was only through the heroic efforts of jockey Chris Antley—who quickly dismounted and held up Charismatic’s injured left front leg off the ground—that the injuries were career ending and not life ending. Antly and Charismatic were featured on the July 2008 cover of The Horse: Your Guide To Equine Health Care (pictured above).

Charismatic earned that year’s Eclipse Award as champion 3-year-old colt, as well as Horse of the Year honors, and retired with five wins from 17 starts and earnings of $2,038,064. He entered stud at Lane’s End in 2000 and stood there for three seasons before relocating to Japan in 2002.

Beautiful 2 year old Clara is now available for adoption by an experienced horseman/women who wants to bring up a…
08/12/2022
Total views: 2350