Why do some hoof abscesses heal quickly while others linger? Why are some one-off occurrences while others keep coming back? We consulted two horse hoof experts to answer these questions and more. 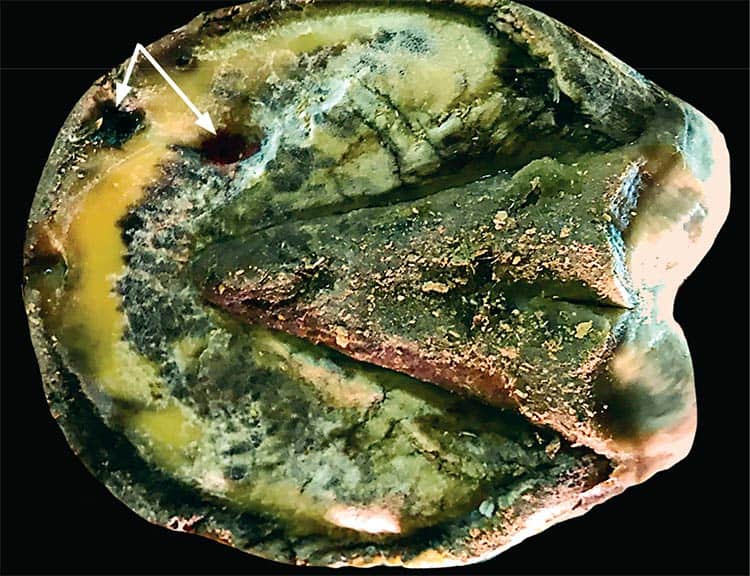 What you need to know about chronic hoof abscesses

When a horse is three-legged lame, there’s generally one phrase his owner hopes to hear from the veterinarian or farrier: “It’s an abscess.”

In most cases hoof abscesses resolve completely without the time, expense, complications, and varied prognoses that can accompany other causes of severe lameness in horses, such as fractures or soft-tissue injuries. But in some cases abscesses can become just as frustrating and costly as their more serious ­counterparts.

Why do some abscesses heal quickly while others linger? Why are some one-off occurrences while others keep coming back? And why do most resolve without complications, whereas a pesky few turn into potentially life-threatening issues?

Before we delve into chronic abscesses, it’s important to understand how a “normal” abscess works. Think of a hoof abscess as a zit in your horse’s foot. It’s a little pocket of infection (and, once the body responds, white blood cells and other inflammatory mediators) that can be incredibly painful when it’s trapped and applying pressure within the rigid hoof capsule.

“Abscesses usually present as acute, non-weight-bearing, or severe lameness,” Lesser says. “If you don’t realize an abscess could be on the table, a lot of owners worry their horse has broken a leg, but the vast majority are abscesses.”

Burns says affected horses generally have an obvious digital pulse (bounding in the artery along the side and back of the pastern and fetlock) and show resentment when you apply hoof testers. Once the abscess drains, much like a pimple, pain and lameness typically resolve quickly.

Because most owners see their farriers every four to eight weeks, Lesser says, many call them when they suspect an abscess. He says he has no problem with experienced farriers treating mild abscesses but emphasizes the importance of involving a veterinarian if the abscess is too deep within the hoof for the farrier to access and treat comfortably, if the farrier can’t find the abscess, or if there’s minimal to no improvement within a few days. Burns adds, “It is a gray area for a lot of people, but it is my opinion that the first call should be to the veterinarian for a suspected abscess just like any and all lameness issues. Farriers are typically very good at localizing and draining hoof abscesses; however, veterinarians should be, as well. Veterinarians have the ability to provide analgesia/pain relief, antibiotics as needed, and ensure the horse is up to date on tetanus prophylaxis.”

When the vet or farrier arrives to check on the potential abscess, he or she will typically try to locate and open it to relieve the pressure.

“With most abscesses, as soon as you get them open the horse will walk better,” Lesser says. “By the next day, they’ll ­probably be improved by 80% or more.”

In some cases veterinarians recommend taking radiographs (X rays) of the hoof to ensure another more serious issue isn’t already at play. While the horse with an open, draining abscess might be walking better, there’s still work to be done to treat the infection that caused the abscess.

“I like to soak them in Betadine (­povidone-iodine) and Epsom salts or CleanTrax (a deeply penetrating hoof cleanser) and then wrap (the affected area) with wet Animalintex poultice pads,” says Lesser. “I usually have owners do that every day until the drainage has stopped, then I have them either switch to Betadine on some cotton or a dry poultice pad to make sure there’s no more drainage.”

Once the lameness is resolved and the abscess void is dry, drainage-free, and beginning to epithelialize (i.e., new hoof horn starts replacing the granulation tissue that forms during healing), Burns says, “farriers will often apply a shoe and pad with an antiseptic packing to keep the wound/solar surface of the hoof free of dirt and debris for the duration of a normal shoeing cycle—four to six weeks.”

He adds that it could take two to three shoeing cycles for the solar surface to heal completely or be replaced by new growth, and keeping a pad on the hoof until this occurs can help healing progress properly.

“Depending on the location of the abscess, it can sometimes be covered with just a shoe,” adds Lesser. “The goal is to prevent debris from being packed in the hole and causing the abscess to recur.”

Significant improvements in soundness should be evident a few days after the abscess drains and treatment begins, enough that the horse can to return to work.

While complications can start developing sooner, Lesser says he uses three days as a rule of thumb. So, what can go wrong?

Some abscesses—especially deep ones or those that travel up toward the coronary band rather than down toward the sole—can simply take a while to heal. They can also recur if dirt or other debris gets trapped in the hole or drainage tract. These cases, Lesser says, “are mostly benign, but they’re ­frustrating.”

But, Burns notes, “chronic abscesses may linger in (untreated) cases of septic osteitis of the distal phalanx (coffin bone), distal phalanx sequestrums, keratomas, foreign bodies, etc. These are prime examples of why the veterinarian should be contacted in the event of a suspected abscess.”

The most common complications include:

Septic pedal osteitis—an infection in the coffin bone—can develop in conjunction with a recurrent or nonresolving abscess. Veterinarians can typically diagnose it based on clinical signs (e.g., continued drainage, lameness persisting despite drainage, abscess recurrence) and radiographs to look for bony changes. Lesser says as long as the veterinarian gets the infection fully under control, it typically doesn’t recur following healing.

“Most mild and moderate cases are treated with antibiotics,” he says, whether oral or introduced via regional limb perfusion. “We also use a lot of larval therapy for those. So, we’ll put maggots in there, they’ll last about a week, and they’ll only eat the dead and infected tissue. It’s a lot more precise than me going in there and cleaning out everything.”

If treatment is successful, horses with septic pedal osteitis start becoming sound in three to four days and can return to their regular routines in a week or two, Lesser says.

Severe pedal osteitis or poor blood supply can cause some horses to develop coffin bone sequestrums, which occur when a piece of bone dies and subsequently separates from healthy bone. Again, as Burns noted, these can keep clinical signs of abscesses from resolving. Veterinarians use imaging such as radiographs to diagnose sequestrums. Affected horses need surgery to remove the dead tissue and allow the coffin bone and surrounding tissues to begin healing, followed by antibiotics to ward off further infection.

“A lot of those horses are extremely sore for about two weeks because we have to go in there and scrape on the bone mechanically, unfortunately,” Lesser says.

Keratomas are slow-growing tumors of the hoof wall structures that can cause bone necrosis (death) and resulting abscesses. Veterinarians diagnose these uncommon growths based on a combination of clinical signs, radiographs, and sometimes MRI.

“The hoof wall takes anywhere from a few months to a year to fully grow out after keratoma surgery, depending on the type, size, and surrounding infection,” Lesser says.

Another concern is a foreign body—anything from a piece of stick to a metal fragment, potentially from a hoof puncture wound that might have prompted the abscess to form in the first place—embedded within the foot. Surgery to remove the problematic fragment is the only way affected horses recover.

Finally, a worry in horses with any kind of non-weight-bearing lameness is supporting-limb laminitis, Lesser says. While not a common complication of abscesses, it’s important to keep it in mind—especially in horses with a history of laminitis—and be prepared to implement preventive measures (i.e., standing the opposite foot in an ice water slurry), if necessary.

Regardless of the diagnosis and prescribed treatment, it’s essential to work with your veterinarian and farrier to be sure the horse is healing properly. In some cases your veterinarian will perform further diagnostics if the abscess isn’t healing well to ensure another issue or remnants of the initial problem within the hoof aren’t to blame.

While owners can try to keep abscesses at bay, you won’t find any foolproof prevention methods, our sources say. Some horses just seem to get more abscesses than others.

“Any horse with chronic/recurring abscesses should be examined for other disease pathologies,” Burns says.

For example, says Lesser, “Laminitic horses have compromised vascular (blood flow) supplies and stretching of the white line, so there’s more opportunity for the bacteria to get in there. They might experience some avascular necrosis, and that can cause abscesses. We do see quite a few abscesses with the chronic laminitis horses.”

“Providing clean and dry environments free of foreign objects is the primary thing owners should do to prevent abscesses,” Burns says. “Beyond that, shoes or shoes and pads are often used as mechanical barriers to prevent or limit dirt, debris, and microbes from penetrating the hoof capsule.”

Some chronic or recurring abscesses are just that: The abscess that seems to never end. But when resolution with normal treatment approaches proves elusive, another, more serious issue could be at play.

The best advice our sources have for owners managing horses with chronic or recurrent abscesses? Get your vet involved, and don’t delay on diagnosing potential complications.

“If you’re concerned, take an X ray,” Lesser says. “In the grand scheme of things, they’re not terribly expensive. But if we have recurrent abscesses and we don’t treat and get them under control, it can go to an infected coffin bone and then to a sequestrum. The cost can be astronomically different.”