Do Horses Know Their Names? Probably, But It’s Complicated

If a horse responds when a handler says, “Ginger, come here,” is it because Ginger has associated the word with a treat, or is it because she thinks, “I am Ginger”? 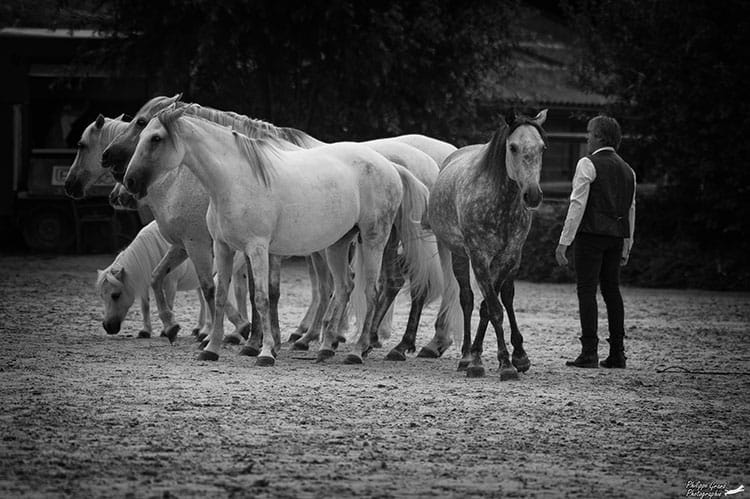 Performer and trainer Jean-François Pignon, in the Camargue region of southern France, works with sometimes dozens of free-moving horses in Olympic-size arenas before tens of thousands of spectators. Set to epic music and dazzling theatrical lighting, his horses move one by one, two by two, or in larger groups, in response to his seemingly invisible cues. In some scenes, one or two—or three or four—horses from the group gallop toward him. In others, only the black ones lie down in circles around him. And in one of his most famous acts, two horses gallop beneath him as he stands with one foot on each, with the other horses color-aligned on either side of them in a circular motion of perfect unison.

Surely, there’s no better proof that horses know their names, right? How else could they respond so clearly, and so individually, to Pignon’s cues?

But that’s not what’s happening. Pignon’s horses don’t learn their names—not because they can’t, he tells The Horse. It’s just that he’s found an even better way to connect with equids.

“Of course horses can learn to recognize their names,” Pignon said. “And I used to train them that way, years ago. But in the end, that’s not how they communicate with each other. So why should I?”

A Name: Just a Cue Word Like Any Other?

In Pignon’s experience, horses can learn to recognize their names. But it doesn’t mean they do so automatically, he said.

Alice Ruet, PhD, welfare science engineer at the French Horse and Equitation Institute (IFCE), in Saumur, France, agrees. Horses—like many other animals—can learn to react to verbal cues: “Come here,” “back up,” “stay still,” “lift your foot,” “right,” “left,” etc. Although no scientific studies have confirmed horses also learn to recognize the words that form their individual names, it makes sense many of them would, she said.

Still, what does “knowing their names” mean? If a horse steps forward when a handler says, “Ginger, come here,” is it only because Ginger has learned to associate her response to that name-cue with a reward—like a carrot or a good scratch?

Or is it because she thinks, “I am Ginger”?

For Paolo Baragli, DVM, PhD, an equine behavior specialist at the University of Pisa, in Italy, horses’ recognition of their names might go beyond basic operant conditioning. “Such associations are very complex,” he said, “so I think there might be more advanced? To avoid repeating “complex” cognitive skills behind this.”

For example, dogs might recognize their names as part of a “pack” experience, Baragli said. We don’t know, however, if that’s what horses are doing. “Dogs have a completely different sociality with humans, and humans can really be members of their social group,” he said.

At a deeper philosophical level, the question of whether horses know their names likely begs an even more basic question of individuality, said Baragli. In other words, do horses recognize themselves as individuals, worthy of individual identity tags? Research suggests they might. They match individual humans to their voices; they recognize photos of the humans who used to take care of them; they distinguish horses from other animals in photos; they remember each other after long separations; and they react differently to the voices of familiar versus unfamiliar horses.

Pignon doesn’t question that horses acknowledge their individualities. “Each horse has his or her unique personality and place in the group,” he said. “I even have a couple of mares who always have to make sure that their younger sisters are right by their side, at all times.” While those mares might not give “names,” in their brains, to their sisters, Pignon believes they have ways of identifying each other as unique and special.

I Am Me: A Name as a Symbol of Self

Even if horses recognize others as unique individuals, that doesn’t mean they recognize themselves as unique beings, said Baragli. The concept of “self” is complex and has often been considered a quality reserved for primates—more specifically, humans. Without the notion of self, it’s unlikely an animal would associate a name with “me.”

That said, horses might have a notion of “self,” Baragli said. His team recently used tinted and transparent gel to mark an X on horses’ cheeks and then let them walk around an arena with a large standing mirror. When the horses saw themselves in the mirror and saw the colored X on their faces, they tried to rub the mark off with their legs.

“They’re either trying to explore the mark on their face or trying to get it off,” he said, adding that this suggests they clearly recognized the horse in the mirror as themselves. “It’s hard to imagine there’s any other reason for this behavior.”

Baragli said this might hint at horses having a sense of unique self. Having an emotional reaction to hearing their names might give more weight to that hypothesis, said Baragli. But it also might mean the horse simply associates the name with a positive experience.

“At least in some cases, horses could be happy to see a specific person and hear that person calling the horse’s name, if it’s a person who represents a source of pleasure, which isn’t just limited to food,” Baragli said.

For Pignon, horses’ names are nothing more than a human invention with a practical purpose. We use them when we tell other people at the barn which horse needs to be worked, which one needs to see the farrier, which one is going to the competition, and so on. We use them on administrative paperwork and to commercialize them or distinguish them online. “Names are convenient,” he said. “And they’re nicer than numbers.”

Even if horses recognize their names, that doesn’t mean they see them as an identity label, he adds. That’s because they don’t think or communicate in that way.

“Horses have a very subtle form of communication with each other,” Pignon said. “They understand human language when we teach it to them, but that’s not their mother tongue. People have a sophisticated language but no subtlety. Horses address each other with subtlety. So now that’s what I do too, because it’s always nicer to have someone speak to you in your native language.”

While we lack horses’ ear movements and facial expressions, we can still communicate with them in silence the way they usually do with each other, he said. That includes addressing them one by one.

“I never call them by their names anymore when I’m working with them,” said Pignon. “Now, it’s all in the eyes. A horse 50 meters (about 55 yards) away can tell whether you’re looking at him or the horse right next to him. They know when they’re the one I’m communicating with because I’m ‘calling’ them, with my regard.”