Why Might a Young Horse Grind His Teeth Under Stress?

An equine behavior researcher addresses potential reasons a 3-year-old is grinding his teeth during training. Some horses might grind their teeth when they are concentrating on a newly learned task or one that seems difficult to them.
Photo Credit: iStock
ADVERTISEMENT

Q: My 3-year-old grits his teeth and grinds his jaw whenever he is presented with a new task and he’s unsure or becoming stressed. His sire and three siblings did the same thing. What could be the cause of his teeth grinding? —Sherry Rosser Carroll, via Facebook

A: I know many people believe that if a horse is gritting/grinding his teeth, he’s in pain or in distress. For example, colicking horses will often grind their teeth; horses coming out of anesthesia post-surgery might sometimes grind their teeth; and horses with gastric ulcers might teeth grind.

However, I’ve known several horses that would grind their teeth when they were concentrating on a task that was newly learned or seemed difficult for them. For example, one dressage horse I knew would teeth grind when working on his flying lead changes, but the rest of his body language didn’t seem to indicate distress. As he became more skilled at that maneuver, the teeth grinding became less frequent.

Certainly it is always good to check for a medical reason behind teeth grinding (e.g., dental issues, gastric ulcers). But if the horse has been given a clean bill of health, I would just be careful not to overface this horse in his training. Ideally, it would be best to work on training this horse when he has not quite reached the arousal state of teeth grinding. Two reference articles you might find helpful include: 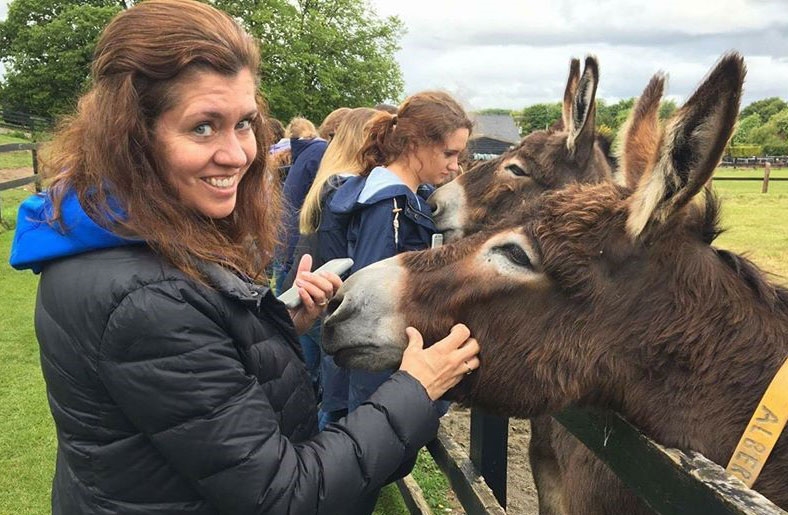 Camie Heleski, PhD, MS, is an instructor and adviser in the University of Kentucky equine science and management program. Previously, she worked at Michigan State University, where she was the two-year horse management program coordinator for 25 years. Her applied research interests include equine behavior and welfare, horse-human interactions, and working equids in the world’s developing regions. She’s currently president of the International Society for Equitation Science and has served as scientific chair for the National Farm Animal Care Council’s Canadian equine welfare code committee. Her equine research and outreach efforts have taken her to Brazil, Mexico, Honduras, Egypt, and Mali. She enjoys dressage with her Arabian gelding, MSU Ducati._x000D_ _x000D_