Join a librarian and equestrian as she saddles up for national “Get Caught Reading” month and reviews some of her favorite horsey fiction. Join a librarian and equestrian as she saddles up for national “Read a Book” month and reviews some of her favorite horsey fiction.
Photo: iStock
ADVERTISEMENT

Hush Money was a find. Literally. I found it one day while restocking display shelves at the library where I work. It&rsquo;s Chuck Greaves&rsquo; first novel and any press for it clearly flew under my radar as I recognized neither the author nor the title. From the spine, I could tell it was a newer mystery and when I pulled it out I found a cover featuring a briefcase overflowing with money embossed with a show jumper. A show jumper! That caught my attention. As a big fan of both mysteries and show jumpers I made a fast decision. This book was not going on any display shelf. Instead it went straight to my desk so I could check it out.

Now, if you&rsquo;re a fan of horses and mysteries, you&rsquo;re probably making the same mental leap I did. I was expecting a very Dick Francis-like mystery set in the show jumping rather than racing world. But Greaves&rsquo; book is something quite different. It&rsquo;s more of a noir thriller along the lines of The Maltese Falcon complete with the fast talking private investigator and a full cast of femmes fatale. But this is a modern book set in sunny Pasadena, California, and it&rsquo;s not as dark as a classic Raymond Chandler or Dashiell Hammett. That said, Greaves does render the style well, especially its trademark witty dialogue and elements of danger and suspense. 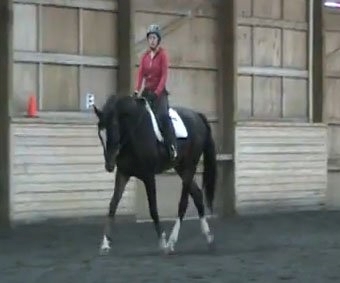 Jenny Pedersen, MLIS, is a librarian in Redmond, Oregon. She grew up riding in Pony club, showing hunters, and eventing. When not working or reading, she enjoys trail riding with friends and working on her dressage skills.