The Asian Longhorned Tick: Challenges From an Invasive Arachnid

As of August 2018, the invasive Asian longhorned tick has been found in at least one location in Arkansas, Connecticut, Maryland, New Jersey, New York, North Carolina, Pennsylvania, Virginia, and West Virginia. 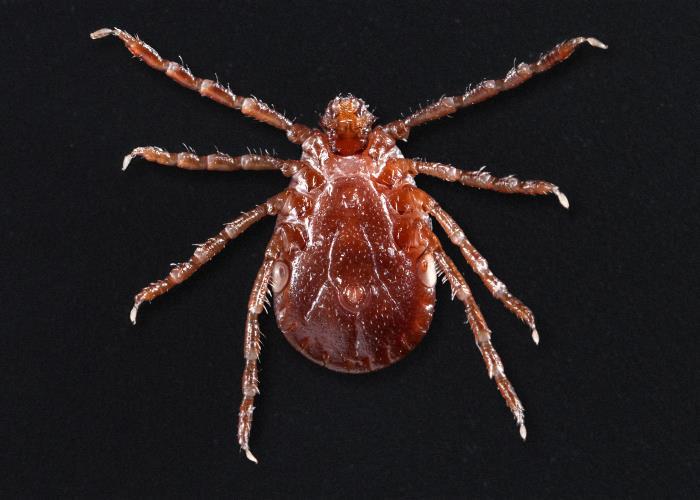 The Asian longhorned tick (Haemaphysalis longicornis) has a small, reddish-brown body with no distinctive markings to facilitate quick recognition. In addition, unfed adults are smaller (3 to 4 millimeters long) than the familiar commonly encountered hard ticks. The initial confirmed identification of Asian longhorned ticks in the United States was based on specimens collected from a heavily-infested sheep in New Jersey in 2017. This was thought to be the first detection of a new tick species in the U.S. in 50 years.

However, subsequent investigation revealed that specimens removed from a dog in New Jersey in 2013, which were initially identified as the native rabbit tick (Haemaphysalis leporispalustris), were actually Asian longhorned ticks. Consequently, the species has been present for several years and has spread. As of August 2018, this invasive tick has been found in at least one location in Arkansas, Connecticut, Maryland, New Jersey, New York, North Carolina, Pennsylvania, Virginia, and West Virginia (Figure 1, below). Reported hosts have included cattle, a dog, a horse, an opossum, and white-tailed deer.

Native to China, Korea, and Japan, the Asian longhorned tick became established in Australia and New Zealand, where it feeds on a variety of wild and domestic animals and humans. This species does best in moist, warm environments. However, it can withstand temperatures from its developmental threshold of about 12 degrees C (about 53 degrees F) to a lethal high temperature of 40 degrees C (104 degrees F). Adults and particularly larval stages of the species appear to have a relatively low tolerance of dehydration, which could play an important role in its ultimate distribution in the U.S.

The Asian longhorned tick is a three-host tick with a life cycle that takes about a year. While males and females occur in approximately equal numbers over its native habitat, very few males have been found in the U.S. Apparently, parthenogenesis (female reproduction without the need of fertilization by a male) is a significant feature of its biology in the United States. Females can deposit about 2,000 eggs, all females, so local populations can grow rapidly following establishment. This can result in significant blood loss and stress to infested hosts. While the initial introduction(s) of this tick is unknown, genetic mapping has identified three mitochondrial DNA lineages. This points to at least three distinct female lineages. Parthenogenesis would allow relatively rapid selection for biotypes in response to environmental factors in its new habitat.

Collections of Asian longhorned ticks from sheep in China indicate the ears and periocular areas are preferred attachment sites. Specimens collected and tested in the U.S. have not been shown to carry any diseases, but the Asian longhorned tick is a competent disease vector in Asia, contributing to theileriosis and babesiosis in cattle in Australia and New Zealand and anaplasmosis in Korea. Severe fever with thrombocytopenia syndrome (SFTS) is an emerging hemorrhagic fever in East Asia caused by SFTS virus (SFTSV), a newly discovered phlebovirus. The H. longicornis tick has been suspected to be the vector of SFTSV.

Time will tell the story of its vector potential in North America. Preserved suspected Asian longhorned tick specimens should be sent to the National Veterinary Services Laboratories, in Ames, Iowa, for identification.