Keeping a PPID Horse Cool During the Summer

Horses with Cushing’s have a harder time regulating their body temperature and often sport longer coats. Dr. Jeanette Mero has recommendations for keeping those horses comfortable. 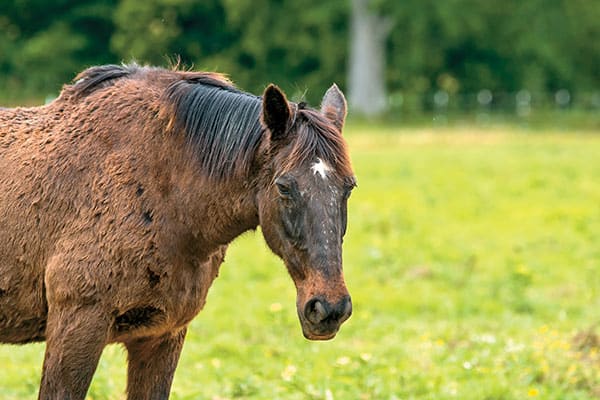 Horses with Cushing’s have a harder time regulating their body temperature and often sport longer coats. Dr. Jeanette Mero has recommendations for keeping those horses comfortable.

This podcast is an excerpt of our Ask TheHorse Live Q&A, “Hot Summer Days and Your Horse.” Listen to the full recording here. Jeanette “Jay” Mero, DVM, graduated from Cornell University’s College of Veterinary Medicine in 1994 and then completed a large animal medicine and surgery internship at the Ontario Veterinary College at the University of Guelph. She spent 10 years in large animal practice in New York’s Finger Lakes region. In 2005, she and her family moved to Mariposa, California, where she established Mariposa Equine Services, a solo ambulatory equine practice. She’s been happily providing equine veterinary care in the foothills outside Yosemite National Park since 2006. One of the reasons Jay and her family moved to California was to become more involved in her greatest passion in life—besides her family and her work—the sport of endurance riding. Since arriving on the West Coast Jay and her family have logged thousands of endurance miles in competition. Mero has served as chair of the American Endurance Ride Conference’s Veterinary Committee since 2009.