Why Abrupt Diet Changes are Bad for Your Horse

Researchers say progressive changes in diets lead to healthier microbiomes and fewer digestive issues, such as diarrhea and colic. 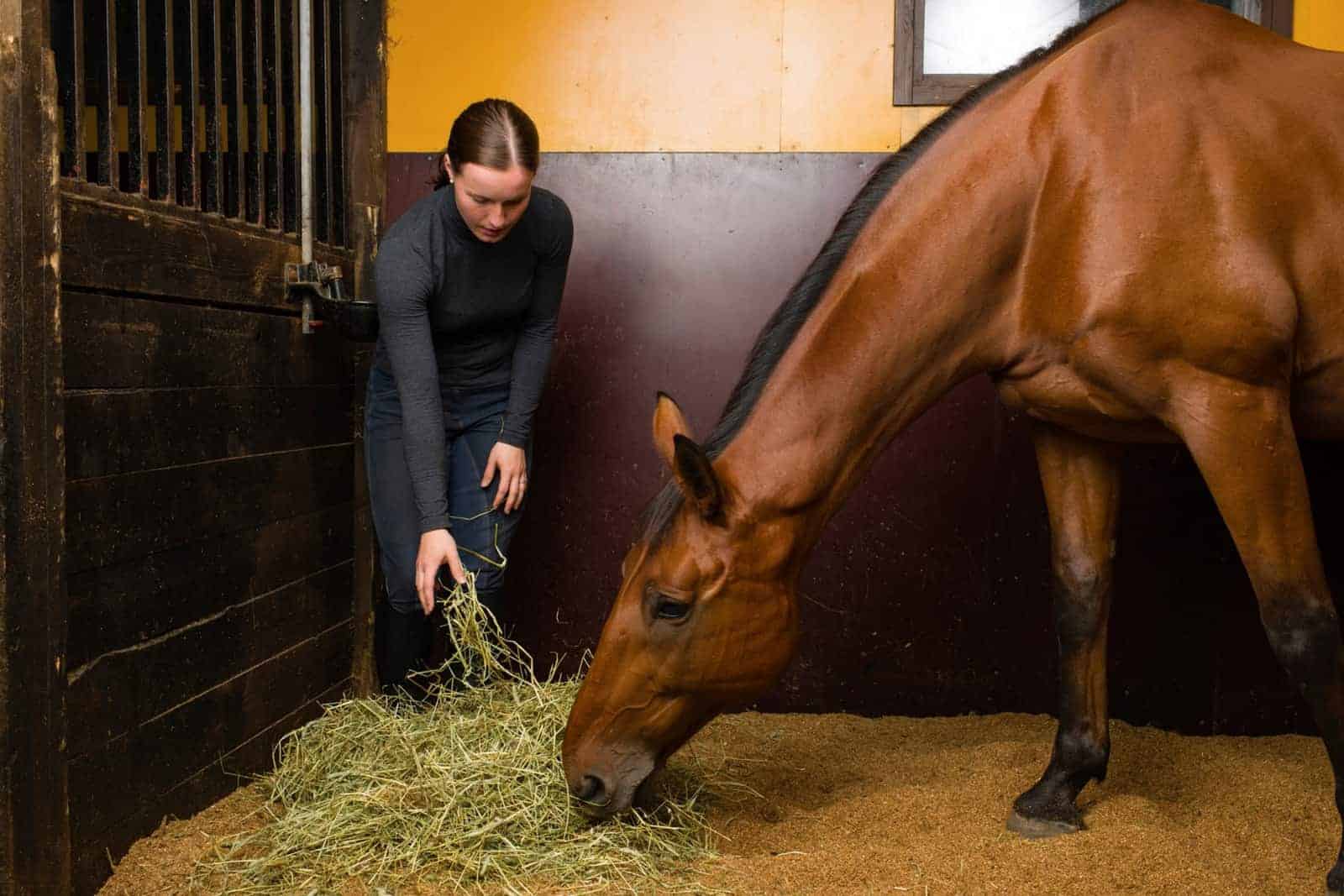 A rapid switch between grass pasture and a hay diet can upset the gut microbiome, which might explain why some horses experience colic or laminitis when changing feeding regimes, according to Scottish researchers.

While scientists still don’t fully understand the ideal health status of horses’ gut microbiomes—the ecosystem of microscopic organisms such as bacteria and viruses inhabiting the digestive system—they do recognize that changes in the microbiome seem to reflect changes in digestive health, said Anna Garber, PhD, of the School of Veterinary Medicine at the University of Glasgow, in the U.K.

The ponies first spent a month living full-time on grass pasture. The researchers then abruptly moved the ponies into individual box stalls for 14 days, where they received about 4-5 kilograms (9-11 pounds) of hay per day—rations designed to replicate real-life scenarios of riding horses. At the conclusion of that two-week period, the researchers instituted another abrupt change, moving the ponies back to group-living in a grass pasture.

The researchers found that the ponies’ microbiomes were relatively similar regardless of whether they were consuming grass pasture or a hay diet, she said. However, her team observed notable differences in the ponies’ microbiomes in the first three days after the abrupt change from hay to grass and vice-versa. Further, during those first three days the ratios of certain kinds of bacteria in the microbiome shifted, indicating the gut’s efforts to adapt to change. Likely, it was responding not only to the dietary change but also the environmental change, including differences in location and social situation, said Garber.

“It’s important to remember that change from grass to hay and from hay to grass is not only a change to the diet but also a change to the way the horses are managed, which includes temperature and humidity, light regime, exercise, social interaction, etc.,” she said.

Specifically, the researchers noted a flip in the Bacteroidetes-to-Firmicutes ratio right after changing regimes, Garber explained. When the diet was stable—whether grass or hay—Bacteroidetes dominated Firmicutes. But in the first few days of abrupt change, Firmicutes became the dominant bacteria. Both human and equine studies indicate that obesity is associated with a higher ratio of Firmicutes over Bacteroidetes. In horses, science has also shown that healthy horses have more Firmicutes, whereas those with colitis have more Bacteroidetes. So while the ratio’s effects aren’t clear, it’s worth noting that the balance shifts abruptly when the horse’s diet changes abruptly, indicating the gut is working to adjust to the change, Garber said.

“It is well-known that when microbiota in the gut is balanced (what is call symbiosis), horses can efficiently digest their feed, and the risk of the digestive upset is lower,” she explained. “Abrupt changes to the diet, on the other hand, may disrupt this balance and lead to dysbiosis.”

“Reductions of pH in the gut may lead to acidosis, diarrhea, and colic,” Garber said. “It’s also not beneficial for the fiber-degrading bacteria, which may die and release toxins and in turn potentially lead to laminitis.”

The exact effects of these changes aren’t clear, but evidence suggests they could be associated with metabolic upset in some horses, leading to colic and/or laminitis.

“Horses often experience sudden changes from hay to grass when we turn them out in spring when the grass starts to grow better and from hay to grass when we bring them back in to their stables in autumn when grass on pastures becomes scarce,” said Garber. “So these changes are common to many horses and are likely to cause digestive upsets and increase the risk for health problems like acidosis, colic, and laminitis.”

The research team recognized distinct individual differences from pony to pony, said Garber. Although none of the study ponies experienced clinical signs of health problems, they all had varying degrees of microbiome changes.

While this might explain why some horses have obvious reactions—such as colic—to abrupt dietary changes, it also suggests these changes affect most horses whether we realize it or not.

“Even when horses do not show clinical signs of microbial upset, the changes may still happen subclinically without us noticing it,” Garber said. “Long-term, these changes may also lead to negative health effects.”