This important protective system is extremely complex. Here’s a rundown of how your horse’s immune responses function. The immune system is critical to maintaining life in any species. It protects when foreign invaders, such as viruses, parasites, or bacteria, breach your physical barriers—such as skin and mucous membranes—and enter the body. Naturally, this important system is extremely complex.

Amanda Adams, PhD, equine immunologist at the University of Kentucky’s Gluck Equine Research Center, presented an overview of the immune system at the Role of Immunology in Equine Health Symposium, held Nov. 21 in Lexington. She started with some of the basics: What is immunity?

“Immunity is a state of having sufficient biological defenses to avoid infection, disease, or other unwanted biological invasion,” Adams began.

When a pathogen, or disease-causing organism, breaks through the body’s natural protective barriers, the innate immune system is activated as the first line of defense. This is the body’s built-in immunity to resist infection, said Adams. The innate immune response is present from birth, not specific for any particular microbial substance (it doesn’t matter if the invader is a virus, parasite, or bacteria, the immune system will kick in), and has no memory.

When pathogens break through the epithelial barrier (skin), epithelial cells release small proteins called chemokines and cytokines, which are “critical in creating a trail or signal to activate the innate immune response,” said Adams. They are directly responsible for immune cell-to-cell communication.

When cytokines are produced, they also trigger the inflammatory process characterized by heat, swelling, redness, and pain. This acute inflammation is actually good, said Adams, because the resulting vasodilation of the endothelial cells attracts and allows for more phagocytes at the site of infection.

This entire innate immune response can happen in seconds and continue for minutes to days, she said.

“Not only are phagocytes important for killing pathogens, but they also process the pathogens into antigenic pieces and put the pieces on their cell surface receptors, which allows these cells to show the antigen to the adaptive immune system for activation,” said Adams. 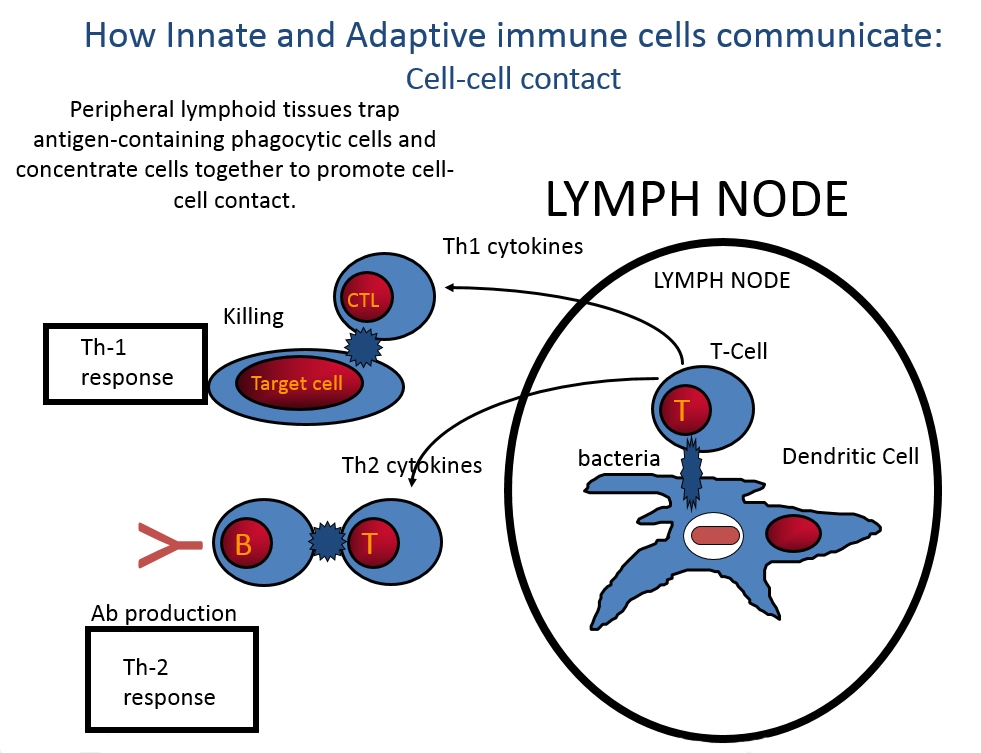 Unlike the innate response, the adaptive immune response is specific to a particular pathogen. As mentioned, the link between innate and adaptive immunity are the more specialized phagocytes: the dendritic cells and macrophages.

“Once dendritic cells have engulfed the pathogen at the site of infection, they leave the tissue and enter the lymphatic system to travel to the lymph nodes to present the pathogen as an antigen to the lymphocytes (white blood cells of T-cells and B-cells),” for recognition, Adams explained. The lymphatic system essentially serves as a highway for immune cells to travel around the body, she added.

Adaptive immunity is learned, is pathogen-specific, is enhanced by second exposure, and has memory. It relies on the innate immune system to communicate information about pathogens in the body, particularly whether a bacteria or virus has invaded.

The immune system has to keep up with constantly changing microbes. “This is why the innate response is critical as an immediate defense mechanism,” Adams said. “Once the innate immune system becomes activated, it sends the correct signals to the adaptive immune system for activation and to let the system know what kind of pathogen the body has been invaded by. Once this system is turned on, the infection can be eliminated if there are sufficient levels of activation. More importantly, activation of the adaptive immune response allows for generation of immunological memory to allow for a quicker immune response upon second exposure to that pathogen.”

The equine immune system is far more complex than the brief description provided here, and a number of factors (e.g., nutrition, age, stress, vaccination history, etc.) can impact how well it functions. “Thus, optimal care of the immune system is critical for a properly functioning immune response that allows for sufficient biological defenses to ward off infection and protect the body to sustain life,” Adams concluded.