Understanding the Differences between EMS and PPID As our understanding of the equine endocrine system advances, so does the demand for research on diagnosis, discovery, and efficacy of treatment for the most common endocrine disorders equine practitioners and owners deal with: equine metabolic syndrome (EMS) and pituitary pars intermedia dysfunction (PPID, or equine Cushing’s disease).

Horse owner and practitioner education about these diseases, however, is lagging behind. There continues to be a great amount of confusion in the horse world surrounding these two endocrine disorders. It is critical to understand each of them in order to properly treat and manage affected horses. In this article we will discuss the differences between EMS and PPID as well as relevant studies under way at the University of Kentucky Gluck Equine Research Center.

Cushing’s disease is the most common equine endocrine disorder. The veterinary community prefers to call it by the acronym PPID because it provides a more accurate name for the disorder, as the cells of pars intermedia of the pituitary gland are dysfunctional. Typically, this disorder occurs in older horses, with the average age of onset being 19 years and the frequency of diagnosis generally increasing with age. Although veterinarians rarely see PPID in horses younger than 10, it has been reported anecdotally. To understand the condition, you first have to understand how the endocrine system works.

The endocrine system is comprised of glands that communicate with other glands, which then communicate with organs–all through hormone signals sent through the bloodstream. In PPID-affected horses, the system of pituitary-adrenal gland communication functions abnormally. These horses have a loss of dompaminergic inhibition which leads to an overgrowth (hyperplasia) of cells in the pars intermedia region of pituitary gland. This lack of communication in the pituitary-adrenal gland axis contributes to the production of abnormally high levels of many pituitary hormones, including adrenocorticotropic hormone (ACTH), melanocyte stimulating hormone (alpha-MSH), and other products of a large precursor hormone called proopiomelanocortin, or POMC. Excess ACTH likely interferes with a horse’s ability to regulate cortisol synthesis by the adrenal glands. Although the exact pathophysiology remains to be determined, these processes lead to the long list of outward problems seen in affected animals. A horse diagnosed with PPID can exhibit some of these common clinical signs:

There are two categories of diagnostic tests available for determining if a horse has PPID. The first is dynamic testing involving either the overnight dexamethasone suppression test (DST) measuring cortisol, the thyrotropin-releasing hormone (TRH) stimulation test measuring ACTH, or the diurnal rhythm test measuring cortisol–all of which assess the endocrine glands’ responsiveness. The second category is single testing, which serves as more of a screening assessment involving measuring basal levels of hormones including ACTH, a-MSH, or cortisol. None of these tests, however, are 100% accurate for diagnosing PPID. In horses with more advanced PPID, the common sign of the long, curly hair coat is key in making the diagnosis. Other caveats include season’s effects on hormone production, which can create false positives; some hormone assays’ limited sensitivity; improper sample handling that can alter the results; and the fact that only a select few labs in the United States can provide the assays. Thus, many equine endocrine disease researchers’ primary focus is on developing improved diagnostic tests with increased sensitivity, repeatability, and availability.

For PPID horses, pergolide is considered the gold standard treatment. Pergolide is a dopamine agonist, acting to restore inhibition to the pars intermedia, thereby decreasing the production of hormones such as ACTH. Proper management of PPID horses includes body clipping when needed; monitoring for signs of infection; proactive monitoring of basal hormone levels such as ACTH to ensure appropriate pergolide treatment levels; ensuring proper nutrition based on the horse’s body condition; and screening and monitoring for insulin resistance to prevent laminitis.

An active area of research involving the Gluck Center’s herd of PPID horses is trying to further understand how the disease affects the immune system. One poorly understood negative effect of PPID is the associated long-term high levels of endocrine hormone concentrations. What effect do some of these “stress” hormones have on the immune system, likely a mechanism responsible for the in increased chronic infections of PPID-affected horses. Gluck researchers want to further understand how PPID affects immune responses and, in particular, immune responses to annual vaccinations. Perhaps these horses do not respond as well to vaccination compared to horses that do not suffer from PPID. Gluck scientists also want to further understand pergolide’s impact on these horses’ immune function. Another area of research is to improve understanding and use of PPID diagnostics.

Recently, a panel of equine researchers and experts in the field of endocrinology reached a consensus defining EMS by the following three main criteria: 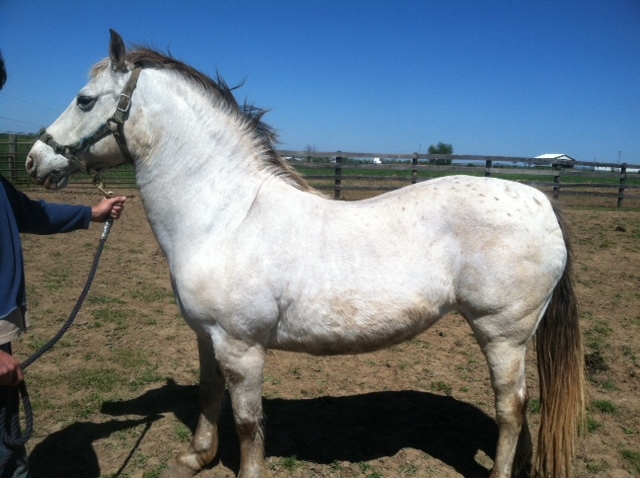 Biscuit, one of UK’s EMS horses

Insulin resistance, or decreased insulin sensitivity, is a failure of insulin to stimulate glucose uptake by metabolically active tissues (muscle, adipose, and liver) when nutrients are abundant after feeding. The end result is elevated basal insulin levels. Therefore, the goal when diagnosing EMS is to determine if the horse is insulin resistant. This is critical given that IR contributes to an increased risk of developing laminitis, a degenerative inflammatory condition of the hoof that often leads to euthanasia. To evaluate a horse for IR, the veterinarian generally measures the horse’s resting insulin concentration and performs an insulin-glucose sensitivity test. Two test options are the intravenous glucose tolerance test (IVGTT) and the combined glucose-insulin test (CGIT). Both require several blood samples to be collected over a relatively short period of time, which is not practical for the busy, ambulatory veterinarian. Thus, scientists recently developed an oral sugar test (now recommended over the above methods) that involves collecting a blood sample during the morning hours, followed by orally administering light karo syrup (15 cc per 100 kg/bw) and collecting another blood sample 60 to 90 minutes later. Blood samples are evaluated for insulin levels.

Dietary management and exercise (which aid in reducing the risk for developing laminitis) are the two gold standards of managing horses and ponies with EMS. Dietary adjustments, such as decreasing a horse’s caloric intake, can help limit the stimulus for insulin production. Feeding hay at 1.5-2.0% of body weight is considered a restricted diet for IR. Veterinarians and nutritionists recommend feeding grass hay or other feed sources that are low in water-soluble carbohydrates (WSC) or nonstructural carbohydrates (NSC). They also encourage forage analysis of your hay to accurately determine the WSC/NSC content. NSC content below 12% is suggested for IR horses and ponies, and soaking hay for 30 to 60 minutes can help remove these sugars.

Limiting pasture access using a grazing muzzle or by confining the horse to a drylot is especially important during the spring seasons. If only feeding hay, make sure to also feed a balancer pellet. If the horse requires more calories, choose fat sources instead of grains and feeds with high carbohydrate/sugar content. Veterinarians and nutritionists also encourage feeding higher fiber content in these horses’ daily diets.

Medical management of EMS involves the supervised use of Levothyroxine or Metformin to increase metabolism, which helps horses lose weight and, in turn, reduces basal insulin values.

An active area of research within the Gluck Center’s herd of EMS horses is the study of novel therapies that will modulate both the metabolic and inflammation aspect of EMS. Recently, researchers performed a study in EMS horses determining the effects of resveratrol, a natural polyphenol compound that scientists have identified as a key activator of important metabolic hormones, causing beneficial downstream signaling events that mimic protective mechanisms induced by caloric restriction. Overall, resveratrol therapy decreased inflammation and serum leptin and tryglerceride levels and improved insulin responses in EMS horses when compared to EMS horses receiving the control therapy. While this 45-day resveratrol treatment did not return horses to a normal metabolic state, it did improve their metabolic and inflammatory responses. Discovering novel therapies is an exciting area of research, as there is a critical need for safer and more effective means of treating both the insulin resistance and inflammatory component of EMS.

Occasionally, both disorders can occur together. PPID horses can also be IR, but EMS horses are less likely to be PPID. With this said, anecdotal evidence has suggested that EMS horses are more likely to develop PPID at an older age (more than 20); however, the research to support this is lacking.

With any PPID or EMS patient, regular health checkups are critical to long-term care. This includes basic blood work, dental care, and regular foot/hoof trimming. It is critical to work with your veterinarian to differentiate between PPID and EMS in your horse to ensure proper treatment and management.

Differences Between EMS and PPID

Amanda Adams, PhD, an Research Assistant Professor at the University of Kentucky Gluck Equine Research Center, provided this information. She can be contacted at amanda.adams@uky.edu or 859/218-1097.