Researchers evaluated the activity of three muscles when horses worked in different head and neck positions. The way we use our reins—intentionally or not—could be giving signals to horses that we weren’t meaning to give.
Photo: Photos.com
ADVERTISEMENT

Kathrin Kienapfel, MA, a doctoral student at Ruhr-University Bochum, in North Rhine-Westphalia, Germany, recently evaluated electromyography (EMG, a tool that allows researchers to read muscle activity through sensors attached to the skin) activity of three major head and neck muscles when horses performed three characteristic HNPs: free, gathered (competition frame with head high, neck flexed, and nose in front of the vertical), and hyperflexed (with the mouth pointing toward the chest, or behind the vertical). She presented her findings at the 9th Annual International Society for Equitation Science, held July 18-20 at the University of Delaware, in Newark.

In the study they used EMG to measure five healthy Warmbloods’ HNPs in both directions at the walk, trot, and canter, with and without a rider (positions without a rider were achieved using draw reins). Each horse performed, on average, 10 cycles (or 10 steps at each gait) in each position. The researchers compared HNPs between left and right directions, left and right 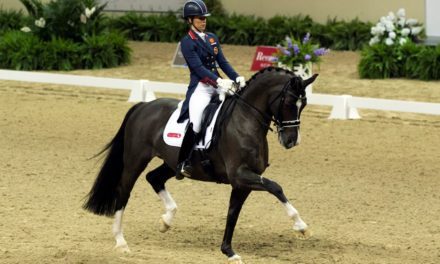 If you are interested in adopting this horse, please submit an ‘Adoption Inquiry’ via our website: Allaboutequine dot org. No…
07/01/2021
Total views: 1542