My Mustang Isn’t Who I Thought She Was

Have you ever used genetic testing to research your horse’s ancestry? Find out how a DNA test offered Alayne some surprise answers to questions about her BLM mustang’s ancestry. What a surprise!  My mustang isn’t who I thought she was.

Stellar is my mustang. I adopted her late last summer, or rather she adopted me.

I am a volunteer member of a Bureau of Land Management (BLM) District’s Resource Advisory Council, a committee that meets regularly to learn about issues and actions the BLM district is facing. As committee members, we do research and provide input.  Early last summer, as part of that committee, I toured a new BLM off-range holding facility for wild horses in Bruneau, Idaho. It’s a well thought-out, well-designed facility for holding horses too old for adoption or otherwise less likely to be adopted–nearly 3,000 of them. The intent is to hold them there until they can be sent to long-term holding facilities back East.The tour was quite interesting and as we were going along it was only natural for me to admire the horses, so many nice-looking ones with good conformation. That’s when I saw Stellar, in lucky Pen 13 which held all older mares. I was struck by her kind, calm eye and beautiful long mane all in dreadlocks. As I reached out to touch her, I realized she wasn’t frightened of me like most wild horses. I touched her face, tentatively at first, then her ears, neck, and shoulders. She stood next to the fence with her eyes half-closed, craving attention as I scratched her withers.

I left her side to continued with the tour but soon realized she was following me, begging for more attention and pushing other horses out of the way to stand as close to me as possible, quietly waiting for me to notice her again.

Eventually Stellar did come home with us, and I’ve been working with her as much as possible, doing my best to teach her to be a solid citizen-to halter, lead, be groomed, move body parts, stand tied, pick up her feet, be saddled, bridled, ground driven with long lines, trailer loaded, hosed off, be ponied (at the walk, trot, and even lope). She’s learned to stand to have her feet trimmed and we’ve even begun riding under saddle. She’s been calm, kind, and so appreciative of attention a along. For me it’s been a blast, an amazing journey I never expected to experience.

Now for the surprise-the cavalry has arrived!

For the most part, mustangs are thought to be descendants of horses brought to the North America by early Spanish explorers. Stellar looks to me like a Quarter Horse draft pony mix, but with her beautiful long mane and tail I figured she had some Spanish blood in there some place. I recently learned about equine genetic testing for horses where DNA testing is used to determine ancestry. I eagerly sent in my 30-50 mane hairs with follicles, then sat back awaiting my results. 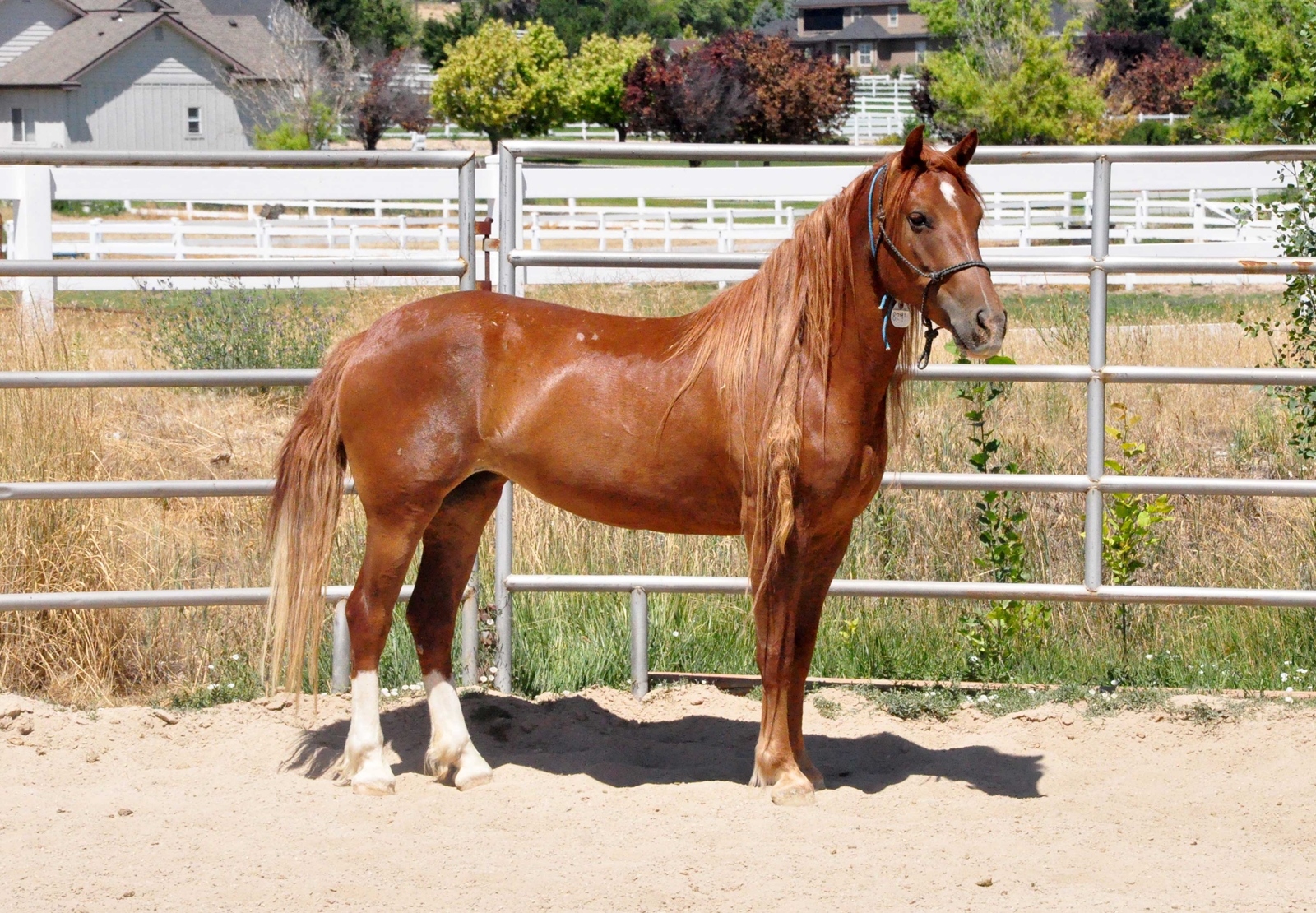 Stellar looks to me like a Quarter Horse draft pony mix, but with her beautiful long mane and tail I figured she had some Spanish blood in there some place. | Photo: Alayne Blickle

How amazing a thing it is to have a peek into my calm and kind mare’s ancestry!  Stellar’s genetic debut revealed something much different than I expected:

When I spoke with the researcher at the Texas A&M University laboratory where I submitted the test, he explained a few things to me. I wasn’t familiar with the Selle Franais and was quite curious about her Hackney and Holsteiner parts. He referred to Selle Franais as “French Thoroughbred,” and said they are the genetic backbone of a lot of working horse breeds, including many of today’s Quarter Horses. He also made it clear that all three of the breeds in Stellar’s genetic makeup were imported from Europe to the New World as workhorses (he said Hackneys were used as carthorses) and the U.S. Calvary relied heavily on all three breeds. Stellar grew up in Wyoming in the Adobe Town Horse Management Area – in the 1800s there were several military posts and forts nearby. I picture her great-great-great grandparents pulling heavy military wagons and helping to build forts or railroads.

So, based on Stellar’s DNA typing, my mustang actually carries bloodlines of hard-working relatives in her background – surprisingly not at all Spanish. I wonder if that means Stellar and I have a future in carthorse driving? Beautiful and very sound mare with trail, dressage and jumping experience. Looking for a home because she doesn’t like the…
01/09/2023
Total views: 759