There is no specific formula for estimating foals’ mature size that works in all instances. 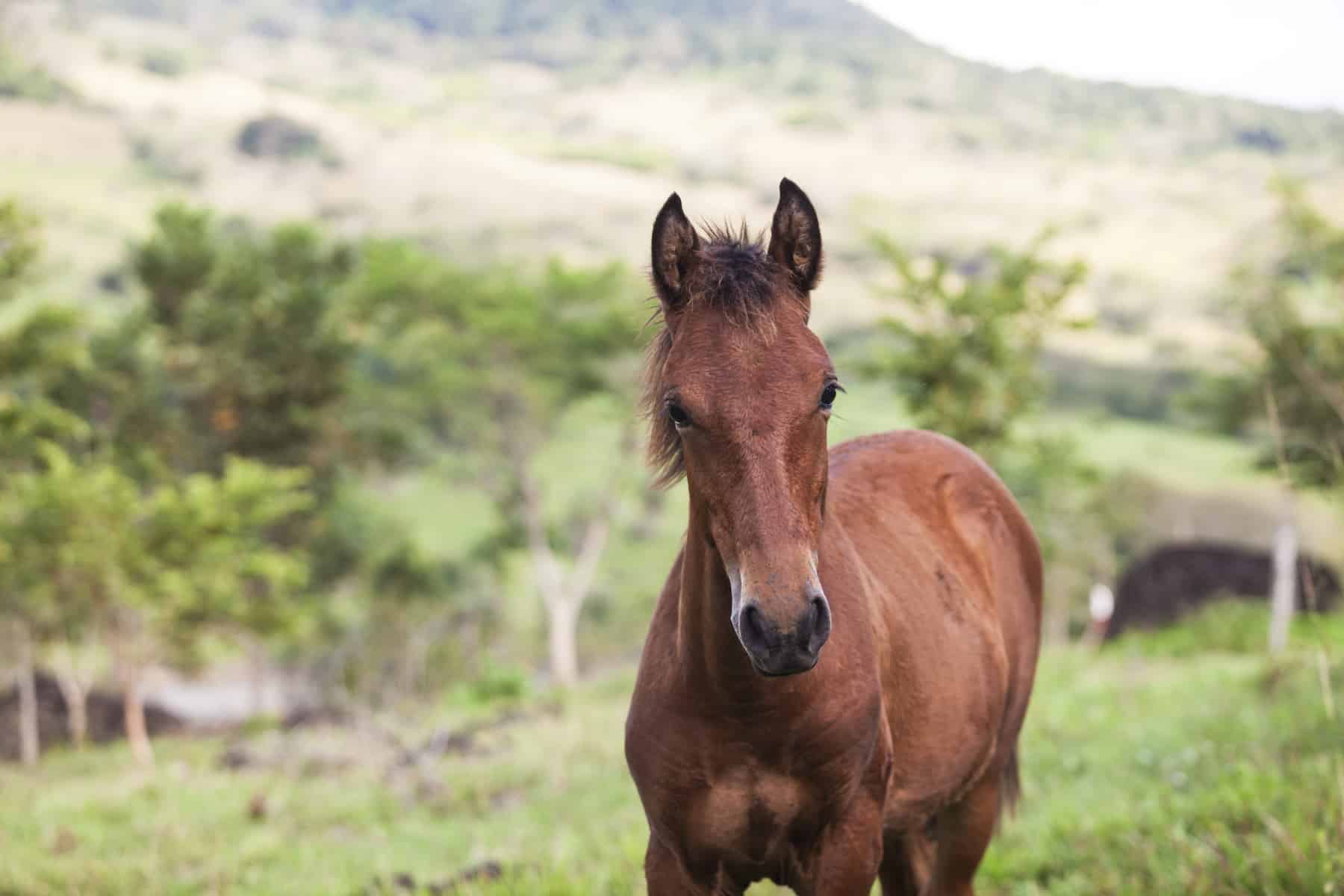 You look at that little 14-hand cutting mare which you have decided to breed. She’s a dandy, you think, but just a little small for general ranch work or pleasure riding. So, you take her to that 16-plus-hand Thoroughbred in the next county and breed her. Eleven months later, you walk out to the barn and there in the stall is a newborn foal which has just struggled to its feet and is nursing for the first time.

You look at the wobbly, leggy little creature and wonder: Just how big will this youngster be when it grows up? You have heard about formulas for determining the size a foal will be as an adult, but you can’t remember just what they are.

Perhaps, you think, the newcomer will grow up to be taller than its dam, but not as tall as its sire. That is your hope and breeding goal. But, will it happen?

You call your veterinarian and are told, yes, some old horsemen have formulas they swear by, but there really isn’t anything in equine medical or scientific literature that proves that any of these formulas are accurate. They likely will hit the mark in a case or two, but just as often they will miss.

The reason no specific formula works in all instances is that there are variables involved. The variables include such things as genetics, nutrition, and health care, among others. Figuring more prominently than any other variable into the equation is genetics. When sperm meets egg, the die is cast, so to speak. At that early stage, the horse-to-be has already received its entire genetic blueprint for life, including the gene that will dictate its growth potential.

Before we can understand what we are addressing in the way of genetics and growth, we must do a quick review of what happens at conception concerning the passage of traits by sire and dam.

Each horse’s body contains a multitude of cells. Within each cell is the genetic blueprint for that animal. The blueprint–or genetic material–is carried on chromosomes, which are slender, thread-like structures that are paired. A horse has 64 chromosomes, or 32 pair. At various locations–referred to as loci–on these chromosomes are genes. A gene is comprised of a DNA nucleotide sequence. Just as is the case with chromosomes, genes exist in pairs. The two genes that are paired are referred to as alleles. However, just because they exist in pairs, doesn’t mean the pairs are identical. Often, they are not. Related Content | It’s All in the Genes: Horse Traits and Heritability

This passing of traits occurs at the moment of conception. When the sperm fertilizes the egg, the paired chromosomes of each parent split, with a single set of 32 chromosomes from each joining to form a new pair for a total of 64 individual chromosomes. This means, of course, that there is a new pairing of genes or alleles. So now the potential offspring of the two individuals is endowed with a complete set of genes from each parent. The way in which the genes pair up will determine which genes are expressed.

There are two types of genes-dominant and recessive. The genetic rule of thumb is that the dominant gene will always have its way when paired with a recessive gene. Sometimes, however, both parents pass on a recessive gene for a particular trait, and it is that recessive gene that is expressed.

Let us, for a brief moment, take a step back into history and look at the work of Gregor Mendel. He decided to produce hybrid plants by crossing purple flowered plants with white flowered plants. He also did the reverse. He fertilized plants that produced purple flowers with pollen from a white-flower plant.

At that time, one of the prevailing theories was that if plants with opposing colors were crossed, the result would be a plant that was intermediate in color. In the case of the white-flowered plant being crossed with the purple-flowered, the result might have been expected to be a light lavender.

Mendel proved that theory to be groundless. He did not get any plants with intermediate coloration with a crossbreeding program.

All of this brings us back to our earlier scenario involving the breeding of a short mare to a tall stallion. Genetics will dictate that we won’t get the in-between horse we have been seeking. The offspring would have inherited one or the other of the parent’s genes for growth. If it received the mare’s gene for growth, the offspring will likely wind up being short. If it inherited the stallion’s growth gene, it will likely be tall. This does not mean that the offspring will be the exact size of one of the parents. It means that one or the other of the genes-tall or short-will be expressed, and it is unlikely that the resultant foal would wind up midway between its parents in size.

Back To The Heights

Armed with that knowledge, it becomes easier at least to guess at the foal’s ultimate size. If its body structure and length of legs seem to be more like the sire than the dam, then it is likely that the foal will be approximately as tall as the sire. If its phenotype matches that of the dam, the offspring likely has inherited her growth gene and will approximate her in size.

A personal example involves two of the mares bred to our rather short, double Doc Bar-bred cutting horse stallion. One of the mares is a registered Quarter Horse which is about the same size as the stallion. It didn’t take a genius to determine what size the foal would be. Sure enough, when the colt was born, its phenotype indicated that it would grow up to be about the same size as both sire and dam. No big mystery there.

Another mare bred to the same stallion is our ranching partner’s purebred Arabian. She is tall and leggy. Her filly at birth portrayed the same phenotype as the mare. At weaning time, she was a couple of inches taller than the colt, and there is every reason to believe that she will grow and develop into a mare which is approximately the same size as her dam because that apparently is the growth gene she inherited.

Nutrition can affect the rate of growth, but unless it is severely lacking, it generally won’t alter the ultimate size outcome as dictated by genetics.

The power of genetic determination was demonstrated in one study by C.G. Khitenkov a number of years ago. Khitenkov conducted a trial in which three groups of foals were fed under varied regimens. In one group, the foals received adequate feed from birth to five years of age. The other group received adequate feed up to 1 1/2 years of age, insufficient feed from 1 1/2 to two years, then adequate feed. The third group received insufficient feed up to 12 months, then normal feed.

The results demonstrated that the restricted-feed animals grew more slowly, but Khitenkov concluded that under subsequent favorable conditions of feeding and care, the horses made up for the delay in growth.

Fifteen years later, researchers M. Witt and B. Lohse conducted research on the effect of different winter feeding programs on the growth of Fjord horses up to the third year of life. They were seeking to determine if winter weather had an adverse effect on equine growth.

However, because of the good feed they received during the summer, the horses fed only hay in the winter were able to recover, and after three years, there were no differences in skeletal size or body measurements between the two groups.

Despite those findings, most researchers, veterinarians, and horse owners will agree that severe diet restriction during the first year of life can result in small, stunted animals which are unable to reach their genetic growth potential.

The reason for this is pretty basic. The first year of a horse’s life involves a period of very rapid growth. With some, it is so rapid that at 12 months of age, the animal will have reached 90% of its adult height and 75% of its mature weight. For others, those plateaus might not be reached until 18 to 24 months of age.

The horse will continue to grow at a much slower pace at least until about five years of age and, in some cases, for as many as seven years of age.

Of course, as has been pointed out in other articles, overly rapid growth can bring about a number of afflictions, including epiphysitis and resulting limb deformities.

Perhaps the best measure of growth in a horse is weight, but it also can be the most difficult to monitor because many horsemen do not have a scale on which the horse can be weighed regularly.

However, there is an alternative for horse owners who want to check growth progress in their quest to determine what the final size will be. Researcher G.W. Willoughby devised a formula whereby one can use heartgirth measurements in an effort to determine weight.

So what is the final message or messages involving estimating a foal’s adult size?

There is no tried and true method that is 100% accurate. Instead, we must look at the overall picture, beginning with genetics. By studying phenotype, we can fairly well determine which growth gene has been inherited. Using Willoughby’s formula involving heartgirth measurements, we can at least get an idea of how rapidly the young horse is growing.

It should be strongly noted that although genetic determination can overcome a shoddy nutritional program and result in a horse reaching its genetically determined size, this approach is definitely not to be recommended. While the horse might ultimately reach the same size as it would have on a sound nutritional program, some irreparable problems-especially those involving bone formation and muscle development-might have been encountered along the way.