Groom Your Horse With His Comfort in Mind

“Optimized” grooming led to as many as 177 times more positive behaviors on average per horse per 10-minute grooming session than standard grooming, researchers found. 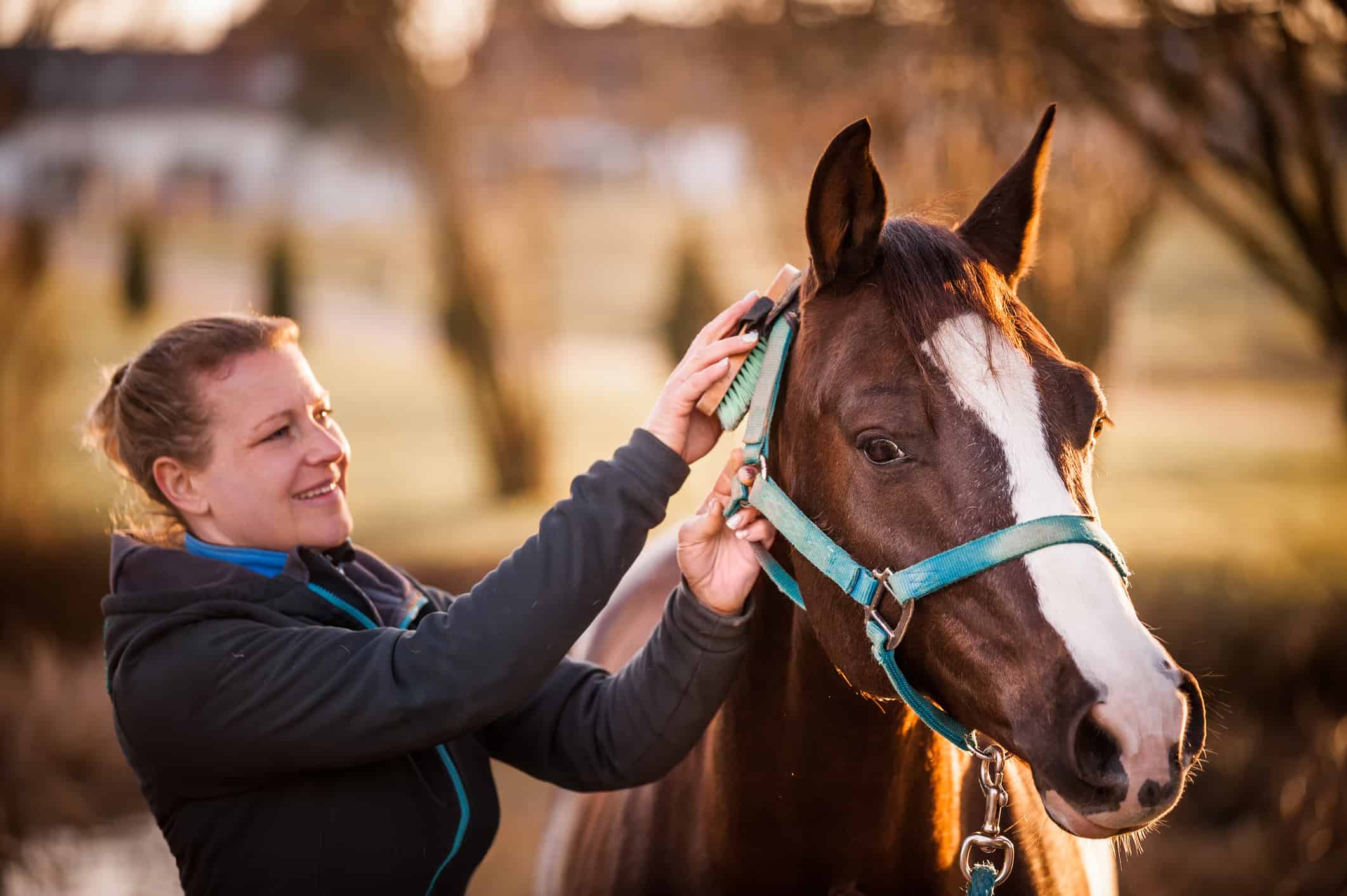 If your horse doesn’t like being groomed, he’s not alone. French researchers recently found that only 5% of horses showed positive behaviors during a standard grooming session. And those that didn’t often demonstrated negative or even dangerous behaviors.

That’s why the same research group developed an “optimized” grooming method that includes massages. Perhaps the most enhanced aspect, though, is incorporating equine feedback—the handlers learned to pay attention to their horses’ signs of comfort and discomfort and to respond accordingly. The result? Optimized grooming led to as many as 177 times more positive behaviors on average per horse per 10-minute grooming session than standard grooming.

“Horses in our study receiving optimized grooming clearly sought contact with the handler and never showed signs of discomfort or defense,” said Léa Lansade, PhD, of the French Horse and Riding Institute and the National Institute for Agricultural Research’s behavior science department, in Tours.

“By contrast, the horses receiving standard grooming showed many more behaviors of discomfort and rapidly developed defense responses, which could lead to accidents or incidents like those we’ve already observed in the field,” she said during her presentation at the 2017 French Equine Research Day, in Paris.

In their study, Lansade and colleagues worked with 27 2- or 3-year-old Welsh pony mares. The mares had had very little contact with humans other than for basic management (feeding, housing, and veterinary care). They divided the mares into two experimental groups, each of which was groomed for 10 minutes, once a day for 11 days.

In the “optimized” group (13 horses), handlers:

The handlers learned to recognize if the mares expressed comfort or discomfort based on their body language. When the horse showed discomfort (such as laid-back ears, avoidance, or back muscle contraction), the handler immediately modified the massage by trying something else—a different movement or part of the body. When the horse showed comfort (seeking contact with handler or trying to groom the handler, for instance), the handler continued that movement, increasing the pressure of the massage within the limit of the horse’s positive reactions.

The scientists also recorded each horse’s facial expressions during the grooming session and took blood samples at the start of the experiment and before and after the final session.

They found that horses in the optimized group had much lower levels of oxytocin (indicating less anxiety-related stress) in their blood by the end of the experiment. Not only was this oxytocin level lower after the grooming session but it was also lower just before the final grooming session, compared to the standard group.

“This suggests that these horses had developed a better relationship with humans and so were less stressed by the simple fact that humans were coming into the stall with a halter and a needle for a blood test than the horses in the standard grooming group,” Lansade said.

“Sensitizing handlers to these kinds of facial expressions could help them read the emotional state of their horses and adapt their grooming practices themselves to make their horses more comfortable,” she said.

Finally, horses in the optimized group showed considerably more positive and considerably fewer negative behavioral reactions than those in the standard group. On average, for each 10-minute session, optimized-grooming horses made 29 contacts with the handler and attempted contact 144 times. These horses also showed two bouts of stretching and two leg lifts (indicating pleasure). By contrast, the standard grooming horses made only one contact with the handler and exhibited none of the other positive behaviors.

“Grooming that takes into account the horse’s reactions and includes massages of preferred zones leads to numerous positive behaviors and no defensive reactions,” Lansade said. Incidentally, the optimized grooming also resulted in equally clean horses, which is a primarily goal of grooming, she added.

“Repeated on a daily basis, these manipulations could probably have lasting impact on equine welfare and the horse-human relationship,” she said. “But standard grooming can lead to defensive actions and, hence, accidents and a compromised interspecies relationship.” If you are interested in adopting this horse, please submit an ‘Adoption Inquiry’ via our website: Allaboutequine dot org. No…
07/01/2021
Total views: 1804