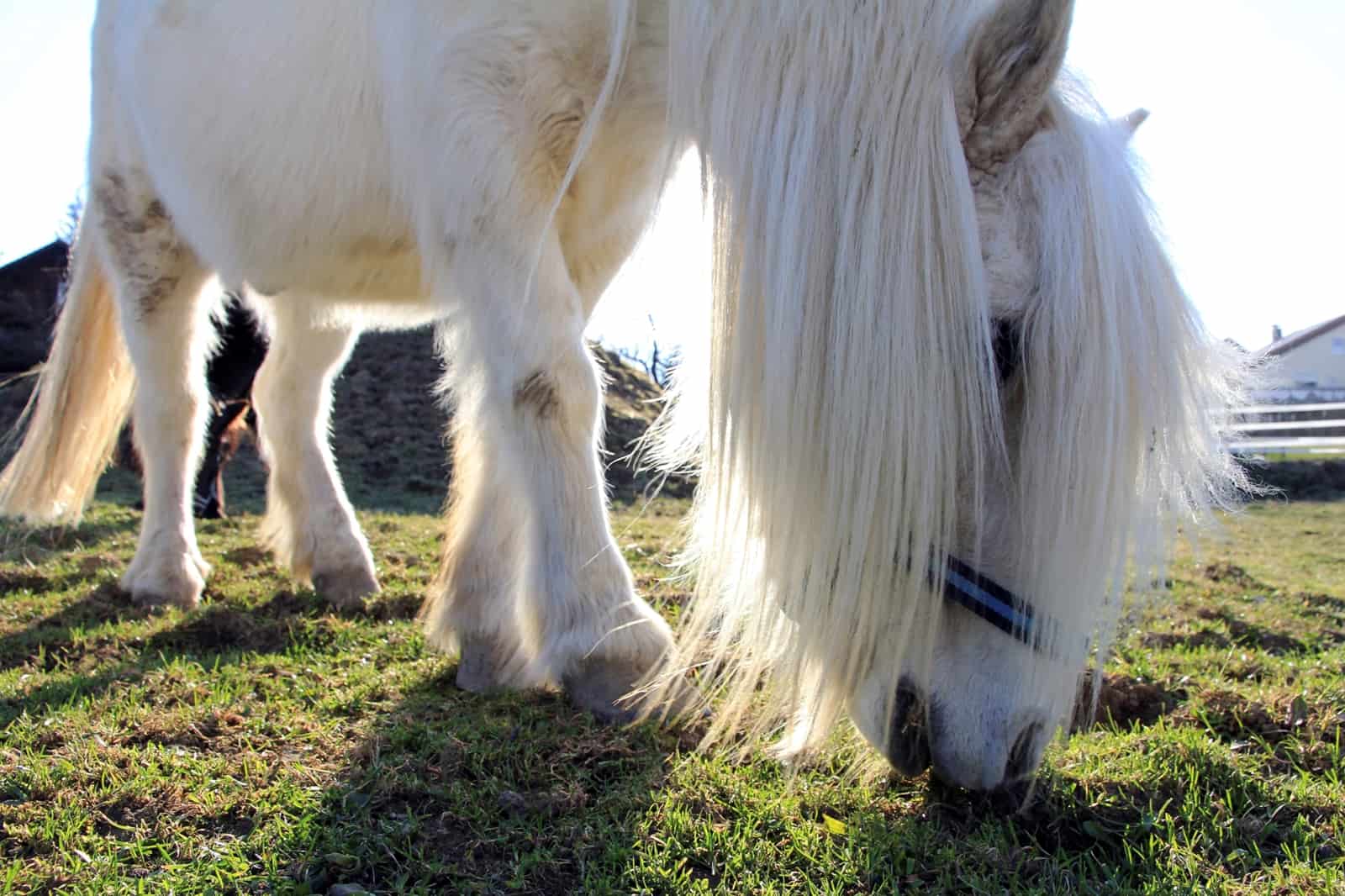 Q: My veterinarian is concerned that my 22-year-old gelding might have metabolic issues, so we tested him for Cushing’s and insulin resistance. We just got the results back and his ACTH was close to 150 pg/ml (normal range 9 to 35) and his insulin was 45 uIU/ml (normal 10 to 40). We will be starting him on pergolide, but I would like to know how I should manage his diet. What suggestions do you have?

A: In the fall, measuring a horses adrenocorticotropic hormone (ACTH) levels is often used as a diagnostic tool for pituitary pars intermedia dysfunction (PPID, also known as equine Cushing’s disease). It peaks between mid-August to mid-October as part of the metabolic preparation for winter and results in levels anywhere up to about three times those found at other times of the year. It used to be thought that this made early fall a poor time of year to use ACTH levels as a diagnostic tool. However, in recent years, research has shown that horses with PPID have a seasonal rise that is even higher than unaffected horses. Contrary to previous belief this might in fact make fall a good time of year to test due to the potential for a more profound response to the seasonal ACTH rise in horses with PPID.

The pituitary tumors associated with PPID influences the adrenal glands to release cortisol, a stress-related hormone. Cortisol plays an important role in the metabolism of carbohydrates, proteins, and fats and helps to balance the effects of insulin in the breakdown of sugar for energy. It is a vitally important hormone; however, when elevated for extended periods, as in the case of high circulating ACTH, high cortisol levels could have some negative consequences. These include inducing a degree of insulin resistance (IR), muscle wasting, a pot-belly appearance, immune deficiency, and an increased susceptibility to infections.

You horse’s elevated insulin level might be the result of the effects of the elevated ACTH on cortisol levels due to PPID. Of course some horses have high levels of circulating insulin indicative of IR without having PPID. But in horses with PPID, especially those not considered to be at risk of IR, IR is commonly the result of the PPID.

Insulin’s major role in the body is to signal cells to take up glucose in order to maintain circulating blood glucose levels within a relatively tight range. When cells become insensitive to insulin the pancreas secretes more insulin to get the same job done. Diabetes, where both circulating insulin and glucose levels are high, is rare in horses and occurs only in extreme cases. When cells cannot get the energy they need from glucose the body mobilizes fat. However, high insulin levels also reduce the burning of fuels in muscle tissue and so the fat is stored sometimes leading to unusual fat deposits such as the development of a cresty neck, fatty sheath, or tail head area as seen in some horses with IR.

Fat stores are not the benign deposits we once thought they were. Fat is actually active tissue secreting pro-inflammatory cytokines that have an effect throughout the horse’s body. Therefore, horses with IR might have continuous low-grade inflammation. Additionally unchecked elevated insulin levels increase a horse’s risk for developing laminitis.

How Diet Changes Can Help

Cushing’s is managed with pharmaceuticals. However, because horses with PPID are at risk of developing—or already have—IR, nutritionists and veterinarians generally recommend feeding a diet low in non-structural carbohydrate (NSC). An NSC diet can stabilize levels of circulating glucose so that no significant elevation in insulin occurs.

Many people worry about removing grain and treats from their PPID/IR horse’s diet. While grains and treats high in starch and sugar should be removed, the No. 1 concern needs to be your horse’s forage. As I see it, you won’t make the positive impact needed by removing a small amount of grain from the diet if the horse continues to eat   1.5% or more of its body weight per day of hay that’s high in NSCs.

All horse feeds, including forages fed to horses with PPID and IR, should contain no more than 10% combined starch and ether soluble carbohydrate (ESC), which is a form of carbohydrate that—like starch—is digested in and absorbed from the small intestine. Both starch and ESC lead to raised circulating glucose levels and in turn insulin. Some very sensitive horses appear to benefit from having low water soluble carbohydrate (WSC) levels in the diet. The WSC fraction generally contains the ESC fraction but also some slightly more complex sugars. Those researching metabolic conditions in horses generally recommend that horses with PPID and/or IR be fed forages with no more than 12% starch and WSC on a dry matter basis.

Note: In plant science, WSC and starch are known collectively as NSC. However, not everyone defines this term the same way, so it’s important when assessing feeds by NSC level to find out how the value was calculated. That way you can compare different feeds d more accurately.

Of course, all this information on different values is irrelevant if the forages you are feeding are not tested. You cannot accurately tell any of these values by looking at a hay. Therefore, I highly recommend testing hays. A test that provides a complete profile of all the carbohydrate fractions plus much more should cost you no more than about $30. But, frequent changes in hay might make testing impractical.

If hay is not tested or is higher in WSC than is ideal, it should be soaked to remove some portion of the sugars. Soaking for 30 to 60 minutes is adequate, using hot water might be more effective than using cold water, and soaking for hours should be avoided as other nutrients could be removed in addition to the sugars. The amount of sugar removed will vary with each hay and might still be higher than ideal, although better than if not soaked. Again the only way to know if truly safe is to test a sample after it has been soaked.

Grass hays are typically best for horses with PPID and IR; however, alfalfa generally tests as having lower NSC than grass hays and might be a good option in some situations. I avoid alfalfa if the horse is over weight as, per pound, alfalfa provides more calories than most grass hays. Anecdotally some PPID or IR horses are reported as doing poorly on alfalfa. I think it is a matter of knowing your horse and making decisions based on that particular individual. I typically keep alfalfa at no more than about 25 to 30% of the forage for most of the horses I work with whether or not they have PPID or IR.

A potential benefit of some alfalfa for a horses with PPID that can suffer with muscle wastage is that the improved protein quality in the diet that results might help maintain muscle mass. For the same reason a high-protein ration balancing feed that is low in NSC (most are low in NSC but not all, so check with your manufacturer) can be a very good choice for horses with PPID. They also insure the all necessary micronutrients are being provided which is vital for the effective functioning of metabolism and immune system.

Other options when testing forage or soaking are not possible include utilizing commercial chopped, pelleted, or cubed forages that have guaranteed NSC levels. You can feed these instead of some or all of your other forage to reduce the diet’s overall NSC. Sugar beet pulp without molasses is another low-NSC option for replacing some of your forage.

While the pathophysiology of PPID is still not fully understood, some studies suggestion that horses with PPID have a higher level of oxidative stress that might contribute to the loss of hypothalamic innervation in the pituitary. This, combined with the fact that a common sign of PPID is reduced immune function in affected horses, suggests that supplementation with antioxidants might offer support. Vitamin C production in the horse’s liver might not be as effective in senior horses, and hay is typically quite in vitamin E. Therefore, providing supplemental sources of both these important antioxidants might benefit PPID horses.

With prompt diagnosis, drug therapy with regular blood work to check dosage, and a well-managed diet, many horses with PPID can enjoy many happy and active years.