Top 5 Signs Your Horse Is Stressed Out, Right Now

Can you see the signs of stress? Horse behavior experts share what to look for in your horse. A little bit of stress isn’t a bad thing, researchers tell us. In fact, it can be useful—like getting a horse moving when he’s in danger of being attacked. Plus, “learning can’t even happen without stress,” explained Katrina Merkies, PhD, associate professor and equine behavior researcher at the University of Guelph, in Ontario, Canada. Still, there’s a limit to “useful” stress, Merkies said. And past a certain (yet undefined) threshold, stress can become problematic.

Essentially, stress isn’t OK anymore when it’s either too great in the moment or too long-lasting over time, said Natalie Waran, PhD, professor of One Welfare at the Eastern Institute of Technology, in Hawke’s Bay, New Zealand. Intense “acute” (short-term) and “chronic” (long-term) stress can lead to important health and welfare issues for horses.

“We have a responsibility toward our horses to ensure they’re living a good life, and we can help do that by keeping their stress levels to a minimum,” she said.

Stress can also affect the safety of the humans around them, Waran said. Stressed horses can become dangerous as they act out in defense with abrupt movements such as kicking, biting, bucking, and bolting. “I’ve seen far too many cases of injuries resulting from people ignoring the signs of stress for too long as they continue to escalate,” she said.

In other words, if your horse is slightly stressed, it might be fine. But you shouldn’t let your horse get “stressed out,” the researchers explain. While scientists have yet to determine the exact line between acceptable and unacceptable stress, handlers can pay attention to signs that their horses aren’t coping well with acute or chronic stress levels.

In this article, we’ll take a closer look at signs of acute stress in horses. Would you recognize them? According to one recent study, most people don’t. Or if they do, they might be ignoring them, said Merkies.

“People can be very accepting of stressed-out horses, as though it’s just normal that their horse is being obstinate or stubborn, for example, when actually there’s a serious stress issue going on,” she said.

Waran agreed. “Stress is a word that gets used so frequently in the human world, we tend to just normalize it,” she said. “But if you really appreciate the emotions that the horse is going through when he’s experiencing stress, you realize that, actually, it’s not normal at all.”

It’s better to acknowledge when your horse has passed a stress threshold, our sources say, and change what you’re doing to reduce his stress levels. You’ll be promoting his health and welfare, as well as an improved horse-human relationship.

Horses have their own range of facial expressions, and scientists are homing in on what expressions mean what. The Horse Grimace Scale (HGS) is getting fine-tuned for detecting pain in ridden and unridden horses, but no validated grimace scale for detecting stress exists yet, Merkies said. Still, researchers generally agree that telltale signs of stress in a horse’s face include flared nostrils, widely opened eyes with whites showing, a tightened mouth (which is harder to see when the horse has a bit in his mouth), and high head carriage.

Recent studies show that, depending on the kind of stress, horses might blink significantly less when they’re experiencing acute stress, Merkies said. That includes full blinks (eyelids completely down) and half-blinks (eyelids half closed). And regardless the kind of stress, they tend to have more fluttering of the eyes—a sort of rapid muscle movement in the eyebrow area. Of course, if you want to know if your horse is blinking less or fluttering his eyes more than usual, you’ll have to pay attention to what’s normal for him when he’s not stressed as well, she added.

Stress seems to trigger horses’ digestive systems to accelerate intestinal movement. When stressed, they poop frequently, Merkies said. “If a horse stops and has one really big poop, that could actually mean he’s relaxed,” she explained. “But if he’s having frequent poops that get more and more liquid or even spurt out, that suggests he’s probably reached that threshold and is too stressed.” 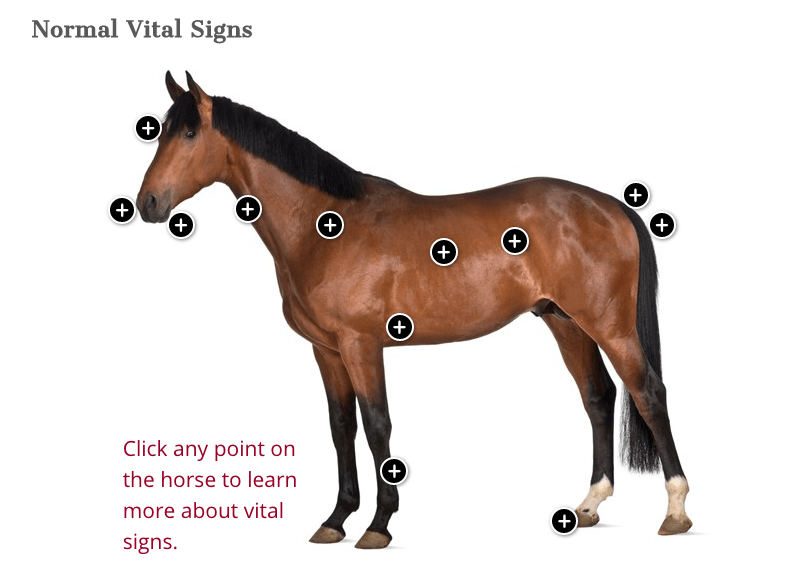 Stress doesn’t just cause changes in a horse’s behavior. It also causes physiological responses, including increased heart and respiratory rate, our sources say. While this information is useful for scientists doing research on equine stress levels, it can also be a practical gauge for handlers, said Waran. “If you’re attuned to your horse, you can hear his breathing rate change, and you can feel his heart rate increase right under you,” she said, adding that this is a sure way for her to pick up on stress in her own riding mare. Handlers should spend quality time with their horses in a nonstressful situation just getting to know what’s normal for them, she explained. Avoid using a stethoscope on your horse’s chest or checking his pulse with your hand on his fetlock, though, because these methods could be dangerous with acutely stressed horses. (See #5.) Wearable heart monitors currently provide scientists with continuous, real-time feedback about these physiological signs in horses.

As prey animals, horses frequently react to stress by trying to get away from the perceived danger. As stress increases, they might at first be jittery or spook at objects or be unwilling to stand still, Merkies said. But as stress levels increase, their movement—including how long and how far they move—probably increase accordingly. This can put humans at danger, because they can get knocked over, stepped on, or thrown off by these sudden, seemingly careless movements. (They might not be so careless, she added. “Maybe they move closer to humans when they’re anxious because they feel like [the humans] provide security,” she theorized.) In situations of extreme acute stress, they might pull back and break a halter, try to jump through the front door of a trailer, run through a fence, or gallop into traffic. On the opposite end of the spectrum, stressed horses might simply freeze, she explained. “That’s almost worse than the movement, because you know that at any moment, they’re likely to explode.”

Horses experience many kinds of acute and chronic stress, and they can each have different, unique reactions to stress, the researchers said. So while these five signs are useful guides, the best way to detect stress in your horse is to know him well enough pick up on changes in the way he acts, sounds, or feels.

“Ideally, people can create a profile of their own horses, noting what they see as signs of positive emotions and then being aware of when those are less frequent or change,” Waran said. “Once you have that knowledge, you can make informed decisions about how to manage stressful situations to reduce that stress as much as possible, so that at the end of the day you can say of your horse, ‘Mine is having a good life.’”