Does Your Horse’s Saddle Fit?

Having your saddle fit is paramount to your horse’s comfort and soundness. Imagine buying a pair of hiking boots in preparation for a six-month trek across the great American wilderness. Any old boot will do, right? Just the cheapest? Or maybe you should buy a name brand online in your size and hope it fits. After all, if it doesn’t, you can always just add extra layers of socks!

Of course you wouldn’t do that to yourself. Not only would it kill your feet, but the way you’d walk to compensate for the pain could end up causing knee, hip, and back pain, as well. You’d probably drag along behind the others in your group. And that uncomfortable fit could make you a particularly grumpy hiker prone to complaining and getting into arguments.

While the hiking boot situation might seem absurd, the reality is that we riders do this all the time to our horses. If you think saddle fit is overrated, take a moment to think about those miserable hiking boots. Asking your horse to perform under a poorly fitted saddle is going to cause him pain and musculoskeletal issues. Ultimately, it’ll make him a poor performer—perhaps with a sour attitude, to boot.

What’s in a Good Fit?

A good fit starts with the saddle’s tree, says Annette Gavin, Society of Master Saddlers qualified master saddler and owner of Hastilow Competition Saddles, in Warfordsburg, Pennsylvania. “The tree is the most important part, because it’s the mediator between the horse and the rider, as it allows a level platform since neither the horse nor the rider is inherently level,” she says.

The tree is the most important part, because it’s the mediator between the horse and rider.
Annette Gavin
Trees come in a few very basic shapes—-narrow, normal, and wide—that need customization for each horse. “The tree has to follow the horse’s contour and muscles,” says Gavin.

The saddle panels that lie beneath the tree also need to follow the shape of the horse’s back and sides, she adds. A well-fitting saddle distributes weight evenly across the panels to the thoracic region, completely clearing the withers and spinous processes (which stick up from each vertebra), says Sue Dyson, MA, VetMB, PhD, DEO, FRCVS, head of clinical orthopedics at the Animal Health Trust Centre for Equine Studies, in Newmarket, U.K.

The saddle should stay relatively immobile during ridden work in all gaits, Dyson adds. It should also allow the horse to move freely and comfortably, without areas of high pressure that can cause pain or prevent proper blood flow and sweating.

A professional conducting a thorough saddle assessment looks for all of these things with the saddle off and on the horse, with and without a rider, and before and after exercise. 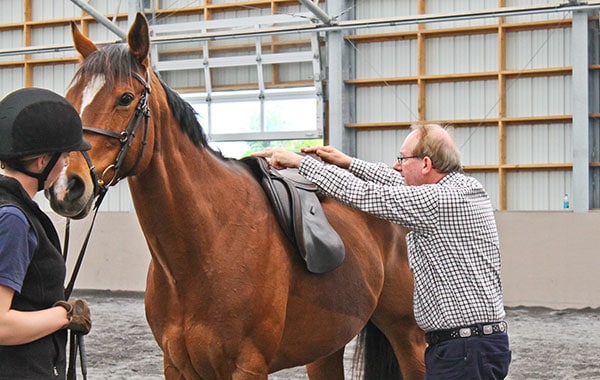 What’s in a Bad Fit?

A poorly fitting tree will “dig into the horse, causing damaging pressure points,” says Gavin. Those pressure points can interfere with proper circulation to the skin, causing the sweat glands to malfunction. The horse won’t sweat in those areas, and eventually the pressure will impede blood circulation.

“It’s like if you push your thumb against your arm; that spot is going to turn white until you let go and let the blood flow to it again,” she says.

In the horse, though, that pressure can last your whole ride—which might be hours long. Eventually that hair will turn white and even fall out, leaving bald spots, sores, and calluses. Poorly fitting saddles can also cause swelling in various areas of the back or small lumps that can eventually turn into hard knots over time.

Soreness from an ill-fitting saddle can cause a horse to hollow his back or push his shoulder into the saddle, Gavin adds. That’s going to cause imbalance and uneven limb-loading that can lead to lameness. RELATED CONTENT: Signs That Your Saddle Doesn’t Fit Your Horse

Poor saddle fit can even keep a horse from building muscle properly. In a study Dyson and her colleagues conducted at the AHT, horses’ back muscle dimensions changed, becoming wider by about 1-1.5 cm during a 30-minute exercise session under properly fitted saddles. When the saddles did not fit, however, horses’ back muscles did not undergo these natural changes that occur with exercise. This can affect long-term muscle development, leading to an undermuscled horse, she says.

Finally, the pain horses feel due to an ill-fitting saddle can make them “crabby,” says Gavin. They might act out during a ride with defensive behavior such as bucking or kicking, or they could even bite at their sides. They might also develop performance issues, such as unwillingness to round in the back or reluctance to bend in one or both ­directions.

The Continually Evolving Back

There are as many back shapes out there as there are hoof shapes. And just as your farrier wouldn’t carry around only three shoe sizes for all horses, a few basic saddle sizes won’t work for all backs.

Our sources stress that a horse’s back shape depends on breeding and genetics, age, and physical condition.

The evolution of the modern sport horse has played an important role in that back shape variation, Gavin says. Whereas in previous centuries horses had specific roles as work horses—drafts, war horses, racehorses, ranch horses, etc.—now there’s a shift toward a variety of pleasure and recreational horse types.

“Mixed breeding has made it so that the standard ‘Thoroughbred’ saddle and ‘pony cob’ saddle just don’t apply as well as they used to,” she says.

But even an individual horse’s back will evolve considerably over its lifetime. It changes shape significantly as the horse grows, and it gains mass with age and muscle with exercise. As a result, a growing horse’s saddle must be adjusted several times—often every six months—until the horse is 8 or 9 years old, says Gavin.

“But We’ve Always Done it This Way …”

“A lot of times people just got lucky,” says Gavin. “Some saddles might actually end up being a good fit as they are. But some horses are really stoic and just won’t ‘say anything’ about the pain. A lot of times the horse does act out, and the people assume it’s just a difficult horse, and they sell the horse when what they should have been doing was selling the saddle.” The Pad: The Sock That Makes the Shoe Fit Worse

Researchers say it again and again: A poorly fitting saddle can’t be fixed with a pad. It’s like trying to fix a badly fitting shoe by adding more layers of sock. In fact, there’s very little scientific rationale for using pads and half-pads, says Dyson. Mostly, they just serve to absorb sweat and keep the saddle clean.

However, there are a few exceptions in which a pad can be a temporary fix, she adds. Anja Kotschwar, DVM, prior to becoming an assessor for veterinary medicinal products at the Austrian Agency for Health and Food Safety was a research associate for the Movement Science Group at University of Veterinary Medicine, in Vienna. She found in her research that pads can sometimes help horses “grow into” their saddles. “Wider saddles leave growing room in developing horses and the gaps can be fixed with pads,” says Kotschwar.

Saddle fitting isn’t just for the elite competition horse. In fact, it’s quite the opposite. Our sources agree that the significant level of work high-level horses do means their bodies resist poorly fitting saddles better than horses with less muscling. Girthing up the weekend warrior can mean subjecting that horse to pain on its softer muscles and more exposed skeletal system. While you might look forward to that weekend trail ride all week long, your horse might actually associate it with discomfort.

Fitting Your Horse—and You!

A properly fitted saddle fits both horse and rider. Our sources say having a saddle fitted to the rider allows him or her to sit in balance with the horse, benefiting both rider and horse health.

Unbalanced riding can cause the horse back pain, Dyson says. It can also lead to rider back pain, hip pain, seat bone sores, and even injuries to the perineal area. Modifying, Not Replacing, Your Saddle

Saddle fitting isn’t about measuring your unfit horse for a $3,000 custom-made saddle (that would then only have to be replaced as his back changes). Master saddlers evaluate and measure your horse’s back and in many cases can adjust your current saddle to fit his particular shape.

The most adaptable saddles are English saddles with wool flocking and those with modifiable wooden or metal trees. Saddlers can adjust them fairly quickly and easily as the horse changes shape. Western saddle trees are more difficult to modify because they are “carved, contoured, or molded, so the shape you see is the shape you get,” says Gavin. Saddle fit solutions for these trees, therefore, include using special pads with foam shimming systems.

“We have a lot of options,” she says. “It’s not usually a dire situation of ‘Oh my word, you’ve got to buy a brand new saddle.’ ”

Well Worth the Price

While saddle fitting might still sound like a luxury for some, the reality is saddle fitters’ fees generally fall into the same range as those for veterinarians, farriers, equine dentists, and chiropractors.

For average riding horses our sources recommend an annual consultation. But if work level changes significantly during that year, riders should have saddles evaluated again. Young horses up to age 8 or 9 need fittings twice a year, and mature competition horses usually need up to three fittings a year, because the intense work can cause the flocking to compress.

“It’s an added expense to horse ownership, but it’s preventive,” says Gavin. “If your horse goes lame from a poorly fitted saddle, or you sell your horse for behavior issues, the financial losses are much greater.”

When You Really Need That Custom Fit …

Every now and then, a saddler recommends starting off with a whole new custom-fitted saddle for your horse. But it’s a smart investment, says Gavin, because you can be sure of the saddle’s quality and fit for your horse.

Some saddlers allow their clients to trade in their custom saddles as their horses’ backs change; riders only pay a fraction of the cost for the new saddle after the trade-in.

For the health and welfare of your mount, having an expert assess your saddle fit, and adjust the saddle properly, is as important as getting hooves trimmed and teeth floated regularly by ­professionals.

We have an "AMAZING Lineup" of exciting and available Thoroughbreds for you to meet. They have been rehabilitated, retrained and…
08/06/2019
Total views: 29710