Scientists found that a professional’s light, steady, straight pull at a slightly downward angle relieved pain at several sites along the equine spine. 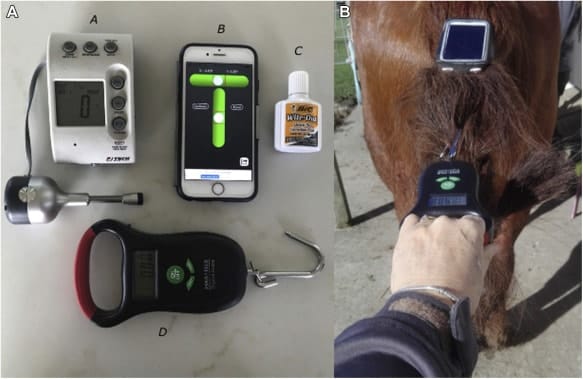 Pulling a horse’s tail to relieve back pain might seem like a surprising approach to some owners, or even unfounded. But researchers have just confirmed this technique—in the hands of experienced professionals—works.

A light, steady, straight pull at a slightly downward angle appears to make horses feel less pain in several critical sites along the sides of the spine, said physiotherapist Heli K. Hyytiäinen, PhD, of the Department of Clinical Equine and Small Animal Medicine in the University of Helsinki’s Faculty of Veterinary Medicine, in Finland.

Commonly called a “tail pull” or a “tail stretch,” caudal traction—as it’s known among scientists—can provide immediate relief to discomfort in the area, Hyytiäinen said. How it does this is, however, not fully understood.

“We do know that the deep core back muscles extend all the way into the tail head, so this may be a way of allowing these muscles to stretch,” Hyytiäinen said ”Or the mechanism may be via mobilization of the nerves (neural mobilization), which is known to provide pain relief in humans. We do not think the technique works by pulling joints apart, which can happen during similar therapy in humans in which physiotherapists stretch out the vertebral column.” Equine caudal traction seems to affect soft tissue more, and possibly nerves as well, she said.

“The soft tissue structures of the horses’ backs are very complex, and the tail is an important part of all those structures, so the effect may be based on very different mechanisms than, for example, in humans,” said Hyytiäinen, adding that separating horses’ joints probably wouldn’t be preferable. They need to stay firm and compact because of their horizontal position and the need to support a rider’s weight, and to allow them to endure the forces subjected to their spines during locomotion, she explained

Measuring Back Pain Before and After Tail Stretching

Hyytiäinen and her fellow researchers used pressure meters to evaluate pain reactions in 11 horses when the animals felt pressure on six points across their backs. Veterinarians had already diagnosed the horses (four Warmbloods, four Thoroughbred crosses, two Quarter Horses, and one Appaloosa, ranging in age from 6 to 29 years) with different grades of back pain and subtle lameness.

The researchers noted how much pressure the horses would accept before showing a behavioral pain reaction, such as muscle twitching, eyes widening, or ear-pinning. Then the researchers carefully pulled each horse’s tail three times at a 30-degree angle down from the vertical, directly backward, with the precise force of 4.5 kg. Each pull lasted 20 seconds, with a 10-second rest between each pull. Afterward they used the pressure meter again in the same six points along the back to see if the horses behaved differently.

They found the horses showed pain relief at every tested point on the back after caudal traction, Hyytiäinen said. The horses benefited most in the thoracic region—the part of the back over the rib cage that would support a saddle—with 83% improvement. Pain relief in the pelvis area improved by 52%, and the lumbar region by 50%.

Exciting and Surprising, but Not to be Tried at Home

Such significant changes came as a surprise, Hyytiäinen said. However, this doesn’t mean owners should start pulling their horses’ tails to relieve any back pain. She cautioned that the technique should be reserved for professionals.

“I am not suggesting that people should pull their horse’s tails ever—and especially if the horse’s back is painful,” she said. “On the contrary … this method should only be used by an educated professional, a physiotherapist, who has appropriate understanding of the entirety of the horse’s situation and skills to apply the technique safely and correctly. There is more to it than just pulling the tail of a horse.”

Additionally, even though these results show promise, Hyytiäinen said she recommends further studies to better understand the mechanisms behind these findings before recommending the procedure as entirely safe and effective.