Alternative joint injections to corticosteroids not only keep horses comfortable but also offer a chance at healing rather than simply masking pain. 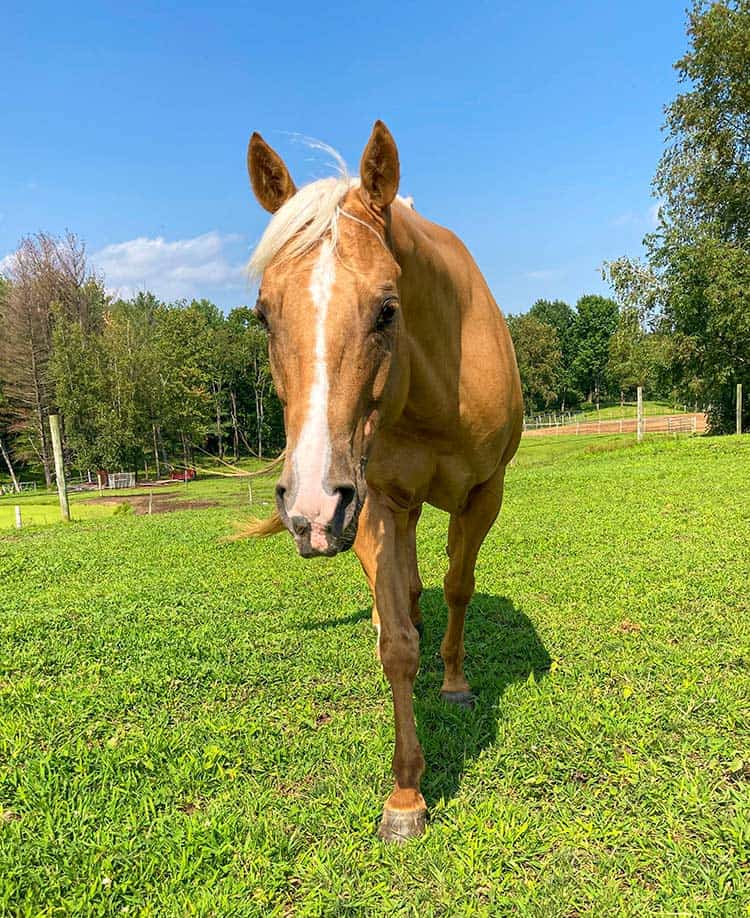 Last fall Bill Riel bought a 7-year-old palomino mare as a young team roping heel horse prospect. Less than six months later, however, she began limping in the pasture and during light work. A veterinary exam revealed a stifle injury.

Strict stall rest was mandatory. Then Riel’s veterinarian offered him a choice of joint injections to give his mare the best chance at recovery: stem cells or a blood-derived product resembling boosted platelet-rich plasma. Notably, neither contained corticosteroids. Riel opted for the latter largely based on the price point. At the time of this writing, the mare had spent three months on layup, received a month of cold-water-spa treatments, and had been released to do conditioning rides. She is currently sound and building strength to get back in the rodeo pen.

Post-injury rehabilitation like what Riel’s mare underwent is only one reason a horse could need joint injections. Osteoarthritis (OA) and maintenance of the typical aches and pains of performance might make injections necessary, as well.

Veterinarians now have injectable options beyond corticosteroids that pose fewer risks to insulin-­resistant, metabolic, or Cushing’s (pituitary pars intermedia dysfunction, or PPID) horses and promote healing rather than just reduction of inflammation and pain relief.

“All performance horses are at risk for the development of joint disease from repetitive trauma and could potentially benefit from the alternative treatments mentioned,” says Lauren V. Schnabel, DVM, PhD, Dipl. ACVS, ACVSMR, associate professor of equine orthopedic surgery at North Carolina State College of Veterinary Medicine, in Raleigh. “The alternative treatments may also be beneficial for any horse with a joint injury from a single trauma such as a pasture accident or fall.”

Corticosteroids are potent, cost-­effective anti-inflammatories. For arthritic joints they can be beneficial, and for decades they were the go-to treatment for joint injuries. These medications still have their place in keeping horses comfortable, but they’re not without risks. Infection at the injection site (a risk with any joint injection) and laminitis-inducing reactions to corticosteroids can occur. Once joint injections commence, they often need to be continued to maintain a horse’s comfort throughout his life.

In the past decade veterinarians have begun to drift away from corticosteroids, says Florent David, DVM, MS, Dipl. ACVS, ECVS, ACVSMR, ECVSMR, ECVDI Assoc, a specialist in surgery, sports medicine and rehabilitation, and diagnostic imaging at the Equine Veterinary Medical Center, in Doha, Qatar. At one time he estimated he administered corticosteroids to 80% of joint-related lameness cases. Today he uses corticosteroids in fewer than 50% of these cases.

One of David’s concerns with corticosteroids is they can mask pain, allowing the horse to load the affected joint more than he would if unmedicated and increasing his risk for a catastrophic injury such as a fracture.

“I also don’t like the risk for laminitis that corticosteroids can pose to horses that are predisposed to insulin resistance or metabolic issues,” he says. “Sometimes there isn’t time for a complete work-up to see if the horse has that profile.”

“For joint disease that includes a soft tissue injury such as a meniscal injury in a stifle or a collateral ligament around a joint, biologic and regenerative therapies seem to have a real benefit over steroids for helping heal soft tissue injury and thereby limit further joint inflammation and disease,” Schnabel says.

Cosmetic surgeons have long used polyacrylamide gel (PAAG, a nondegradable synthetic watery gel) as a soft tissue filler material in face-lifts and lip procedures. David considers the cosmetic filler an exciting advancement in joint treatments. He says it can help horses with early stage to chronic OA and might one day help prevent joint damage when conformation issues predispose a horse to develop OA.

“It’s not a painkiller, but when injected into the joint, it integrates within the joint capsule, and the pain usually goes away within two to four weeks from injection,” he says. “It’s not a cure for everything, but this medication is useful in horses that have not responded to other treatments.”

Currently, two commercial options exist: a 2.5% and a 4% solution. David says further research is needed to compare the gels side by side.

One particular question to answer is whether we should combine PAAGs with corticosteroids. Used in combination, David explains, the cocktail can alleviate immediate pain (corticosteroids) while prolonging benefits (PAAG). “I see vets doing this more and more, but I’m not so sure this is a smart strategy,” he says. “Among others, the one thing we don’t know is how it affects corticosteroids’ doping time.”

Regenerative therapies let us dig more into the problem itself and try to change the course of the disease.

The regenerative medicine umbrella includes stem cell therapy as well as biologic therapies that concentrate or stimulate specific blood components to trigger natural processes that alleviate inflammation and promote healing. With the latter, the concentration of platelets in platelet-rich plasma or the stimulation of white blood cells causes the release of proteins such as interleukin-1 receptor antagonist protein (IRAP), says Schnabel.

“That helps alleviate inflammation and restore normal joint health,” she says. “IRAP specifically blocks the receptor for the major inflammatory protein in joint disease, which is interleukin-1, thereby blocking its effect.”

Many of the kits only take 20 to 30 minutes for the veterinarian to process and administer at the barn.

“Ideally, these alternatives offer a longer-lasting effect than steroids,” he says. “However, the prognosis much more depends on the disease (chronicity and severity) and horse (age, discipline, build) than the treatment alone.”

Stem cell therapies are also popular joint injection options following an injury. Whether taken from the patient’s own bone marrow or derived from another source, such as the umbilical cord or amnion, stem cells can encourage healing, says Schnabel.

“Regenerative therapies let us dig more into the problem itself and try to change the course of the disease,” he says. “The problem with regenerative therapies is that when embarking on that road you have to stick with the protocol, and it can take a while before you can conclude if this treatment is going to help the horse.”

If a horse’s healing is progressing slowly, he says not to be discouraged because the goal is to target the disease itself. After an initial IRAP injection, for example, he says he follows up every seven to 10 days for three to six additional treatments. Each regenerative product involves a specific protocol that he adjusts to each injury or condition, patient, and owner’s wallet.

The Cost of Alternative Injections

Corticosteroids are popular joint injection options because they cost $40 to $100 per injection. Synthetic joint lubricants are the next step up, costing around $300 to $500. Schnabel estimates that biologic treatments set you back about $500 to $1,000 and regenerative therapies average $2,000 to $3,000. Fees vary by location and clinic, however, and do not include the farm call, associated diagnostics, or actual joint injection fees, she adds.

Again, with most alternative options, it takes several weeks for their full effect to be visible. Like David, vets might administer IRAP in multiple doses over six to 12 weeks—the same goes for stem cells. And, as mentioned, it might take two to four weeks to see the effects of PAAG injections. Researchers are still working to determine how long the benefits of the latter therapy last, but they expect six months to a year or longer in some cases.

“Most of these therapies are used in high-motion joints such as the coffin joint, fetlock, and carpus (knee), for which full range of motion is critical for performance or racing, but they are also commonly used in difficult-to-manage joints like the coffin and pastern joints,” Schnabel says. “They are less commonly used in low-motion joints that can be fused, like the distal (lower) hock joints.”

While these joint therapies are exciting, they are not appropriate for every horse and disease, says Drumm. It’s the vet’s discretion and responsibility to choose the right treatment for each case. Plus, when treating joint disease, you’ll never find a panacea but, rather, a combination of approaches, including systemic and intra-articular medications, controlled exercise programs, supplements, and physiotherapy, that works for your horse.

“We are just at the beginning of understanding these therapies and … how to best use them for optimal results,” Schnabel says. “I’m very excited to continue to work on optimization of these therapies, particularly for cases of cartilage damage and soft tissue injury within the joint for which steroids typically don’t work well or for very long.”