Some people believe petting a fearful horse will teach it to act more upset in the future. Read what our expert says. 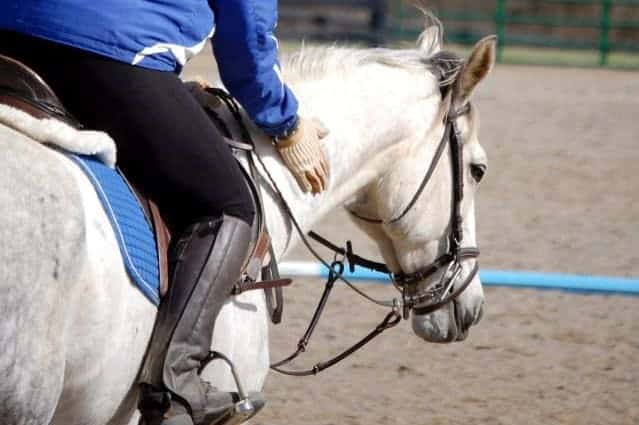 Q. I’ve taken my horse to a few clinics. She is nervous around unfamiliar horses, so I usually scratch and talk to her in a soothing voice when she gets tense, but am worried that the attention might actually be rewarding her fear. Should I ignore her instead?

A. Many horses experience tension and social anxiety around unfamiliar horses, especially at clinics and shows where the location is also new. Other common fears include novel objects, and sudden movements and sounds.

Fear and anxiety are automatic responses triggered by something in the environment that the horse sees as a potential threat. Reassuring the horse with a scratch on the withers, and talking to it in a soothing voice, can calm the horse and help it cope with the stressful situation. Touch can be therapeutic and is believed to reduce physiological arousal and provide relief from anxiety; when the horse is relaxed it can function more normally. In a study presented at the 2015 International Society for Equitation Science conference,1 horses that were scratched on the withers for one minute showed more relaxed behaviors, such as a lowered head, compared to horses that were patted on the neck or not touched at all.

Touching and talking to the horse do not always have a soothing influence, so it’s important to observe the horse’s body language for signs of increasing tension. Anxiety might increase because fearful animals often do not value social attention, some horses become irritated when they are touched, and some sounds and touches that seem reassuring—such as neck patting—are actually stimulating.1 In these instances, petting the horse can heighten fear or cause the horse to become agitated. Another caution is that some owners scratch and talk to the horse to reduce their own anxieties and can telegraph these negative emotions to the horse.

It’s a common myth that petting a nervous horse will reward the fear. One reason for the misconception is that attention can function as a reward for voluntary behaviors, such as attention-seeking, but not for involuntary reactions, such as fear and anxiety. For example, if a horse nose-bumps the owner (a voluntary behavior) and the owner scratches the horse’s withers (reward), the nose-bumping behavior will be repeated. Voluntary behaviors like nose-bumping persist as long as they are rewarded and disappear when they are ignored. In contrast, fear and anxiety are involuntary reactions elicited by perceived threats in the environment; they persist as long as the threat is present, and disappear when the threat is gone.

Petting and talking to the horse in a soothing voice can have a calming effect that reduces tension, but are not always necessary. Ignoring a horse’s fear when the situation is mildly stressful also has value. Exposure to stressors that toughen the animal can be protective, because these experiences help the horse develop resiliency for coping with future challenges on its own.2 In addition, when there is a strong and trusting relationship between the human and animal, the owner can become a safety signal for the horse. A safety signal is a cue associated with protection from danger, and simply being near the owner can inhibit the horse’s fear and anxiety.3,4