Brush up on your hay feeder knowledge with these 10 research-based tidbits. This one overeats, chewing at a round bale day and night while his belly grows. That one likes to pick up a mouthful, shake it around, eat two strands, and stomp on the rest. The rest rain mouthfuls of perfectly good forage onto the ground. And all the while you’re asking yourself, “This isn’t the way horses naturally eat in the wild; am I doing the right thing?”

If your horse overeats, undereats, or wastes his food, it might be time to consider installing a hay feeder in his stall and/or pasture. And lucky for you, researchers are well at work to get feeders right. The Horse has been following their progress, and we’ve come up with 10 “feeder facts” you’ll be happy to know about.

1. Feeding without feeders, or with inadequate feeders, can lead to health conditions such as colic, intestinal parasites, and malnutrition.

Why not just feed directly on the ground? Despite the fact that horses naturally eat off the ground all the time, placing supplemental forage there might not be in their best health interest.

Ground feeding can also significantly increase a horse’s intestinal parasite load, Friend says (particularly if horses are not on a proper parasite control program), because these worms lurk on blades of grass waiting to be consumed. Once ingested, parasites can cause weight loss, bloating, colic, and reduced performance. 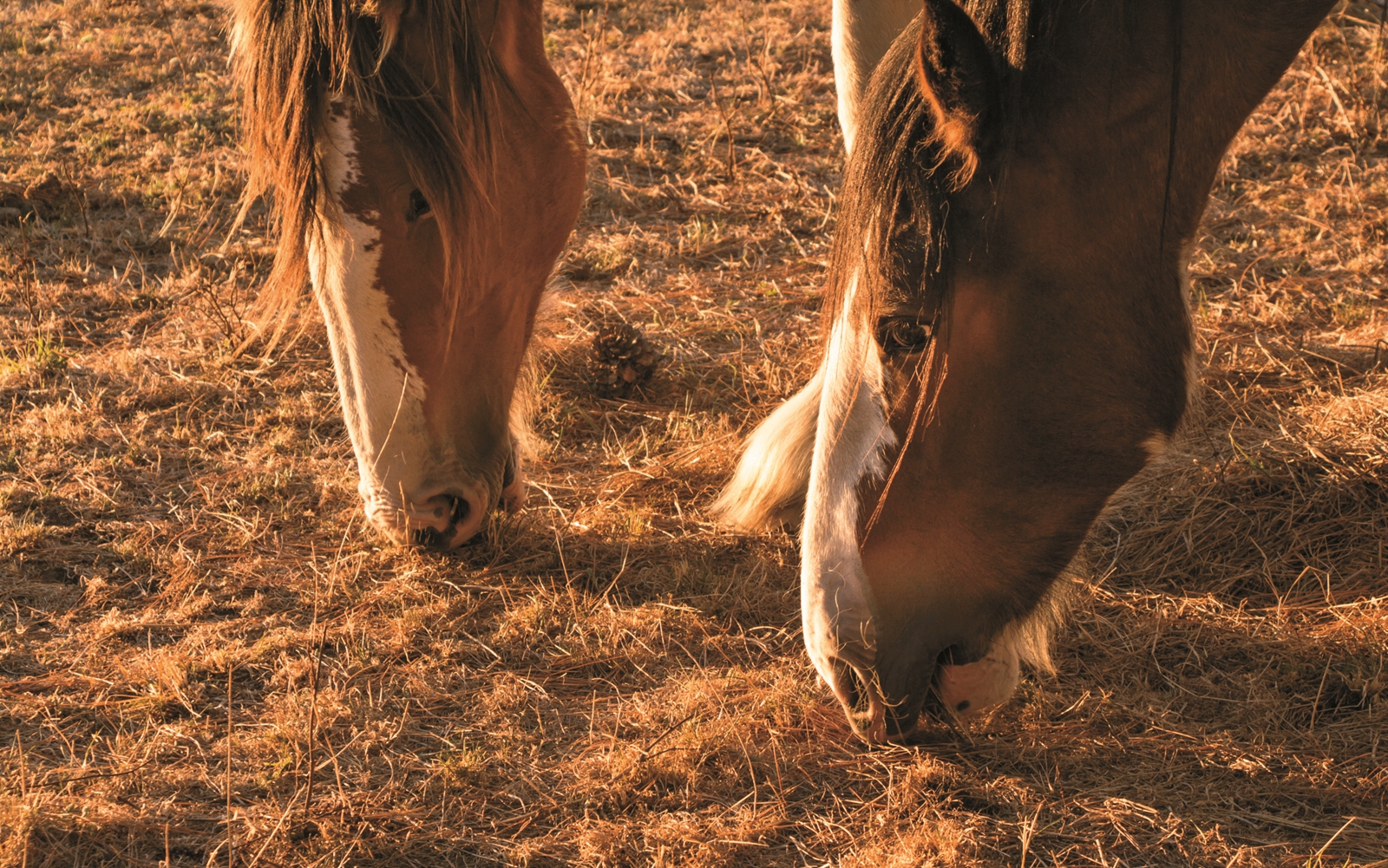 Malnutrition is also a risk of ground feeding, says Krishona Martinson, PhD, equine extension specialist in the department of animal science at the University of Minnesota, in Saint Paul. In a recent study, Martinson found that for horses housed in dirt paddocks, consuming hay from round bales without a feeder did not fully meet their digestible energy (DE) requirements.

Even so, feeders don’t eliminate these risks entirely, Friend adds—especially sand colic and parasites, as horses also tend to pick up leftovers off the ground. The goal of using hay feeders is to keep as much of the food off the ground and in the horse’s stomach as possible.

When horses eat fast—as many are prone to do—they are at risk of developing choke (which, unlike choking in humans, describes an esophageal obstruction), says Friend. Partially chewed food can get lodged in the horse’s esophagus, causing excessive salivation, retching, gagging, coughing, and spilling of food out of the nostrils. Untreated, choke can lead to life-threatening conditions such as severe pneumonia or ruptures, tears, or holes in the esophagus.

Speedy eating, however, is a product of evolution, Friend says. Horses tend to eat fast and look up frequently due to their watchful prey-animal mentality. Domesticated horses might have maintained that instinct—but many of them, similar to humans, just really like their food.

3. In a difficult economy, well-designed feeders are critical.

When times are tough, horse welfare is of particular concern. Even well-meaning owners can find themselves strapped to feed their horses properly over a long winter or on poor pasture growth, especially when hay prices are high. So keeping your wallet healthy can help keep your horse healthy, too, because it will equip you to provide him adequate amounts of hay. Martinson says well-designed feeders can keep hay from going to waste.

Martinson and her colleagues recently tested nine different round bale feeders for efficiency and have planned a square bale feeder trial for later this year. So far her team has determined that whether or not you use a feeder makes a huge difference in how much hay waste results. There’s also an incredible difference in waste amount among the various kinds of feeders.

“One feeder (the Waste Less by JCI Innovations) was so efficient that it resulted in only 5% waste, while another (the “Hay Sleigh” by Smith Iron Works) resulted in 33% waste,” she says. “But even that 33% is a major improvement over the 57% waste we observed when a feeder was not used.”

How are these feeders so very efficient? Because they make it more difficult for the horse to remove the hay. “Essentially, the more restrictive the feeder is to the horse, the less waste,” says Martinson. “And that seems to also be true for the openings in hay nets: The smaller the size of the openings, the less waste.”

Unfortunately, as wastage amounts decrease, feeder prices increase. The good news, though, is that you do get your money’s worth. Martinson’s research results show that whatever you spend on the feeder, you’ll get it back in the amount of hay you save typically within a year. “If you have a round bale that costs $100 and you waste 57% without a feeder, that’s $57 you’ve just lost,” she says. “So the savings can add up quickly.”

4. You can’t just put any number of horses on a single feeder.

Owners must consider the number of horses sharing a hay feeder. Although researchers have not yet determined the “magic number” of horses that should eat off each round-bale-sized feeder, Martinson estimates it would be around four to six. Greater numbers of horses leads to competition among them for food (or you’re going to be refilling that feeder very frequently). Too few horses means the hay’s going to go bad before it’s consumed.

“When we did our round bale trial we had five horses on each feeder, and it worked out well,” Martinson says. “If you have one or two horses, you’re going to end up getting waste from just the weather—the rain and the sun will likely ruin the hay before it’s consumed. If you really want to put two horses on a round bale, get a feeder with a cover, or put the feeder under cover. If you can protect it from the elements, it will last much longer.”

5. Feeders must be maintained regularly.

They’re just horses, right? I mean, no matter what we do, they still nibble off the ground. So why should we worry about cleaning their feeders? “Most of the time you don’t have to,” says Friend. “But if there’s uneaten food in there, that needs to get cleaned out before it spoils. And, in general, you do need to check regularly for safety.”

Inspect your feeders from time to time for wear and damage, he says. Old plastic and synthetic rubber can become brittle and break or crack, posing injury risk to horses. Metal feeders can rust—and while it’s rare that enough rust will be present to cause any health risks to your horse, rusting’s oxygenation process means the metal is breaking down. At best, damaged metal can be abrasive, and at worst, it can break and create sharp points harmful to your horse’s mouth, tongue, face, neck, or chest while he eats.

Researchers don’t agree on the question of how high to set a feeder. But one thing they do agree on is that there are health advantages and disadvantages at different levels. Setting feeders high could put horses at risk of eye or airway irritation from dust and particulates. But setting them lower is only a “compromise,” says Friend.

“When it’s low it’s easier for the horse to stick his foot in it, or to fall over it,” he says. So where is the happy medium? For some horses, it might be obvious: For those with allergies, install feeders closer to the ground; for those that are accident-prone, raise feeders higher. When the choice isn’t clear, Friend says he recommends owners consult their veterinarians and follow their instincts.

It might be tempting to install automatic feeders, especially if you’re not a fan of early mornings or harsh weather. But while automatic feeders might reliably put food on the horse’s plate, they can’t perform all the other feeding-related “human” duties.

“When you go out to feed your horse, you’re checking on him,” says Friend. “One of the problems we always have in agriculture is when the feeding system gets automated, so people don’t have to go out and feed their animals, (and so) they don’t check on them as often.”

Feeding time is a chance to make sure the horse is sound and injury- and pain-free. It’s also an opportunity to monitor feed intake. “One of the best measures of your animal’s health is whether it’s eating normally,” he says.

Essentially, the more restrictive the feeder is to the horse, the less waste.

8. Yes, you can build your own safe, economical feeders.

The commercial market is full of feeder options, but they are not your only choices. If you’re handy in the workshop, you can certainly build your own feeder to keep costs down. Hay feeders should be made of metal, says Martinson, which requires some welding experience. But wooden feeders can work well, too—although don’t expect them to last as long. The chemicals used in pressure-treated wood aren’t safe to use on surfaces that animals will eat from, so you’ll have to build with untreated wood, which is more vulnerable to the elements and deterioration over time.

Recycling is another option, says Friend. “See what you have on-hand that could make a useful feeder,” he says. “Old bathtubs work really well. And I currently have an old calf feeder that works great for one of my own horses.”

9. Creativity can go a long way.

Sometimes you just have to work with your circumstances and devise creative solutions. Know what doesn’t work for your horse; then think of ways to fix that, says Friend. If he’s an anxious or easily excited horse who likes to look around all the time with food dropping out of his mouth, place the feeder in a corner. “The walls may limit how much the horse looks around, compared to placing the same feeder near the center of the wall,” he says.

10. Feeder preferences have a lot to do with the horse—and the human.

Choosing “just the right” feeder frequently comes down to a simple matter of personal preference. And our sources agree there’s no definite wrong or right feeder for every situation.

“My philosophy?” says Friend. “Horses all have different personalities. But most of the time it’s the person’s personality that matters. Most people want to feed their horses the way that makes them feel good about how they’re feeding them. There are lots of options, so they should really look at what works for them and their horses. And keep in mind that one thing doesn’t fit everything.”

Choosing the right feeder is above all a matter of preference. But consider the horse’s health, your budget, and your horse’s personality and individual needs (as well as your own). Knowing these 10 feeder facts can help you make the ideal choice for you and your equine partner.

If you are interested in adopting this horse, please submit an Adoption Inquiry via AAE's website; No texts please: www.allaboutequine[dot]org/how-to-adopt.html.…
01/13/2023
Total views: 144