Botulism in Horses: An Update

Learn about current recommendations for diagnosis and treatment of this often deadly disease. Rising hay prices and the financial crunch caused by 2009’s Great Recession drove many horse owners to seek less expensive forage sources, including large round bales, haylage, and silage. But according to Amy Johnson, DVM, Dipl. ACVIM, compromising on hay quality and feeding from half-ton bales led to a larger problem: an uptick in reported cases of equine botulism.

Johnson, who studies the disease at the University of Pennsylvania’s National Botulism Reference Laboratory and treats horses at the university’s New Bolton Center, presented a lecture on “Advances in Diagnosis and Treatment of Botulism” at the American College of Veterinary Internal Medicine Forum, held June 12-16, 2013, in Seattle, Wash.

So, what advances have taken place in the diagnosis of botulism in horses?

“The short version: Not as many as we’d like,” Johnson said lightly, before giving an overview of the bacterium, its toxin, the neurologic disease it causes, and current recommendations for diagnosis and treatment. 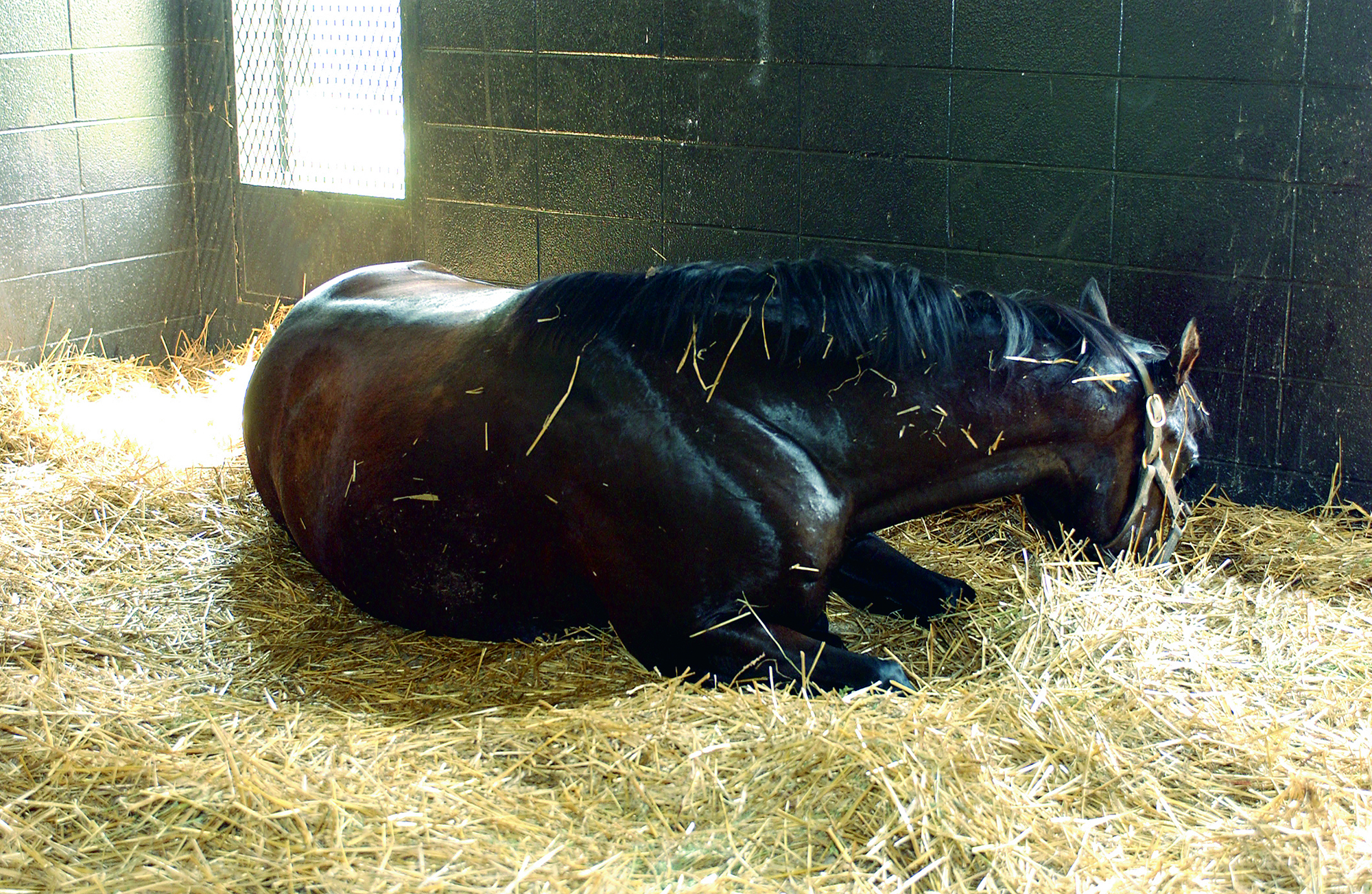 Botulism is a highly fatal, multispecies neurologic disease cause by the bacteria Clostridium botulinum and the toxin it produces. The Center for Disease Control classifies it as a Category A (highest priority/highest risk) agent, because it’s a food-safety concern for humans and poses a real risk as a bioterrorism weapon for use against human and animal populations. For those reasons, the disease has gained research interest as experts seek to detect, treat, and prevent the disease, Johnson said.

Despite their large size, horses are the most susceptible species to botulism toxicity, making them an important piece in understanding the botulism puzzle.

There are seven known strains of C. botulinum, described as types A through G. Types A and B are most common in horses and are usually acquired through forage sources, Johnson said, adding that type C is caused by carrion exposure (i.e., a decaying dead animal in feed). Type B is the only strain that has a vaccination marketed for use in horses. Types D through G have never been reported in horses in the United States.

Clinical signs of botulism include:

Veterinarians frequently misdiagnose horses with botulism as colic cases due to their restlessness and perceived discomfort because they lie down frequently. However, Johnson noted an important distinction between the two conditions: “The longer the horse (with botulism) stands, the more distressed it gets. The horse with botulism, once down, is usually very calm. Horses with colic often continue to look distressed when down, rolling or flank-watching.”

For more information about the disease, its related clinical signs, and treatment options, see TheHorse.com’s Fact Sheet “Botulism in Horses.”

A mouse bioassay is the species-wide “gold standard” for diagnosing botulism. In the simplest terms, this test exposes mice to samples from patients showing signs of botulism. If the sample contains botulism neurotoxin, and the mouse dies as a result, the horse likely has botulism. However, the mouse bioassay test takes time (anywhere from five days to two to three weeks depending on the sample), and time is something a horse with botulism doesn’t have, Johnson said.

“Laboratory confirmation with the mouse bioassay can be difficult,” she said. False negative results are common because it takes very little toxin to cause botulism in a horse, and what little toxin there is does not remain in the horse’s gastrointestinal tract or bloodstream for very long, she added.

Experienced practitioners will often base diagnosis on a horse’s clinical signs and case history. Pertinent case history information includes whether the horse lives in an endemic area and the animal’s current vaccination status against botulism Type B. Evaluation of feeding practices is also important because horses fed from large bales or with haylage or silage are more likely to contract botulism. Carrion exposure is also an important factor.

“In quite a few of the outbreaks, people find a dead cat or other animal in large bales of hay,” Johnson explained.

Botulism treatment includes a combination of antitoxin administration and supportive care. Veterinarians should give the horse antitoxin as soon as clinical signs and case history point toward botulism. “Every hour of delay reduces chances of survival,” she stressed.

At this time, horses can also receive the botulism Type B vaccine, Johnson said. Unlike with some diseases, natural exposure to botulinum toxin will not reliably stimulate the immune system of the horse to produce protective antibodies. Vaccinating the horse with the type B botulinum toxoid vaccine will reliably induce a protective immune response and prevent the horse from being susceptible to botulism in the future, she said. “Unfortunately, there is no cross-protection between types, so the type B vaccine will only protect against type B botulism and not against types A or C,” she said.

Antitoxin prevents additional botulism toxins from binding to their target, halting future progression of the disease, but does not reverse the disease or treat clinical signs. “So you should expect the horse to get a little bit worse before getting better,” Johnson said

Supportive care includes hydration, nutrition, and careful management of the down horse, Johnson said. She described recumbent horses with botulism as “Swiffers,” because they are very susceptible to “picking up” environmental contamination and as such become very susceptible to nosocomial (hospital-acquired) infections. They are also susceptible to pressure sores and secondary infection, even when receiving high-quality nursing care, she said.

For managing the down horse, Johnson recommended:

Practitioners and nursing staff should not force horses to ruse frequently or stand for prolonged periods, because doing so can weaken the horse and cause clinical signs to worsen, Johnson said.

She also doesn’t generally recommend sling support in the first one to three days of treatment. “However, after antitoxin treatment and stabilization of signs some severely affected horses will benefit from use of a sling to assist them to rise," she said.

In addition to pressure sores, complications in severely affected horses can include cellulitis (a diffuse inflammation resulting from infection of deep connective tissue), myositis (muscle inflammation), colic, cystitis (inflammation of the bladder), pneumonia, and salmonellosis.

A New Bolton study cites a 96% survival rate in a group of 30 shaker foals treated in the hospital and receiving antitoxin. Among those foals that required ventilation support, 88% survived. In comparison, an older study reported that 98% of foals not treated with antitoxin die, Johnson said.

Presently, no studies have examined the survival rate in a large group of adult horses with botulism. Based on a handful of published case reports, adult survival has been markedly lower than foals (90% mortality rate from Type A, 70% from type B, and 80% from Type C), Johnson pointed out. Horses managed intensively in hospital settings have a higher survival rate, but probably not more than 50% of adult horses survive the disease.

“It’s much harder to manage an adult horse with botulism,” Johnson explained.

Johnson and the other members of the National Botulism Reference Laboratory have optimized and validated polymerase chain reaction (PCR) techniques to detect the neurotoxin gene of C. botulinum in samples from equine cases of botulism.

The PCR assays will identify the three clinically relevant types (types A, B, and C) and have several benefits over the mouse bioassay. “Results are available more quickly, the false negative rate is lower, and no lab animals are used,” she said.

Additional objectives include finding, optimizing, and validating a test that will detect the botulinum neurotoxin itself in equine samples, Johnson said, adding that “if such a test exists, it will eliminate the need for the mouse bioassay.”