The Evolution of Equids and Dental Work

The modern horse’s dentition results from millions of years of evolution in response to changing food sources and climates. Likewise, how veterinarians treat today’s equine teeth must evolve and improve constantly. 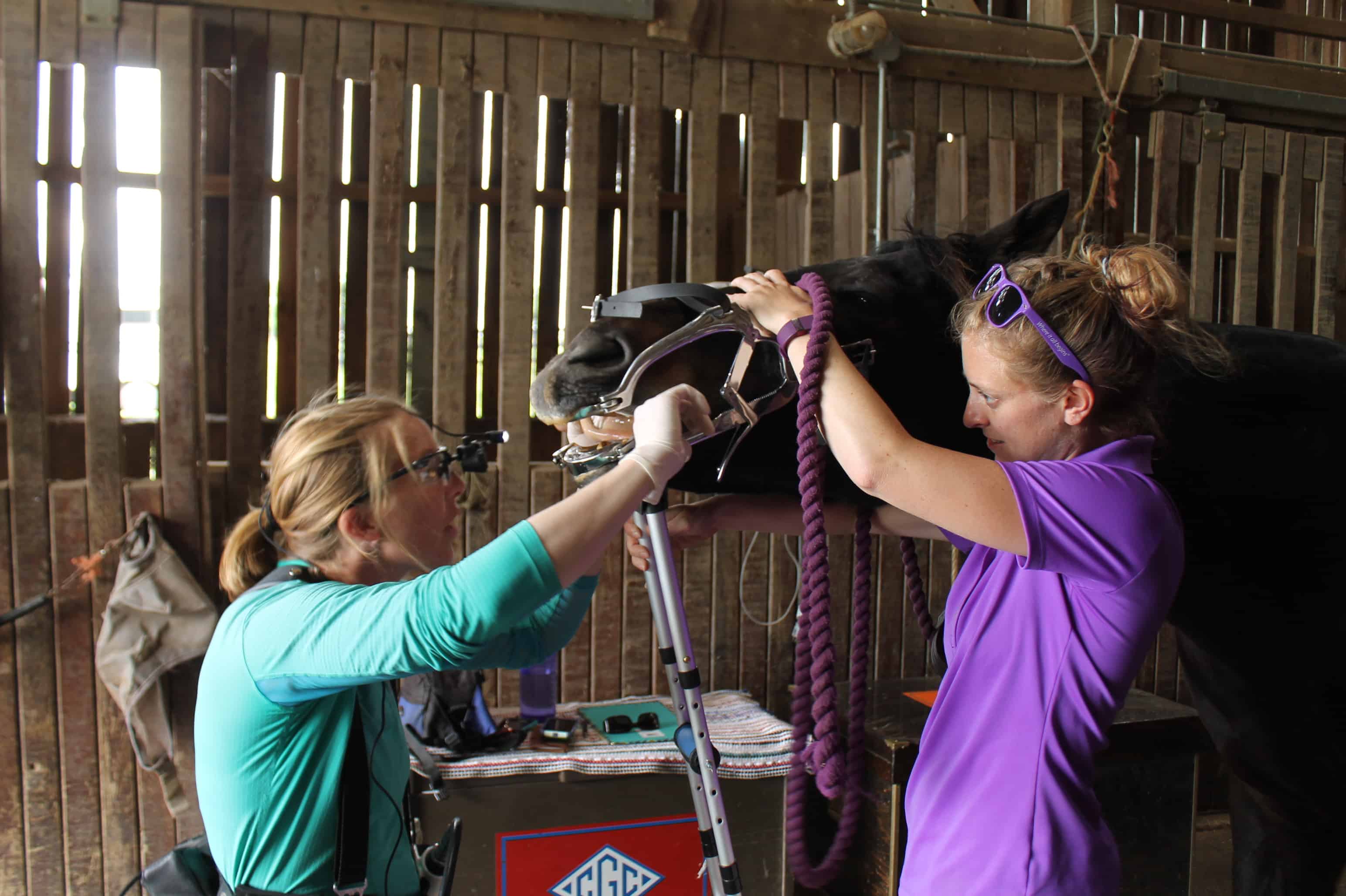 Dixon presented “The Evolution of Horses and the Evolution of Equine Dentistry” as the 2017 installment of the Frank J. Milne State-of-the-Art Lecture at the American Association of Equine Practitioners (AAEP) Convention, held Nov. 17-21 in San Antonio, Texas. The Milne lecture is a three-hour in-depth presentation focused on innovations in equine veterinary specialties.

Originally from Ireland, Dixon is a professor of equine surgery at the University of Edinburgh’s Royal (Dick) School of Veterinary Studies, in Scotland, where his research includes equine dental and upper airway disorders. In his AAEP lecture he covered equid evolution; dental tissues; equine domestication and early, postmodern, and contemporary dentistry; and dental disorders and disease.

Early Evolution of the Horse and Its Teeth

Hyracotherium (also known as eohippus, or the “Dawn Horse”) evolved in North America circa 55 million years ago during the Eocene era. A rabbit-sized animal, it lived in forest land and browsed on soft, leafy vegetation and had brachydont (having short crowns, well-developed roots, and only narrow canals in the roots) teeth similar to those of humans or dogs. These were unlike the hypsodont teeth (high-crowned with cementum extending past the gum line toward the occlusal (chewing) surface, providing extra structural material for dental wear and tear) of today’s horses.

The climatic event that ultimately extinguished dinosaurs preceded by some millions of years an increase in atmospheric carbon dioxide, which in turn favored growth of fibrous plants, such as tundra grasses. These grasses replaced the lusher, more nutritious vegetation Hyracotherium consumed. These fibrous plants’ cell walls contain more structural carbohydrates, including cellulose. In response to changes in available food, Hyracotherium and its descendants adapted their diet.

“Cellulose is the most common food substance on earth, but not a single living mammal can break it down,” Dixon said. “If you’d invented the enzyme that could break down cellulose, you’d solve the world’s energy and food problems overnight—you wouldn’t be here at AAEP—you’d be out in the Caribbean on a yacht.”

Rather, mammals rely on the complex community of microbes that live in the gut for help, Dixon said. Scientists are just now understanding the significance of the microbiome (the community of microorganisms in a particular environment, including the body or a part of the body) and its role in helping the body process food. As mastication (chewing) and digestion adapted to changing vegetation, the bacteria that make up the gut microbiome evolved in parallel to help equid ancestors digest cellulose, Dixon said.

“Over the past five to 10 years, scientific developments have altered the way we look at bacteria, and there’s been a complete shift in the paradigm about the microbiome and microbiota,” Dixon said, noting that the human mouth, even after brushing your teeth and rising with antimicrobial mouthwash, will still have more than 700 species left, many of them beneficial. “(Science’s understanding of) this is becoming so important, you’re going to hear a lot more about it in the future.”

Specific to equine dental care, Dixon expects researchers will learn more about the connection between microbes and periodontal disease, as well as digestion.

Returning to prehistory, Dixon explained that along with the changes in atmospheric carbon dioxide, the ancestors of today’s equids crossed the then land-bridge from what is now Alaska to Russia and on to the Asian continent— multiple times—and dispersed into the Middle East, Africa, and Europe. Meanwhile, they went extinct in North America during the last Ice Age 10,000 years ago.

“Horse have a low-efficiency gut and eat a low-energy diet,” Dixon said. “Because of this, they spend a lot of time grazing—between 16 and 18 hours a day—and this causes a lot of wear on the teeth.”

Many grasses and plants also contain silica and other phytoliths (minute mineral particles formed inside a plant), which also cause wear on the horse’s teeth, Dixon said. So, the short-toothed prehistoric equine ancestors evolved to have more durable, constantly erupting, longer teeth. A Look at Dental Tissues

Horses have incisors (used for cutting and tearing) and cheek teeth (premolars and molars used for grinding), wolf teeth (that were originally premolars) and canine teeth (used for defense in other species). Contrary to popular belief, horses’ teeth don’t continue to grow but, rather, erupt slowly and constantly above the gum line with age until they expire. Dixon described the following dental tissues that make up or are related to equine teeth:

All these tissues and the complete tooth structure have evolved in horses is such a way “to grind cellulose down to 2-millimeter sizes so the gut microbes can break it down,” Dixon said.

Humans likely first domesticated horses as production rather than riding animals, Dixon said. Ancient archeological sites in what is now Ukraine and Kazakhstan from 4,000 B.C. indicate humans first kept horses for milking; other sites offer evidence of butchering. The main evidence of early domestication is abnormal wear on the first cheek tooth in remains from horses wearing bits.

The Scientific Revolution of the 16th and 17th centuries and the Age of Enlightenment (1685-1815) followed the Dark Age in Europe (a time with little advancement; meanwhile, the Middle East saw many scientific and mathematical discoveries, Dixon said) and ushered in the first real scientific advances in veterinary medicine. During this time the first veterinary colleges opened in France and Britain.

The first U.S. veterinary college was established in 1875. By the late 19th century German and American surgeons had developed innovative equine dental tools, Dixon said, while some British veterinarians and colleges saw little need for advancement in the field. As internal combustion engines replaced horses in the early 1900s, equine veterinary medicine entered what Dixon referred to as the “second Dark Ages” due to dwindling working equine populations.

During that time, Germans led scientific research in equine dental care until the 1930s. Post-World War II, as the world economy and prosperity grew, so did interest in the recreational use of horses. This period saw the inception of breed registries in the United States. “You didn’t have to be rich to own a horse,” Dixon said. With horse ownership growing in the middle class, equine veterinary medicine advancement grew, as well, partially spurred by the formation of the AAEP and British Equine Veterinary Association (BEVA) in the 1950s and ’60s.

During this time and through the 1980s, owner interest in equine dentistry grew, but veterinary students still received limited dental training. This left a void of veterinary equine dental expertise, Dixon said, and allowed room in the market for lay equine “dentists” without veterinary training. He said some of these lay “dentists” did—and still do—offer detrimental services, such as “performance floats,” bit seating, and incisor tooth reductions. Dixon describes this work as aggressive and often exposes the sensitive tooth dentin and pulp, causing pain and tooth damage. Unfortunately, some veterinarians adopted these unproven procedures, as well, he added. In the second part of his lecture, Dixon moved into an overview of today’s equine dental practices, starting with the standard veterinary dental exam. Dental exams should, at a minimum, take place annually and more often for horses that are young, old, or have pre-existing dental issues. Veterinary dental exams are typically done under sedation and involve:

Because much of the equine tooth lies below the gum line, radiography is necessary to evaluate root and reserve crown disorders.

During the exam, veterinarians look for indications of dental disorders and diseases and create treatment plans—from floating to extractions—in response to what they find. Some of the dental disorders Dixon covered included:

Horses evolved over millions of years in response to climate and subsequent food changes. Specifically, the wear from near-constant grazing of mineral-rich grasses led to tougher, continuously erupting teeth. Veterinary understanding of equine teeth continues to evolve, as well, and dental care should be performed by a licensed veterinarian and based on scientifically proven protocols and with an in-depth understanding of dental anatomy and pathology. Doing so leads to improved equine health and welfare.