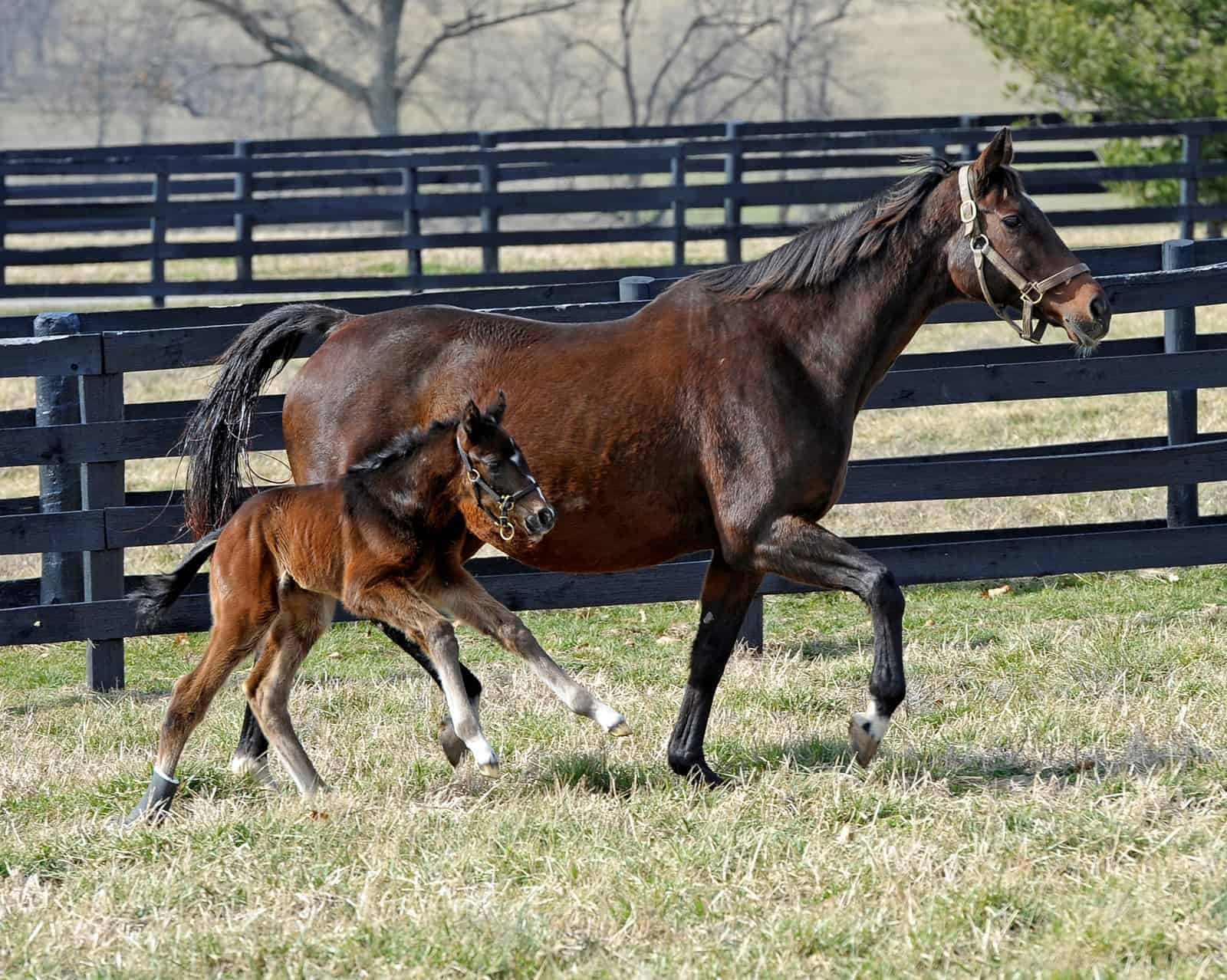 Each year the American Association of Equine Practitioners convention kicks off with a rapid-fire run through some of the most important surgery, medicine, and reproduction studies of the previous 12 months. The 2018 edition, held at the Dec. 1-5 meeting in San Francisco, California, featured Regina Turner, VMD, PhD, Dipl. ACT, chief of the Section of Reproduction and Behavior at the University of Pennsylvania’s New Bolton Center, in Kennett Square, presenting reproduction research. Here were her top selections:

In this study researchers from Florida, Georgia, and Kentucky evaluated the pharmacokinetics (how drugs are processed and maintained in the body) of the broad-spectrum antibiotic ceftiofur sodium (Naxcel) in pregnant mares to see if this drug might be an effective placentitis (inflammation of the placenta) treatment.

“It makes great intuitive sense because most placentitis cases are caused by Streptococcus equi subspecies zooepidemicus, and ceftiofur sodium is very effective against (that pathogen),” said Turner.

Their take-home? Ceftiofur sodium does not cross the fetal membranes and is not a good option for treating placentitis, said Turner, adding that it’s still useful for treating Streptococcus infections in other body regions in both pregnant and nonpregnant mares (the drug is labeled in horses for use against respiratory infections). Additionally, she said, it is useful for treating nonpregnant mares with endometritis (inflammation of the inner lining of the uterus) caused by Streptococcus, because it’s been shown to reach good levels in the uterine lining.

To guide metritis (uterine wall inflammation) treatment recommendations in horses, University of Georgia researchers evaluated the most frequent causative agents, their antimicrobial susceptibility, and the prevalence of multidrug resistance (MDR) in such cases. This is important because these mares are often very sick, so treatment must begin immediately—usually days before test results identifying the bacteria species are available.

In their retrospective study the researchers looked at more than 80 organisms found on uterine cultures of 45 postpartum mares with metritis. They found that 62% of mares harbored more than one bacterial species, with the most common ones being Escherichia coli, S. zooepidemicus, and other Streptococcus spp.

“These organisms represent both Gram-negative and Gram-positive species,” said Turner.  Gram-negative and gram-positive organisms are often sensitive to different classes of antimicrobials. Therefore, the presence of both bacteria types in the uterus is concerning because choosing a single antimicrobial empirically (without knowing the results of culture and antimicrobial sensitivity testing) is likely to be ineffective against at least one or the other, she said.

As for treatment, the researchers found that the antimicrobial trimethoprim/sulfonamide (TMS) was not a good option, having less than 49% efficacy against the most commonly isolated organisms. Gentamicin with penicillin was more effective at 65%. While the study authors concluded that a combination of penicillin and amikacin or enrofloxacin might be preferable to penicillin and gentamicin, Turner said these choices might be cost-prohibitive or impractical.

Lastly, the team found MDR in around 60% of organisms and in 85% of Gram-negative bacteria.

“This is making me feel very worried, as it is pointing to a significant increase in bacterial drug resistance,” said Turner.

Turner compared two studies in which researchers evaluated noninvasive treatments for subfertile mares suspected of having blocked oviducts. Historically, veterinarians have had to perform laparoscopy to treat suspected oviduct blockages. Although minimally invasive, this surgical procedure can cost upward of $4,000.

In the first study Japanese researchers evaluated the efficacy of hysteroscopic hydrotubation of the oviduct, a procedure in which the veterinarian passes an endoscope into the uterus and, through it, threads a stylet (a slender probe) and tubing to the tip of the uterine horn and into the oviduct. He or she administers sterile saline through this tube to mechanically flush out any blockage. Of the 28 subfertile mares suspected of having blocked oviducts that underwent this procedure in this retrospective study, 26 (93%) became pregnant after treatment, suggesting that this technique is an effective method for clearing blockages, said Turner.

In the second study researchers from Brazil tested an even easier approach: topical administration of the drug misoprostol (a form of prostaglandin E that can cause the oviduct to dilate and increase oviduct contractions, which move ova down the tubes to the uterus) through a flexible insemination pipette. After inserting the pipette through the cervix into the uterus, the veterinarian manually guides it transrectally to the uterine horn tip adjacent to the oviduct opening. Then, he or she injects misoprostol through the pipette onto the opening.

“The idea is that the misoprostol will pass into the oviduct, where it will cause the oviduct to contract, thus forcing the blockage out,” said Turner. The researchers reported a 73% pregnancy rate in the 22 treated mares.

“Now we have two noninvasive, less expensive, apparently effective treatments. This is a big jump forward in ease of treatment,” said Turner. “While (hysteroscopic hydrotubation) is more difficult and expensive (around $800 to $1,000, compared to misoprostol’s approximately $200 price tag), it gives you the bonus of being able to see inside the uterus and evaluate the health of the uterine lining in these infertile mares.”

Mares’ natural length of estrus can be variable, ranging from three to 7 days. When we manipulate the estrous cycle with prostaglandin (short-cycling), the variation can be even more extreme. Researchers have previously shown that longer estrous periods are associated with increased pregnancy rates, but it was unknown whether this was due to an effect on the oocyte, the oviduct, the uterus, or some combination of these.

Endometrial edema (an increase in fluid within the tissues lining the uterus) is a hallmark of estrus and a normal response to high levels of circulating estrogen and low levels of progesterone. Using uterine edema as a marker for an estrogen-dominated uterine environment, these researchers looked at data on 231 recipient mares and found that those with significant uterine edema for at least three days prior to ovulating had an 83% pregnancy rate following embryo transfer. Mares with fewer than three days of edema had a 64% pregnancy rate, and those with none had a 50% rate. The authors concluded that adequate estrogen priming during estrus is key to uterine receptivity and embryo survival.

“Mares that ovulate quickly and show the development of little to no uterine edema prior to ovulation are less likely to become pregnant, and this is due, at least in part, to an effect on the uterine environment,” said Turner.

Large colon volvulus (twisting) is one of the most common postpartum problems in mares and is a surgical emergency, said Turner. To measure its future impact, researchers from Colorado, Kentucky, and Michigan looked at the long-term reproductive careers of broodmares that underwent surgery to correct this type of colic. In their retrospective study they found that 82% of mares bred post-surgery produced at least one foal. Forty-seven percent foaled in the year following volvulus surgery (so they were successfully bred the same year as the surgery). Younger mares (ages 3 to 11) produced more foals after surgery than did older mares, but Turner noted that foal production was no different than that seen in age-matched mares that did not have surgery.

The authors concluded that large colon volvulus surgery does not affect broodmare careers. “Age at the time of surgery and not the surgery itself has an effect on how long these mares will continue to produce foals,” said Turner. “Base a decision to go to surgery on a mare’s age and value and not on a concern that the surgery itself will shorten her reproductive career.” Beautiful 2 year old Clara is now available for adoption by an experienced horseman/women who wants to bring up a…
08/12/2022
Total views: 290