The Nose Knows: What Equine Nasal Discharge Tells Us

Any nasal drainage can be an important indicator of a horse’s health and can even herald an emergency. We’ll take you through six snotty nose scenarios and possible causes. Causes of snotty noses can range from benign to catastrophic

It starts with a drip: a bit of clear nasal discharge apparent as you wipe one of your horse’s nostrils while tacking up. It’s chilly out and, quite honestly, your own nose is running a bit, so you think it’s probably nothing.

Most likely, it’s not anything to be concerned about. But even with something as seemingly simple as a horse with a snotty nose, it’s important to pay attention and know how problematic the discharge is, the possible causes behind it, and when to call your veterinarian. Nasal drainage can be due to something as basic as a dusty arena to a life-threatening emergency. Many other causes fall between the two extremes.

The mucous membranes lining your horse’s nasal passages are sensitive, just like yours. Anything, infectious or not, that aggravates them or causes inflammation can lead to production of additional mucus or fluid and the telltale runny nose.

In this article we’ll look at six snotty scenarios and explore the possible causes. Some are fairly benign, while others require calling a veterinarian to resolve the issue and protect nearby horses. Still, some can be life-threatening.

When faced with a snotty nose, it’s important for a horse owner or caregiver to make certain observations before calling the veterinarian. First, it’s important to characterize the discharge based on:

Understanding common terms a veterinarian might use to describe discharge can help owners and caretakers communicate more effectively, as well:

“Most snotty noses are bilateral but, as you go down the decision tree, that’s the first decision to be made because one-sided helps you locate it anatomically,” says Melissa Mazan, DVM, Dipl. ACVIM, professor of internal medicine, equine respiratory system, and lung function at Tufts University’s Cummings School of Veterinary Medicine, in North Grafton, Massachusetts.

Additional observations to note and share with your veterinarian include:

The most common causes of snotty noses are noninfectious, says Mazan. Let’s take a closer look at our six scenarios.

Scenario 1:  The horse has a watery or white nasal discharge and shows no other clinical signs.

Horses with a bilateral watery or mucoid discharge could be reacting to environmental irritants (such as dust) or suffering from equine asthma or allergies.

(Horses with asthma) usually still have a bright eye, they want to eat. They’re pretty happy to go out for a ride. They don’t look sick.

Mazan says horses with asthma still seem fairly healthy unless they are severely affected, despite the presence of discharge. “They usually still have a bright eye, they want to eat,” she says. “They’re pretty happy to go out for a ride. They don’t look sick.”

Kara Lascola, DVM, MS, Dipl. ACVIM-LA, CVA, associate professor of equine internal medicine at Auburn University’s College of Veterinary Medicine, in Alabama, says in this scenario veterinarians might tell owners just to keep an eye on the horse if he otherwise appears healthy. They should also recommend the owner monitor the horse for a fever or other signs of illness for a few days. 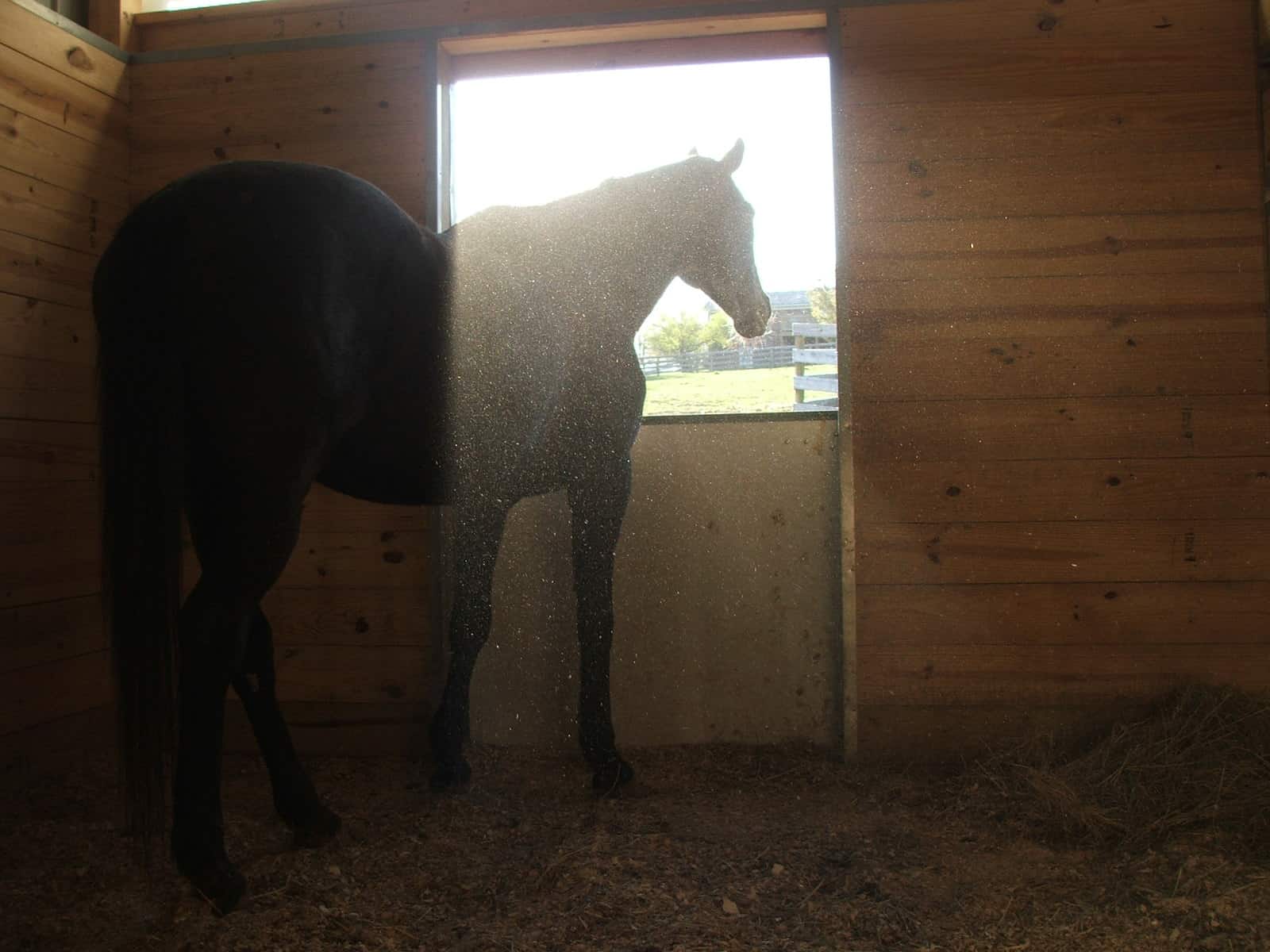 Scenario 2:  The horse has a lot of thick, yellow discharge coming out of both nostrils and seems less active than normal.

Horses with thick, yellow bilateral discharge and other signs of illness might be suffering from a viral or bacterial infection.

A viral infection often starts with a serous discharge that quickly changes to a thicker yellow or yellow-green.

“If it’s a horse that is showing any other signs of respiratory disease, such as coughing, breathing harder (more labored), is off its feed, has a fever, or there’s an odd color or an irregular color to that discharge, you definitely want to have it looked at,” says Lascola. “If it’s a severe pneumonia (which is most commonly caused by bacteria and less commonly by viruses or fungi), when you watch them breathe they might have an increased respiratory rate.”

Another sign that a horse could have an infection, whether mild or severe: He might be hanging out toward the back of his stall and doesn’t want to interact with people, says Mazan.

The most common viral causes of snotty noses are influenza, rhinitis A and B, and rhinopneumonitis caused by equine herpesviruses-1 and -4. Equine viral arteritis virus (EVA) is a less common cause.

“There’s also equine herpesvirus-2, which is ubiquitous,” says Mazan. “We used to think it was unimportant, but now we know it’s a fairly important cause of snotty nose, especially in younger horses. There’s no vaccine for that or for EHV-5, which again can cause a relatively low-grade viral disease in younger horses.”

Lascola warns that horses with viruses can be at risk for complications. “It does take time for the airways to heal after a viral infection, and so they are at increased risk during that time for a secondary bacterial infection, especially if they are being transported or being worked.”

Among the most common bacterial causes of nasal discharge are Streptococcus equi subsp. zooepidemicus, which can lead to pneumonia, and S. equi subsp. equi, which produces strangles.

Often horses with strangles don’t develop nasal discharge until later in the disease process, once internal abscesses rupture. Then, a purulent discharge can drain from the guttural pouches (more on these coming up) into the nasal passages and out bilaterally through the nose, says Lascola.

Yet another cause of this type of discharge, sinusitis (inflammation of the sinus tissue) can be due to a bacterial infection or dental disease, such as a tooth root infection.

Scenario 3:  The horse has a flowing bloody nasal discharge.

Any horse with bright-red blood in his nasal discharge should be seen by a veterinarian immediately, says Mazan. Unless the horse just finished strenuous exercise resulting in exercise-induced pulmonary hemorrhage (EIPH, or “bleeding”), a fungal or bacterial infection within the guttural pouches could be to blame.

Mazan says fungal infections can reside on this internal carotid artery. “When you scope the guttural pouches, you can watch those carotid arteries beating,” says Mazan. “You’re only four cell layers away from disaster. If the fungal infection erodes that artery, you can bleed out in a big hurry. It could be minutes.”

In such a situation, a trickle of a nose bleed becomes a gusher. And if an owner misses early signs of bloody discharge, the results are devastating; a horse gushing blood can bleed out in minutes.

Fungal infection discharges can be clear to yellowish to honey-colored, are usually (but not always) unilateral, and can smell bad.

Additional signs of a fungal infection can include cranial nerve abnormalities, such as the horse holding or swinging his head oddly to one side due to loss of innervation, swallowing issues, and signs of Horner’s syndrome (e.g., drooping eyelids, sunken eyes, a raised or swollen third eyelid, constricted pupils, abnormal sweating on the affected side).

Other causes of unilateral bloody nasal discharge include sinus cysts or foreign bodies (such as a stick) lodged in a nostril.

If a horse with a snotty nose seems sick, Kara Lascola, DVM, MS, Dipl. ACVIM-LA, CVA, associate professor of equine internal medicine at Auburn University’s College of Veterinary Medicine, in Alabama, suggests isolating him; minimizing the number of people that care for him; and requiring all caretakers to wear gloves. This helps reduce disease spread.

Also recognize that a horse might be infected, contagious, and not yet showing clinical signs of disease. For this reason, quarantine and other biosecurity measures can help prevent disease spread, especially if horses are moving on and off the farm. “Separate those groups so a new horse coming in is kept in a separate area for a couple weeks,” says Lascola. “Just make sure nothing pops up in that first couple of weeks with that horse before it’s introduced to the rest of the community.”

“Horses that are young and travel and mingle with horses a lot are more likely to get a viral disease,” says Melissa Mazan, DVM, Dipl. ACVIM, professor of internal medicine, equine respiratory system, and lung function at Tufts University’s Cummings School of Veterinary Medicine, in North Grafton, Massachusetts.

This is where biosecurity measures (TheHorse.com/BiosecurityTips) are particularly important.

Scenario 4:  The horse has unilateral bloody discharge, but it is dark rust in color and mixed with lots of mucus.

A horse with rust-colored bloody discharge—indicating it’s not from a fresh bleeding source—could be dealing with an ethmoid hematoma. This benign fragile vascular mass (made up of blood vessels) can grow into the nasal passages or the paranasal sinuses from the ethmoid, which is a normal vascular structure at the top of the paranasal sinuses. They resemble cancerous tumors. The resulting bloody discharge is usually low-grade, intermittent, spontaneous, and unilateral, and sometimes fetid.

“Owners might also notice a noise that’s associated with it if it’s big enough that air flow is obstructed,” says Lascola. “And then you might see facial swelling or even headshaking in some horses.”

Treatment usually involves injecting the chemical formalin, which reduces the size of the lesion, or surgical removal, but recurrence is common.

Scenario 5:  The horse has a creamlike discharge from one nostril.

Considered less severe then our third scenario, a creamy discharge from one nostril could result from a bacterial infection of the guttural pouch called guttural pouch empyema. In this condition inflammation and pus build in the pouches. Horses also might have a fever or seem depressed. It could also develop secondary to strangles, which would probably already be evident to the owner.

Scenario 6:  The horse has lots of foamy and chunky nasal discharge from both nostrils.

Mazan says profound nasal discharge like this could result from an esophageal obstruction, also called choke. The chunky bits dripping from the nostrils could be food coming back up.

In horses with choke, food typically blocks the esophagus, although it can less commonly block the windpipe. Affected horses might cough and drool, as well. While a horse can still breathe with a blocked esophagus, a veterinarian must resolve the issue to prevent ­complications. For more on choke, visit TheHorse.com/chokearticles.

Rarely, in severe colics horse owners might see a foamy discharge with chunks of food as reflux. However, this is usually accompanied by abdominal discomfort and distention.

These scenarios illustrate the wide range of causes and types of snotty noses. It’s important to recognize that any nasal drainage can be an important indicator of a horse’s health and can even herald an emergency; pay close attention to the signs, and be prepared to relay them to your veterinarian.

If you are interested in adopting this horse, please submit an ‘Adoption Inquiry’ via our website: Allaboutequine dot org. No…
07/01/2021
Total views: 3891