The Scary Thing About Rabies

Rabies infection can be insidious and vague, posing a threat to you, your horses, and your pets without you even realizing it. 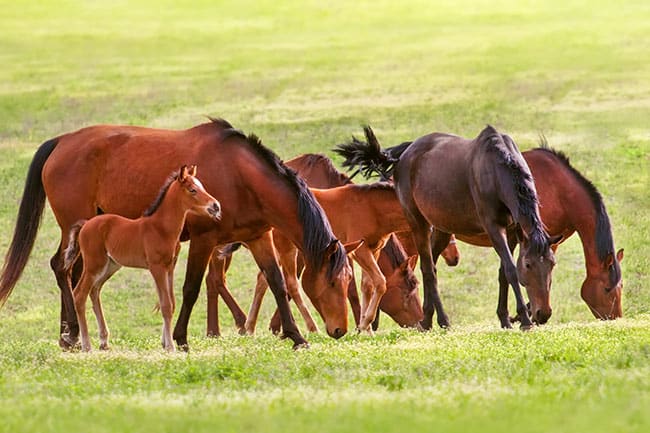 Infection can be insidious and vague, posing a threat to you, your horses, and your pets without you even realizing it

Picture a group of equine veterinary students, all of whom are naturally attracted to a pasture full of cute foals and have been observing them vigilantly. They’ve noticed that a previously healthy baby in their university horse breeding program herd has started acting “off.”

The students bring the mare and foal in question up to the barn to treat what they suspect is a respiratory or viral infection. However, the foal quickly progresses to showing neurologic signs and is biting his tongue. About the same time, staff discover a fox den in the pasture. By now, the suspected diagnosis is rabies, and the foal is euthanized. He tests positive post-mortem, and more than a dozen exposed veterinary students, staff, and faculty must undergo a preventive rabies shot cycle.

Betsy Greene, MS, PhD, professor and equine extension specialist at the University of Arizona’s School of Animal and Comparative Biomedical Sciences, in Tucson, recalls this incident, which took place several years ago at another university. “It was a familiar scenario for early rabies signs in horses,” she says, “Simply, ‘Somethin’ ain’t right.’ ”

If the students and staff at a veterinary teaching hospital—who arguably are on alert for subtle clinical signs and potential exposures all the time—can expose themselves to this always-fatal zoonotic (passed between humans and animals) disease, think how easy it is for a horse owner to do the same.

If all your pets and every single animal you come into contact with are vaccinated according to veterinary guidelines, you can stop reading now. But if not (and seriously, who knows the vaccination status of friends’—let alone strangers’—animals?), you need to know how rabies spreads, how to recognize it, how you can prevent it, and what to do if you suspect it. Read on to find out what to do and what not to do to keep yourself and your horses safe from rabies. Infected (rabid) animals transmit the rabies virus via saliva when they bite or, much less commonly, when their saliva gets introduced to uninfected mammals through skin wounds or via mucous membranes such as the eyes, mouth, or nose. The rabies virus, Rhabdoviridae lyssavirus, then travels through the peripheral nervous system to the brain, where it attacks the central nervous system.

Although rabies isn’t widely found among horses in the United States, veterinarians diagnose about 40 cases per year. And, says Greene, the potential risk of human exposure from even one infected horse is significant. “The nonspecific early signs of infection can delay correct diagnosis and potentially expose handlers, caretakers, owners, veterinarians, veterinary technicians, and anyone else who handles the animal,” she says. “Even though the chance of your horse contracting rabies is small, the implications of a rabies infection that occurs in your barn are significant.”

“Early signs in horses can be easy to mistake for mild colic or (unexplained) lameness,” Greene says. “Even the advanced signs in horses can be similar to more common diseases such as Eastern or Western equine encephalitis, West Nile virus, or equine protozoal myeloencephalitis. If other neurologic diseases have been ruled out and the horse has an unknown vaccination status and/or suspected exposure to a rabid animal, rabies should be considered as a possibility.”

Other early signs include: Because rabies signs are similar to those of other diseases and because veterinarians can only confirm a diagnosis post-mortem, Greene says a surprising number of people can be exposed before the disease is confirmed or even ­considered. This was the case with the students in the opening example. “Any human suspected of exposure should be seen immediately by a physician for post-exposure treatment protocol,” she adds.

The American Association of Equine Practitioners (AAEP) lists the rabies vaccine as a core vaccination for all equids. Most state health departments require that licensed veterinarians administer rabies vaccinations and record them in a horse’s vaccination history (in the event of exposure, this will dictate whether they consider a horse appropriately vaccinated). The AAEP recommends vaccinating the following classes of horses accordingly.

The word rabies commonly invokes mental images of a snarling, vicious animal, as in the movie “Old Yeller.” Yet two forms of rabies exist: furious and paralytic.

Greene says animals with furious rabies display the more aggressive signs, becoming agitated and irritable. Wild animals might lose their fear of humans, and normally nocturnal animals might venture out during the day. Normally gen­tle animals might charge or attack their human handlers, which is especially dan­gerous if they are horses or cattle, whose size alone can cause injury or death. And rabid animals might injure themselves further, especially at the bite site.

Paralytic (also known as dumb or stuporous) rabies, she says, involves progressive paralysis. “The animal may become depressed, but there are few other behavioral changes,” says Greene. “Ataxia, inability to swallow, and excessive drool­ing may be noted initially, followed by pa­ralysis, which leads to coma and death.”

How to Prevent Infection

Because most horses spend at least part of their time outdoors, they innately come in contact with wildlife. But taking a few simple precautions can reduce their risk of rabies infection:

You might have to take additional pre­ventive steps if you’re shipping your horse outside the United States. Each country has its own vaccination and quarantine regulations (which your vet can help you navigate), says Susan Moore, PhD, director of the Kansas State Veterinary Diagnostic Laboratory’s Rabies Lab, in Manhattan.

If you suspect an infected animal has bitten your horse, your veterinarian and/or public health officials will guide you in what to do. The AAEP says horses that have been vaccinated with one of the USDA-approved vaccines should be re­vaccinated immediately and quarantined (as directed by public health officials) for 45 days to observe whether clinical rabies signs develop.

Public health officials will dictate the procedure for horses that haven’t been vaccinated previously or whose vaccina­tion histories are unknown. Options might include isolation and immediate post-exposure immunization or euthanasia.

If the horse’s owner is unwilling to eu­thanize him, the AAEP recommends he be quarantined (at the owner’s expense) un­der veterinary supervision for six months, if the appropriate health officials concur. If during this period the horse begins to exhibit signs of rabies infection, he will most likely be euthanized, says Greene.

The only way to diagnose infection is to euthanize the suspect animal for testing. “Since rabies is reportable and zoonotic, a veterinarian in (your state) would need preapproval for Public Health Services to ship the specimen for testing,” Greene says. Depending on where the testing is done, it take about two hours to complete and costs approximately $75-150.

People who have been exposed to rabies must receive a series of injections known as post-exposure prophylaxis (PEP). Public health officials and a physician determine the best treatment based on multiple factors. This has proven to be highly effective if started soon after exposure. Once clinical signs of rabies appear in human patients, the disease is almost always fatal.

Rabies is a scary disease because it can manifest in many nonspecific ways and is always fatal within a few days of clinical signs becoming apparent. It’s common sense to avoid wildlife that’s acting strangely, but jumping to the aid of any horse, regardless of possible health risks, can be tempting for horse owners. Be cautious, and remember that rabies is easily preventable if you have your horse vaccinated each year according to AAEP recommendations, as well as your com­panion animals and livestock.

Beautiful 2 year old Clara is now available for adoption by an experienced horseman/women who wants to bring up a…
08/12/2022
Total views: 337