Crooked Horse Under Saddle? A Single Bell Boot Can Help

Placing a boot on a horse’s weaker leg can use proprioception to help him build muscle force and reverse asymmetry, a study finds. 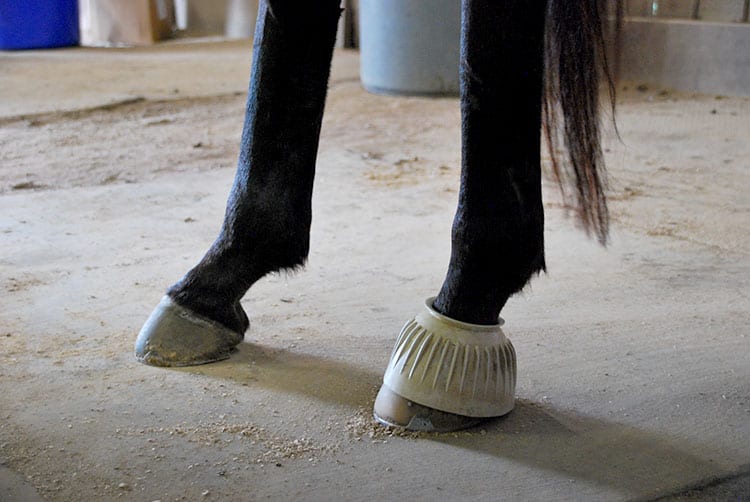 All horses have some degree of asymmetry. All it might take to improve a slight asymmetry, however, is reminding the horse that the weaker leg is actually there, said Danish researchers.

“If you place something that is loose around the fetlock—and it doesn’t have to weigh much—then the horse feels it and begins to engage that limb more than it was doing before,” said Adrian P. Harrison, PhD, of the Faculty of Health & Medical Sciences, Copenhagen University in Denmark.

That “something” could be a simple polyurethane bell boot, Harrison said. By strapping a boot loosely above the pastern of a weaker leg occasionally during normal training, riders can help their horses build muscle force (the process in which skeletal muscle, in response to neural stimuli, converts metabolic energy into active force that pulls on the bones via connective tissue) in that leg. That correction could help resolve muscular imbalances related to having a dominant limb or old injuries.

“This can be very useful after an injury when a horse has got used to a limb hurting,” Harrison said. “Once the limb has recovered, the horse needs to learn to use it again and realize that, in doing so, it will not be associated with pain or discomfort.”

The magic behind this simple technique is the concept of proprioception. Proprioception refers to an individual’s awareness of his or her body parts—knowing or remembering where they are and what they’re doing at any moment. By placing a comfortable, lightweight object at the bottom of the horse’s leg, the horse “remembers” the leg is there and uses it more.

However, the Danish team has benefited from new biotechnology allowing them to visualize exactly what’s happening to the muscle and to confirm that the proprioception is working to increase muscle activity. Using acoustic myography (AMG, which measures how muscle and ligament fibers move), scientists can measure how many muscle fibers and how much muscle power the central nervous system summons when a muscle contracts.

“In many ways what we have done is merely a confirmation of what Hilary Clayton did several years ago, but extending it to actual muscle measurements,” Harrison said.

In their study, Harrison and his fellow researchers followed eight amateur dressage horses that were sound but had slightly weak left hind limbs compared to the right, as seen through AMG measurements while longing in a left circle. They instructed the horses’ usual riders to place an 80-gram (cob size) polyurethane bell boot on their horse’s weaker hind limb during normal workouts for 60 minutes every three days, for six weeks. At the end of the six weeks, AMG measurements revealed that the asymmetries had resolved, with no statistical differences in measurements between the right and left limbs.

“They have a leg they prefer to start walking or trotting with first,” he said. “Often, this is reinforced by mounting from the same side of a horse, training, or exercising in the same direction. Most of the time this preference to use one side more than another is very small, leading to a very slight imbalance, but that’s often enough for a good rider to feel. What is not known is whether such an imbalance can develop into more serious issues (e.g., lameness, crookedness) if it is not checked. This is research we would like to do using acoustic myography.”

In the meantime, Harrison said he recommends riders vary their workouts in both terrain and direction and verify that their tack fits well.

If you're interested in adopting this horse, please submit an ‘Adoption Inquiry’ via our website: Allaboutequine dot org. No texts…
07/01/2021
Total views: 2111