Burning Up: Photosensitization and Sunburn in Horses

Some horses are vulnerable to sun damage. Here’s what to watch for and how to protect against it. 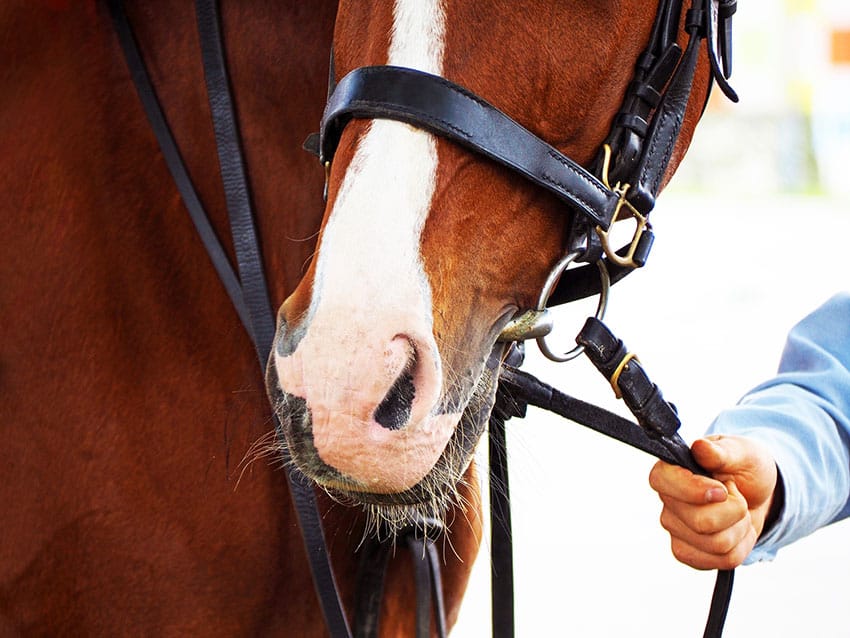 Some horses are vulnerable to sun damage—even more so after ingesting or touching certain plants. Here’s what to watch for and how to protect against it.

Chrome. It enchants horse owners and judges alike, turning heads in the barn and in the competition arena. Many horsemen covet and some even breed for eye-catching white legs and facial markings, and fans ooh and ahh about it from the stands. The flip side to flashy, however, is that the underlying unpigmented skin is vulnerable to the sun’s ultraviolet (UV) rays—and burn it does, becoming red, sensitive, and peeling. But these horses’ reactions can become even more serious than sunburn, involving localized swelling, crusty scabs, oozing blisters, and areas of severe inflammation. These are all signs of photosensitivity, which can be brought on by a variety of exposures.

Some plants (St. John’s Wort, buckwheat, perennial ryegrass, whiteheads) can cause skin problems when horses ingest or even touch them. Photosensitivity is a severe dermatitis (skin inflammation) that occurs when certain plant pigments damage nonpigmented skin cells with sun exposure. The pigments get absorbed in the gut before passing to the skin via the circulatory system.

Stephen White, DVM, Dipl. ACVD, professor and chief of service in dermatology at the University of California’s School of Veterinary Medicine, in Davis, explains that “photosensitivity in the horse is usually caused by a photodynamic (inducing or intensifying a toxic reaction to light) agent … in or on the skin that absorbs energy from light and transfers it to skin cells, which ultimately destroys them.” This is known as photosensitivity Type I, sometimes called primary photosensitivity.

“The activating light is generally in the ultraviolet A range (320-400 nanometers),” he continues. “Melanin (pigment) in the skin screens ultraviolet light, thereby limiting photosensitivity reactions to white and light-colored areas of the horse’s body.”

Indeed, hair and melanin tend to block passage of light, and hairless areas of skin, in particular those around the muzzle, ears, eyes, face, udder, beneath the tail, and on white legs and the coronary band are most susceptible to UV exposure. “Photosensitization in pigmented skin,” White reports, “is not usually the case unless there is a ‘lap-over’ effect from a nearby un- or lightly pigmented area.”

As one might expect with horses’ grazing habits, the inciting cause of skin damage in most photosensitization cases is plant consumption. However, “there is thought that certain plants such as clover may cause photosensitization by contact if they are moist, as might occur in a rainy season,” says White.

Another form of photosensitivity occurs after toxic plants damage the liver, particularly those containing pyrrolizidine alkaloids (PAs). Some plants that cause primary photosensitivity are also known to induce liver damage, but PAs exert more profound toxic effects. The horse’s liver metabolizes the alkaloids to highly reactive compounds called pyrroles, which are toxic to liver cells as well as kidney and lung tissue. Liver cell and/or bile duct injury disrupts the waste organ’s ability to excrete phylloerythrin, which is produced during chlorophyll digestion. Usually, horses excrete phylloerythrin through bile and pass it in the feces without any interaction with skin tissues. Yet, with liver damage, phylloerythrin persists in the body and accumulates in the skin to cause photosensitivity. Upon exposure to sunlight, areas of nonpigmented skin erupt in blisters and sores.

Only 25% of horses with nonpigmented skin and liver dysfunction will show visible signs of skin damage from photosensitization.
Dr. Stephen White

Signs of chronic liver disease from PA poisoning might not appear for several weeks to several months. “Only 25% of horses with nonpigmented skin and liver dysfunction will show visible signs of skin damage from photosensitization, such as swelling, cracking, and eventually sloughing of the damaged skin,” says White. So even if only one horse in your herd has signs of photosensitivity, your veterinarian should still examine all the horses.

Other signs of liver damage include poor body condition, loss of appetite, lethargy, jaundice (seen as yellow-tinged mucous membranes), constipation, or diarrhea. Once a horse demonstrates signs of liver disease from PA toxicity, including photosensitivity, the extent of underlying liver damage could make recovery difficult. Eventually, signs of hepatoencephalopathy (loss of brain function attributable to liver disease) develop—head-pressing, yawning, aimless wandering, and aggressive or frenzied behavior. By then, liver damage is usually so profound that the horse will likely die.

Often, the veterinarian will perform a liver biopsy on the horse presenting with signs of liver disease to come to a PA toxicity diagnosis. Then the hunt for the responsible plant begins, with the help of an expert in plant identification. Examples of these liver-damaging plants are listed in the chart below. Pyrrolizidine alkaloid toxicity can occur anytime a horse ingests enough of the alkaloid, regardless of whether it is in freshly grazed plants or in plants inadvertently baled in hay, says White. Usually, liver failure from PA toxicity is a cumulative effect of a horse ingesting at least 2% of its body weight of the alkaloid-containing plants.

Tony Knight, BVSc, MS, Dipl. ACVIM, professor emeritus at Colorado State University’s College of Veterinary Medicine & Biomedical Sciences, in Fort Collins, and author of A Guide to Plant Poisoning of Animals in North America, says, “PA poisoning is generally the result of prolonged ingestion of the alkaloids. However, if a horse were to eat excessive amounts of the alkaloids in a short period there could be acute liver damage. Although this is unlikely, acute poisoning could occur if a horse was put in a pasture with nothing to eat but Senecio and/or Crotalaria, for example.”

Horses turned out on poor, weedy, overgrazed and/or drought-ridden pastures are most at risk. Although PA-containing plants are bitter and not very palatable, horses will eat them if they
are hungry.

“Pyrrolizidine alkaloid poisoning can even occur in winter if hay is contaminated with PA-containing plants such as Cynoglossum, Senecio, Echium,” Knight says. “The PA levels are reduced in the dry plants, but are still present in sufficient amounts to be toxic if fed over a period of weeks. PA levels remain in dried plants for at least several months. I have seen PA poisoning in April in horses fed hay containing Cynoglossum that was baled the previous summer.”

If pasture or hay is the inciting cause of photosensitization, you will likely see more than one horse in the herd affected.

Primary liver disease also creates conditions for the development of secondary photosensitization, mainly because the liver can’t excrete phylloerythrin efficiently. Any number of conditions can cause liver disease, ranging from viral or bacterial infections to aflatoxin exposure from moldy grain to drug or iron toxicity.

Photosensitization of Unknown Cause

Another form of photosensitization can occur from ingesting or contacting alfalfa or alsike or white clover. Scientists aren’t clear on exactly what causes the toxicity, but they believe it might be due to horses consuming alsike clover on which mycotoxin (which certain fungi can produce) has formed. The issue usually resolves on its own when you remove the horse from affected pastures.

Finally, of course simple sunburn—overexposure to sunlight—can damage the skin. Breeds such as Paints, Appaloosas, or any horse with nonpigmented, pink skin is susceptible to sunburn even without ingesting or contacting photodynamic plants. Fortunately, this problem is easy to solve with some good management practices that limit the horse’s exposure to sunlight.

For face, eye, and ear protection, equip your horse with a fly mask that covers the ears as well as most of the muzzle with an extended mesh nosepiece. You can also buy a fly sheet, which, if made from UV-resistant materials, can reportedly block up to 70% of UV radiation from the horse’s back and torso. Leggings made of similar material help protect white legs from both sun and insects. (For a simple, inexpensive approach, you can secure tube socks, extending from the top of the cannon bones to the coronet band, with Elastikon tape.) White also suggests keeping sunburn-prone horses out of the sun, especially between peak daylight hours of 10 a.m. and 3 p.m.

Also, owners can apply sunblock creams, particularly on small areas. Zinc oxide cream, such as the diaper rash treatment Desitin, blocks UV radiation and has no harmful effects on horse skin, although it is sticky and picks up dirt easily. Human sunscreen products can be useful, but White suggests avoiding PABA (para-aminobenzoic acid)-containing products, as some horses are sensitive to this chemical and might develop a rash. No matter what topical sunscreen you apply, if you apply it to the face, some or all of it will wash off if the horse dunks his head in the water tank. You might need to reapply frequently. In all cases, avoid using any sun-blocking chemicals around a horse’s eyes.

One particularly controversial sun-protection strategy is to tattoo small areas of pink skin that are very sensitive to the sun. However, this method is not likely effective. “The damage from UV light is directed at the epidermis, whereas a biopsy of a tattooed area reveals that the tattoo pigment is found in the dermis,” says White, which is the underlying skin layer. “If the tattoo pigment stayed in the epidermis, it would rather quickly shed with the epidermal cells during the normal process of skin replenishment.” So, the permanence of the tattoo circumvents it being effective, and vice versa.

Whether due to direct exposure to the sun or touching or ingesting toxic photodynamic plants, horses’ nonpigmented skin is susceptible to UV damage. To prevent burns, protect your horse’s skin from the sun’s rays and identify and remove photodynamic pasture plants that could cause severe liver damage and photosensitization. Talk to your veterinarian about the best ways to manage your horses with pink skin or white markings so you can take practical countermeasures in advance of problems developing.