Is your horse a picky eater? Learn about reasons your horse might turn his nose up at his meals and what you can do about it. Helen Yakin-Palmer refers to her 13-year-old dun mare Cera as “the most finicky eater on earth.” That’s because finding a diet that’s nutritious enough to maintain her body weight—yet tempts her palate—is usually a zero-sum game.

“Sometimes she’ll eat something for one or two weeks, and then she won’t like it anymore and refuses to eat it, and sometimes if she doesn’t like the way something smells, she won’t eat it,” says Yakin-Palmer, of Myakka City, Florida. “Then there are some things—such as her supplements—that she won’t eat, period. It’s an ongoing challenge.”

Cera is not alone. Horses have specific preferences for the tastes, textures, and smells of the things they ingest. Sometimes those preferences are rooted in physical conditions, sometimes they’re not. So before you can figure out how to feed a finicky horse, you must determine why that horse is finicky in the first place, says equine nutrition consultant Clair Thunes, PhD, who owns Summit Equine Nutrition, in Gilbert, Arizona.

“If a horse isn’t eating, you have to figure out what the underlying issue is,” she says. “Is it caused by ulcers, which can lead a horse to go off grain, or possibly hindgut-related discomfort, which may result in them not eating hay? Is it a dental issue that is affecting the horse’s ability to chew?”

These are questions Thunes says she always considers when working with finicky eaters. “Whatever it is, you have to eliminate the possibility of a physical condition first,” she says.

Meanwhile, owners of healthy horses have a host of other things to consider, including whether the feed itself is ­causing the issue. In fact, something as subtle as a change in hay texture can affect palatability, even if the hay comes from the same provider. Thunes explains that hay harvested later in its growth cycle is more mature and, so, woodier with a higher stem content. Some horses prefer softer hay, while others relish more stem.

“Some horses don’t like grass hay at all, but if the horses are eating some of the grass hay, notice what part of the hay they are not eating,” she says. “It amazes me the way they can pick through the hay to eat what they want and leave the rest.”

Picky horses do the same with what they find in their feed buckets, she says. When it comes to grain, some horses prefer pelleted feed, while some like a textured feed better. Cera’s fickle palate wavered between the two, so Yakin-­Palmer tried a third option. On the advice of a local equine nutritionist, she offered Cera a puffed grain product in the off chance the mare would appreciate the feed’s texture and flavor. But Cera flat-out refused. 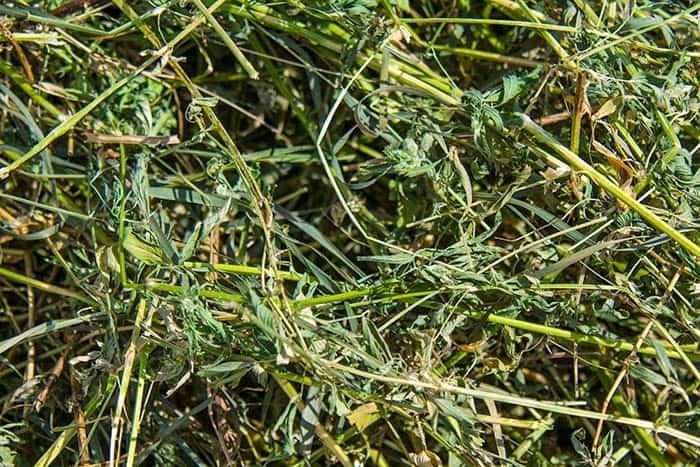 The latter grain choice never made it past Cera’s nose and, among finicky horses, says Thunes, that’s not unusual.

“If a horse stops 6 inches into his feed bucket, it’s possible that he does not like the smell,” she says.

As such, many feed manufacturers add aromas and flavors to feed products to entice horses. Jesse Francis, MS, a researcher and doctoral student in ­Southern Illinois University’s (SIU) Department of Animal Science Food & Nutrition, in Carbondale, has, for the past year, been researching the taste and olfactory preferences of 10 horses from SIU’s herd to determine whether horses really do have certain flavor and scent preferences. She chose the animals involved in the research project based on their willingness to consume a pair of diets: one consisting of commercially prepared pelleted feed sans flavor or olfactory enhancers and another modified with an oil-based flavoring.

“Some horses will eat anything—if you leave a bucket full of feed where they can reach it, they will gorge themselves,” she says. “That’s why we were selective of the horses we used for our research. We made sure they tried both diets before settling on the one they preferred.”

They also considered scent. “We ­wanted to explore how the horse reacted to the odor, because we know the sense of smell and taste are linked, but the aroma of the product is what the horse encounters first before it ever takes a bite,” Francis says.

So what flavors do horses prefer? Francis says horses in the study chose sweet flavors over sour ones, such as lemon and orange, largely because carbohydrates are their primary energy source (sugar molecules are the basic units of ­carbohydrates).

“Horses in natural settings choose feedstuffs based on nutrient content,” Francis says. “As a result, horses like sweets—sugar cubes, peppermints, apple slices. But while few turned up their noses at anything sweet, the horses in the study did prefer one flavor over them all: anise. A lot of people don’t even like the smell of black licorice, but horses in our study preferred the taste of anise as compared to apples or peppermints.”

Some horses have food texture preferences, just like humans do. “One of my mares prefers a solid texture, like a carrot or an apple, but doesn’t like others, such as the texture of a banana,” she says.

Meanwhile, some animals decline anything fresh in favor of a manufactured feed or treat. “Texture is a factor feed manufacturers must take into consideration when designing a product,” Francis says.

Bitter foods also rank low, likely because horses in the wild avoid plants that are toxic to them, and most of those plants taste bitter.

“Horses are very picky—they are naturally selective grazers—and will avoid anything that is harmful to them,” Francis says. “So bitter weeds such as milkweed and goldenrod are avoided.”

If the horse is avoiding hay, check it to be sure it’s free of these contaminants, Thunes says.

So how does an owner feed a finicky horse? Thunes says getting the animal to consume forage is the best place to start. “Horses can go without grain, but they have got to eat enough forage,” she says.

On average, a 1,000-pound horse requires 15-25 pounds of forage every day. When horses turn up their noses at hay, it is critical that owners find viable alternatives such as hay pellets, beet pulp, or a complete senior feed or consider different types of hay, such as some alfalfa in place of grass hay.

“You can replace up to about 40% of their hay intake with beet pulp, or hay pellets can also be added (to a horse’s diet) to reduce the number of pounds of hay a horse has to eat a day,” Thunes says. “And, it is a rare horse that won’t eat alfalfa.”

“Some people also add molasses to feed or oral medications to entice the horse to eat (them) and reduce sorting,” Francis says, “but, commercially, you can get beet pulp with molasses or without it. Adding molasses may not be a viable option for horses that are sensitive to nonstructural carbohydrates (NSC), such as those with equine metabolic syndrome, insulin resistance, or are prone to foundering.”

Owners can enhance a concentrate feed’s taste topically by combining flavors that tempt most horses in an oil carrier and mixing them into the horse’s feed. They can also experiment by switching from pellets to textured feed, according to horses’ preferences.

“There are a lot of variations, so try switching to another kind of grain that has the same nutrients but may have a different smell or flavor,” Thunes says. “If they won’t eat one kind of grain, keep trying.”

Try switching to another kind of grain that has the same nutrients but may have a different smell or flavor.
Dr. Clair Thunes

Eventually, the horse should respond. How long it takes varies between horses.

“I always ask people how long they have been giving the horse this particular feed and how long has he been refusing to eat it,” Thunes says. “You have to try (the new feed product) for long enough to give it a fair chance—leave it in their stall overnight, and you may find they eat it even if they are disinterested when you first feed them. Keep trying for several days with the same feed before giving up. It’s possible that if they realize that they aren’t getting anything else, or that it isn’t actually killing them, that they’ll eat it.”

While the research into horses’ tastes continues, some owners have other questions, too, about whether horses’ flavor preferences change over time, and if exposure to the taste preferences of other equids determines whether they do.

Clarissa Cupolo, a horse trainer based in Parrish, Florida, says her Quarter Horse Mocha consistently turned her nose up at peppermint treats when she was a young filly.

“Now she will run you over for one,” Cupolo says.

Meanwhile, her Haflinger Beauregard developed a taste for sour ones. “I had a lemonade slushy that was just too sour for me, but Beauregard absolutely loved it,” she adds.

Likewise, his stablemate now begs for tangerine peels and munches the fruit after the seeds have been removed.

“I think it has to do with what they are used to and what they see other horses eating,” Cupolo says.

Whatever the reason, horses enjoy some flavors and avoid others, just as people do. “We don’t know if horses have cravings the way we do but, no matter what you put in front of some horses, there are some things they just won’t eat,” says Thunes. “Some horses are just more likely to try new things than others.”

For Yakin-Palmer, the challenge to find what consistently appeals to Cera is ongoing. “Next I’ll try a feed that has the proper nutrients, but no flavor,” she says. “I’ll find something that she likes—­eventually.”

IF YOU ARE INTERESTED IN ADOPTING THIS HORSE, PLEASE SUBMIT AN “ADOPTION INQUIRY” VIA OUR WEBSITE: ALLABOUTEQUINE dot ORG. NO…
06/30/2021
Total views: 1415