Helping Horses Cope With and Recover From Poor Air Quality

Western cities are experiencing some of the worst air quality in the world as wildfires rage in California, Oregon, and Washington. An OSU equine internal medicine specialist offers advice to help exposed horses. 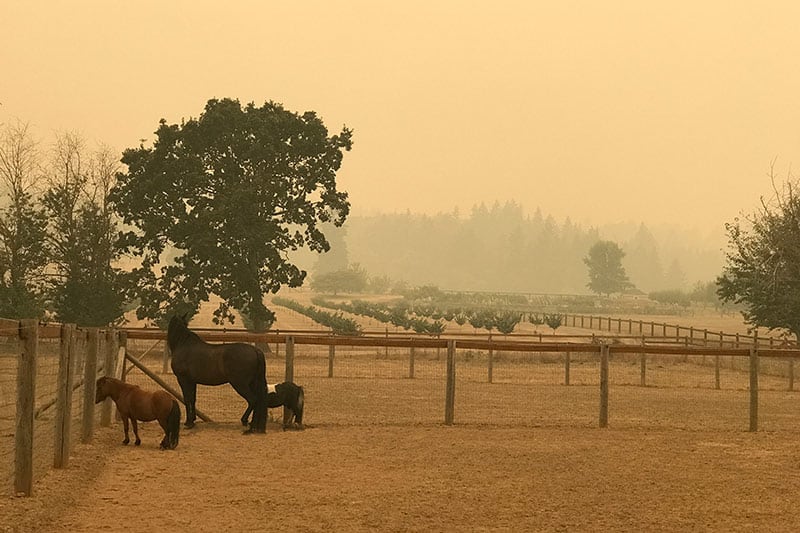 As people on the West Coast experience one of the worst wildfire seasons in history, a secondary threat—smoke—has emerged to plague people and horses who might be hundreds of miles from the raging flames.

The U.S. Environmental Protection Agency’s air quality index (AQI) ranks air pollution and health concerns on a scale from 0 to 500. The EPA considers an AQI above 300 “hazardous”; many cities in California, Oregon, and Washington are currently experiencing AQI levels greater than 500.

“If horses are exposed to hazardous air, as we are having across much of Oregon, there is evidence to suggest they can develop milder, asthmalike signs, including coughing and reduced respiratory function,” said Erica McKenzie, BSc, BVMS, PhD, Dipl. ACVIM, ACVSMR, a professor of large animal medicine at Oregon State University’s Carlson College of Veterinary Medicine. “Horses in direct fire situations likely have a greater risk of disease or severe disease, but certainly both can be affected.”

McKenzie pointed to research recently published in the Journal of Veterinary Internal Medicine that suggested the 12 Thoroughbreds used in the study developed mild asthma due to deteriorating air quality associated with bushfire smoke.

Horses exposed to poor air quality for extended periods might show respiratory signs such as coughing or snorting, and they could have nasal discharge. More severe signs could include persistent coughing, labored breathing, heavy or abnormal nasal discharge that is white or yellow in color, loss of appetite, or fever if secondary infections become a concern.

Older horses with existing respiratory conditions or cardiac issues might be at greater risk of developing problems from exposure to hazardous air quality conditions.

Evacuating to an area of better air quality isn’t currently an option for many horse owners in the affected area, which spans much of the West Coast and Pacific Northwest; however, if you’re a horse owner in an area with poor air quality, you can make management changes to reduce your horse’s risk of respiratory disease. One of the most important is to stop all exercise until the air quality improves, McKenzie said, because any forced exercise increases the volume of air that passes through the lungs and respiratory tract.

“How you act in a bad air environment matters,” McKenzie said, explaining that even lower AQI numbers can be detrimental to a horse’s respiratory health. “Horses exercising intensely generate massive airflow through the lung, so even if the air they are breathing is not as poor in quality, the total passage of dangerous particles through the airway might still be greatly increased.”

Horses should not be exercised at AQI readings over 100-150, she said. People should take their own health into consideration, too, as riding can be a physically demanding sport. Follow EPA recommendations for outdoor activity, and err on the side of caution.

Be equally cautious when it comes returning to an exercise regimen.

“A common and reasonable recommendation is to wait four to six weeks after resolution of air quality issues when we know they have been severe and sustained as in the current situation,” said McKenzie, whose career research focus is animal exercise physiology and exercise-induced disease.

While that is enough time for respiratory issues to heal, it also is long enough for horses to lose the level of fitness they had prior to the fires, McKenzie said. Consider reducing the amount of feed to avoid unnecessary weight gain, and reintroduce work slowly while keeping an eye out for signs of ongoing respiratory disease, such as exercise-induced coughing or an abnormal lack of exercise tolerance beyond loss of fitness.

In addition to halting all forced exercise, another simple way to reduce the risk of hazardous air quality on your horse is to limit the amount of dust in the environment. Make sure horses aren’t inhaling extra dust by moistening feed, such as hay, and wetting down bedding in stalls or pens.

In light of all the changes to your horse’s schedule and environment, McKenzie recommends trying to keep your horse’s routine as consistent as possible, such as the times of day you feed. Stress can take its toll on animals, so consider your horse’s mental health, too.

“Spend time with your animals. They are acutely aware of these disturbances and respond to changes in owner emotions and behavior,” she said. “A little extra TLC goes a long way.”