Equine behaviorist Dr. Sue McDonnell: “Imagine if that rider had loosened the reins, patted the horse on the neck, and left the arena.” “Imagine if that rider had loosened the reins, patted the horse on the neck, and left the arena,” said Sue McDonnell, PhD, CAAB (Certified Applied Animal Behaviorist), when we chatted on the phone Monday morning.

“That rider” is the now infamous German Olympic Modern Pentathlon competitor, Annika Schleu, who came into the equestrian portion of the five-event sport in Tokyo on Aug. 6 with a commanding lead. But, after taking the allotted 20 minutes to familiarize herself with her mount, Saint Boy, before tackling a 1.2-meter (meaning the jumps were nearly 4 feet high) course, the horse balked at the arena gate, shifted weight to his hind legs, and started backing up.

To McDonnell, a world-renowned equine behaviorist based at the University of Pennsylvania’s School of Veterinary Medicine, the horse’s message was clear. He was overfaced, scared, and in pain. “He showed classic mouth pain face (physical pain or entrapment panic): gaping mouth, backing away from pain, head high, visual focus downward toward the mouth,” she said. Basically, he tried to tell the people around him he wasn’t okay, but they didn’t hear him.

Saint Boy’s message was clear. He was overfaced, scared, and possibly in pain…He tried to tell the people around him, but they did not hear him.

Instead, Schleu’s coach, Kim Raisner, encouraged her to hit the horse with her crop, which an emotional Schleu did. When the horse backed toward the arena fence, Raisner put her fist into his haunches.

Schleu kept at it with her whip and spurs, making it to the course and crashing through jumps until being eliminated not for the horse’s welfare but because the pair exceeded the maximum jump refusals permitted.

The live commentators, and later some mainstream reporters, blamed the horse for being uncooperative and unruly and ruining Schleu’s chance at a medal. One headline read “Misbehaving horse wreaks havoc and kills dreams at Olympic pentathlon.” Some equestrian sport social media influencers even framed the horse as spoiled and blamed his behavior on an earlier round when he refused to jump and was dismissed from the arena, claiming he had learned he didn’t have to do his job. 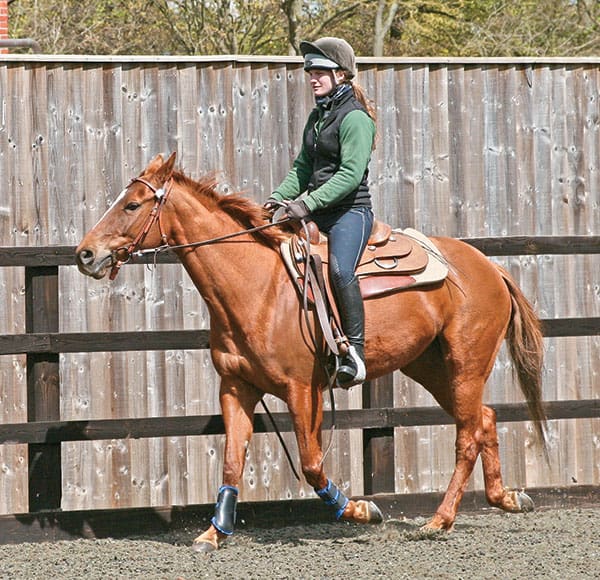 While I found these responses disappointing, they didn’t surprise me. It’s common in the horse world. The “sour” or “spooky” horse gets blamed for the bad round or inconsistent test. The child is given a crop and encouraged to show the pony “who’s boss.” The gelding is called a jerk, the mare is a “rhymes with witch.” The horse tries to tell us she doesn’t understand, she’s overwhelmed, or she’s in pain, but often we don’t listen.

The Olympic Modern Pentathlon incident also left me with a lot of questions: Why are horses in an Olympic event not overseen by the FEI, the international sanctioning body of equestrian sport? Who sources the horses, and do the animals undergo veterinary inspection on par with other Olympic equine athletes? Does the tack belong to the rider or the horse, and who ensures it fits and the horse is comfortable? Are the horses properly warmed up prior to their 20-minute speed-dating sessions with the pentathletes? Why was this horse used again after showing distress and being eliminated earlier in the competition? And, finally, is the poor equitation and horsemanship shown in still photographs and video clips the norm for Olympic-level modern pentathletes? The journalist in me wants to know but, honestly, I’ve looked, and answers are hard to find.

“Changes in Riding were already in the pipeline due to the new Modern Pentathlon format coming into force in 2022 for the Paris 2024 Olympic cycle. Horse welfare and athlete safety will be at the centre of this process and the UIPM 2021 Congress in November will provide an opportunity for UIPM’s national member federations to participate in a collective effort to secure the future of Riding in Modern Pentathlon.”

Part of me doesn’t want to judge a sport that isn’t my own. Maybe I’m missing something because I don’t understand the game or how it’s played. However, this incident opens the curtain on a systemic problem we have in the horse industry. Despite research that clearly shows horses don’t learn while fearful or in states of learned helplessness, some still get pushed past their thresholds inside round pens, over obstacles, and around dressage courts. We also know that an estimated 90% of performance horses experience painful gastric ulcers, yet every day horses are punished for acting “cinchy” while being saddled or kicked harder when they’re reactive or, inversely, dull to the leg.

The whole thing had me a bit down about the widespread misunderstanding of horse behavior, welfare, and what our horses are telling us.

But then McDonnell’s comment about loosening the rein and patting the horse reminded me of a recent incident when I saw a rider do just that. A friend’s 17-year-old daughter is a dressage competitor who had the goal of qualifying for the North American Young Riders’ Championship on her talented but sensitive mare.

At a show this summer, the pair entered the arena and started around the outside track as the bell rang for them to begin their test. Something about the loudspeakers and show atmosphere had the mare on edge. The pressure proved too much, and she reared. This wasn’t a little hop like that of Saint Boy in the Olympic Modern Pentathlon—this was a 17-hand mare standing all the way up. The teen rode the rear tactfully, keeping her seat and composure. As her mare came back to earth, she softened the rein pressure and patted and talked to her reassuringly.

The time it took to settle her mare meant they’d be eliminated, but she didn’t rush her horse. Instead, she entered at A, saluted, and approached the judge to thank her for her time before excusing herself and exiting the arena on a loose rein.

This teen exhibited maturity, good horsemanship, and an understanding about what her horse needed from her. That is the kind of Olympic moment I wish we’d seen in the Modern Pentathlon. But knowing the next generation includes riders like this particular young person gives me hope for the future of horse welfare in equestrian sport.