Injuries: They’re Not Just For Racehorses

A few weeks ago I attended New Vocations’ second-annual Barn & BBQ party, a celebration of retired racehorses and their athleticism and versatility, along with a tip of the hat to an organization that’s doing a fabulous job in ushering hundreds of them into their second careers. Over dinner I ended up having a lively […]

A few weeks ago I attended New Vocations’ second-annual Barn & BBQ party, a celebration of retired racehorses and their athleticism and versatility, along with a tip of the hat to an organization that’s doing a fabulous job in ushering hundreds of them into their second careers. Over dinner I ended up having a lively conversation with a group of fellow-retired-racehorse owners about musculoskeletal injuries sustained during and after racing.

It started with a colleague and me discussing a recent experience managing my retired racehorse. For all you pedigree enthusiasts, It Happened Again is a graded-stakes winner who won just shy of $700,000 during his six-year racing career. “Happy” retired sound in July 2014 at the $25,000 claiming level. I bought him in December of that year directly from his racing owner, and I’ve been enjoying working with him ever since. This spring he was going quite well and we were entered in our first two shows of the year. 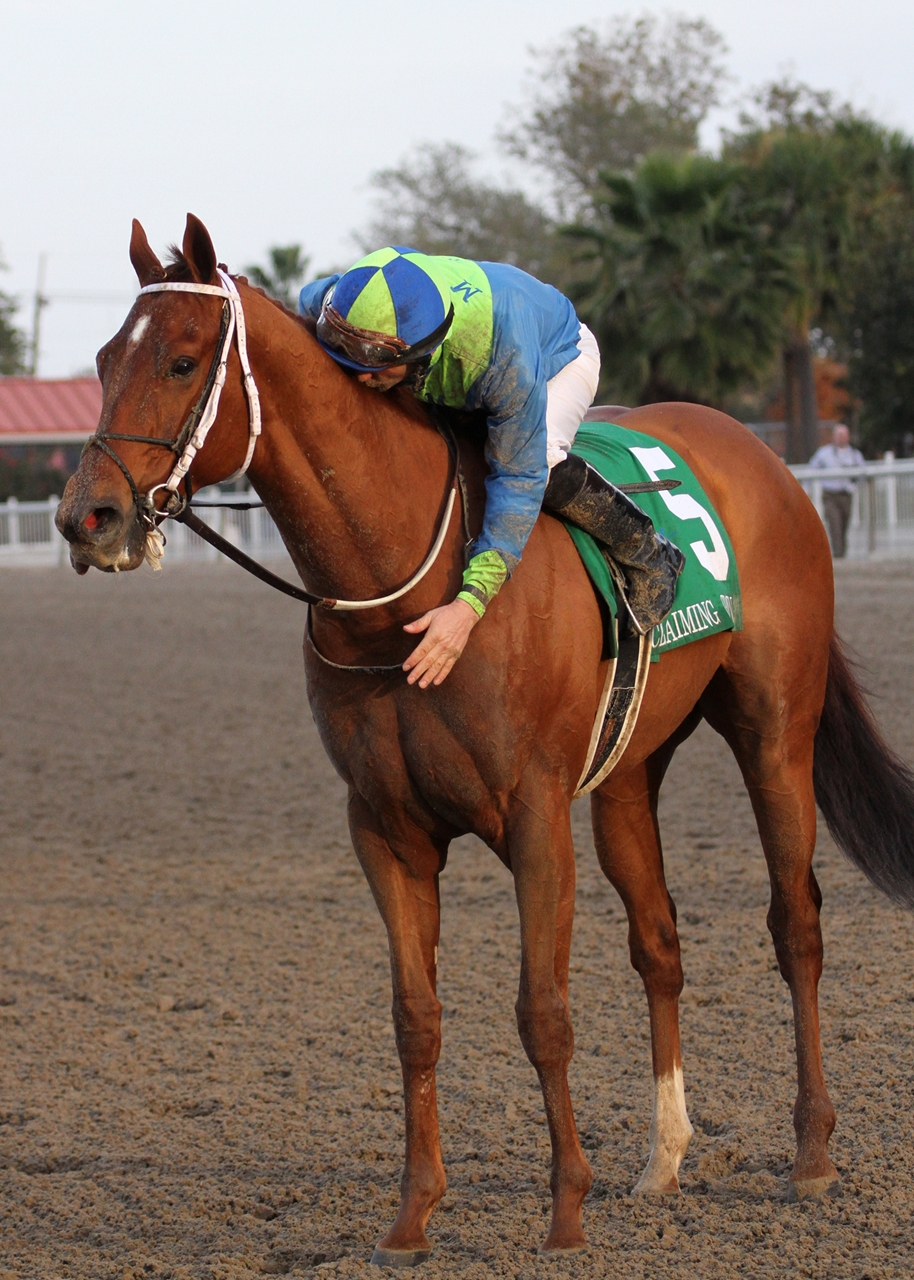 Jockey Shane Sellers gives credit to It Happened AgainÑnow known around the barn as “Happy”Ñ after winning the Claiming Crown-The Jewel at Fair Grounds, in New Orleans, on Dec. 3, 2011. His racing owner, Maggi Moss, retired him in July 2014, and it’s safe to say he gets hugged like this regularly in his second career with me.

But about eight weeks ago, on an ordinary Friday spent in his pasture, Happy fractured a sesamoid bone in his right forelimb.

Happy was neither performing in any athletic capacity under my direction when he sustained his injury, nor was he on any medications. He’s a horse that was (and is) in excellent body condition on a diet of pastureÑwhich was still coming in on March 30Ñorchard grass hay, an alfalfa-and-timothy mix, and a proper concentrate feed for his activity level. Happy likely has no genetic predisposition to fracture, he was simply a horse being a horse. He was probably having fun and playing hard in his pasture with his buddy, another off-track Thoroughbred (OTTB) named Daren, and smacked one of his own hooves into that bone.

Admittedly, this was the first time I’d seen a X ray of Happy’s lower limbs. The veterinarian I had perform his prepurchase didn’t see anything concerning that would warrant radiographs.

And indeed, most every veterinarian who’s seen his legs since then has marveled at how “clean” they are (that is, without apparent lumps/bumps/swellings indicating old injuries) for a horse with 51 starts. The X rays we took a few days after his recent injury (he was sound for two days, but we kept him on stall rest just in case, thank goodness) confirmed he does have remarkably good radiographs for any 11-year-old equine athlete, much less one with his performance record.

But for all his limb soundness and gorgeous X rays, a closer look at that medial sesamoid where he’d clearly smacked his fetlock on something revealed he had knocked off the edge of the bone. This little sliver of white on the screen has set us back a few months in our training, but I’m very lucky. It could’ve been much worse; there’s no tendon or ligament involvement, so it shouldn’t require surgery. 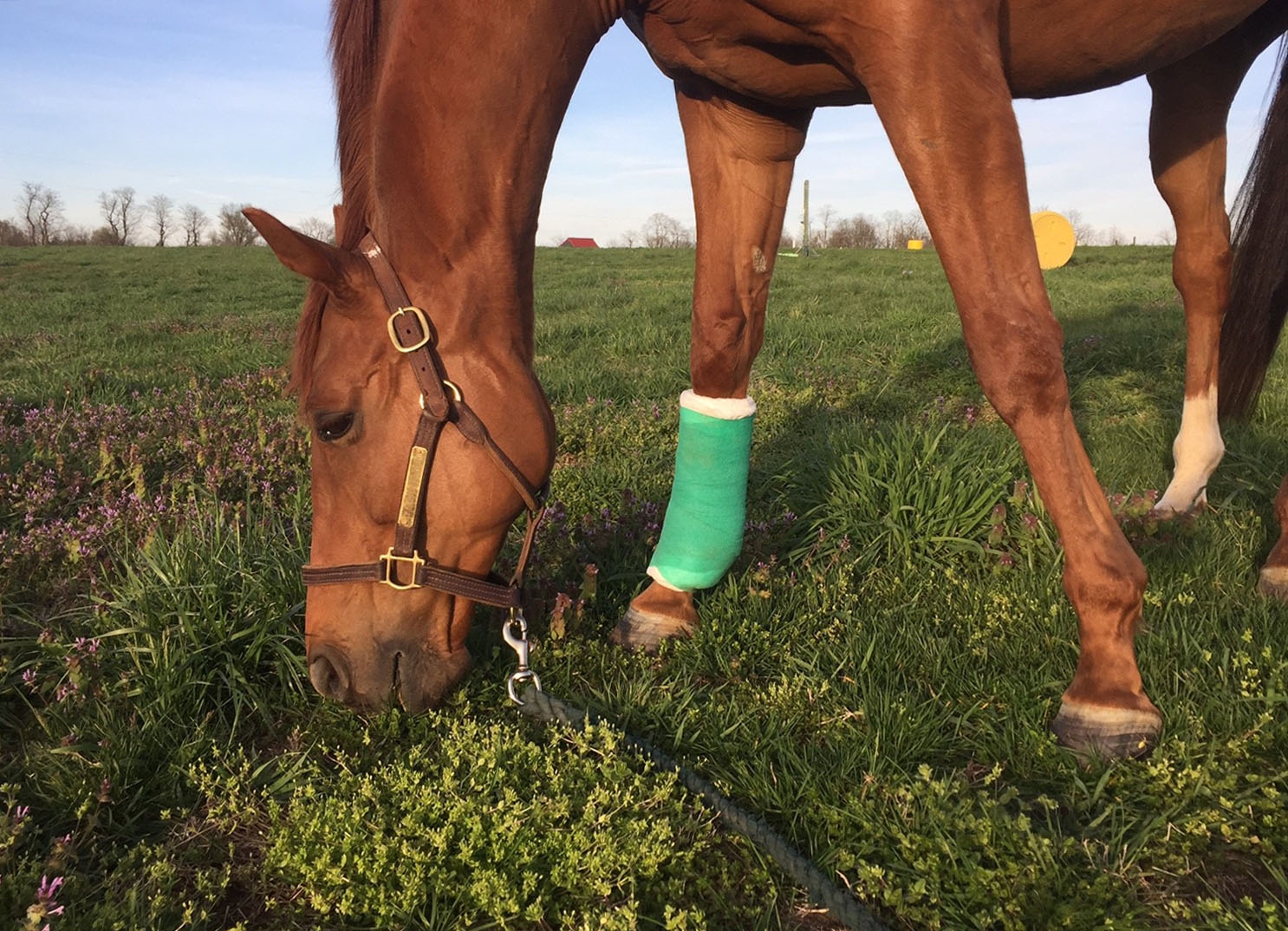 We (that is, Happy’s care team and I) expect him to make a full recovery and return to athleticism, barring any unforeseen setbacks. After the initial (and sometimes acrobatic) five weeks of hand-grazing, he was in a wonderful rehab program at a friend’s farm for three weeks, spending time on the automatic walker and then in controlled turnout each day. He looks sound and strong, and the vet rechecked him about two weeks ago. He’s back home and I have clearance to walk and trot him under tack, which is good for both of our brains and bodies. Tomorrow we’re allowed to canter.

“Is the distinction of whether my horse’s injury was incurred during or after racing really that important? I don’t think so.“

Interestingly, the most common question I’ve gotten from horse people when they first heard about the fracture is, “Are you sure it’s not an old racing injury that he aggravated?”

Yes, I am sure. We could see evidence of blunt trauma: He busted the skin open over the sesamoid. The bone appeared normal, aside from that broken-off piece floating out in the ether. 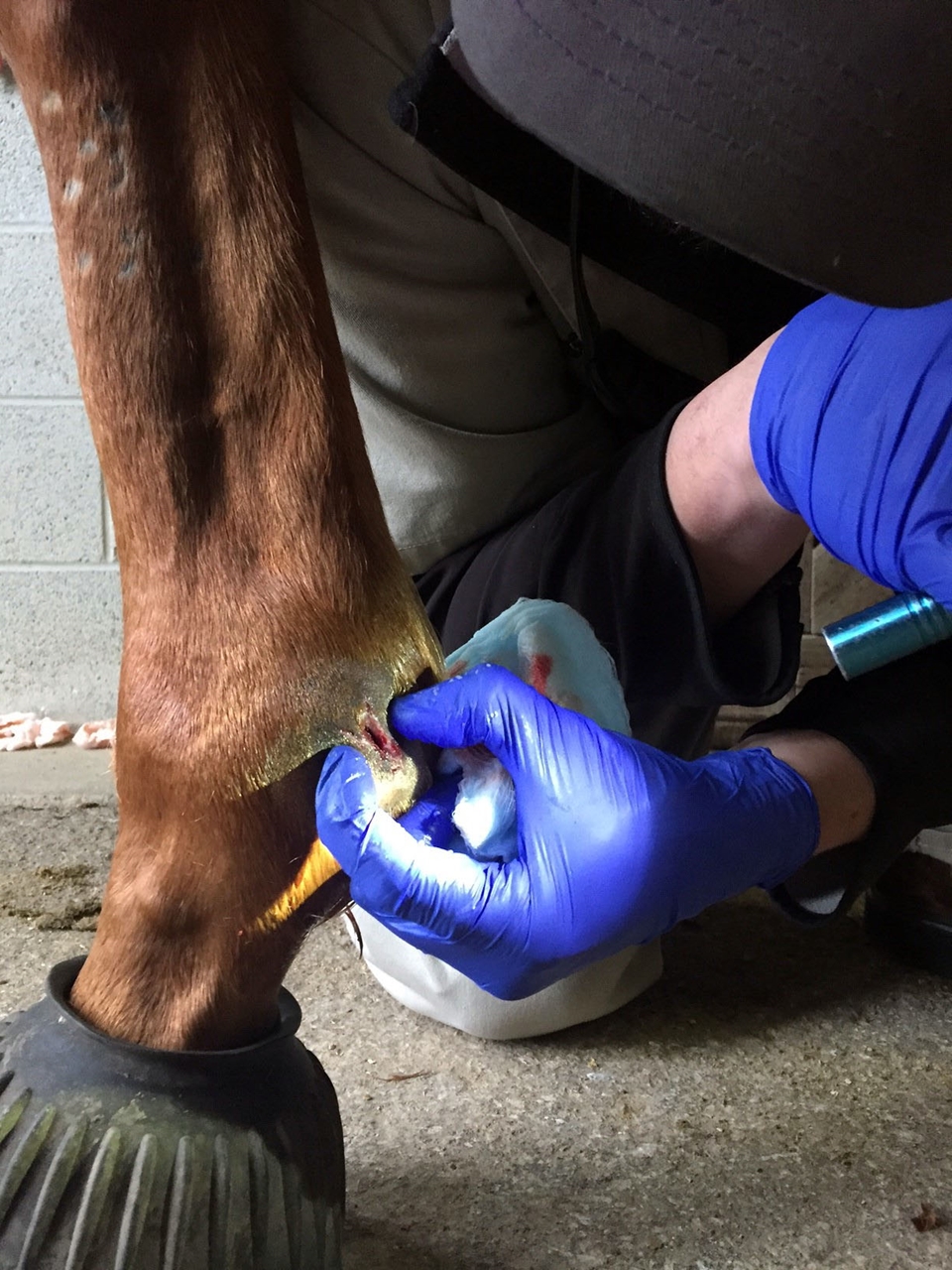 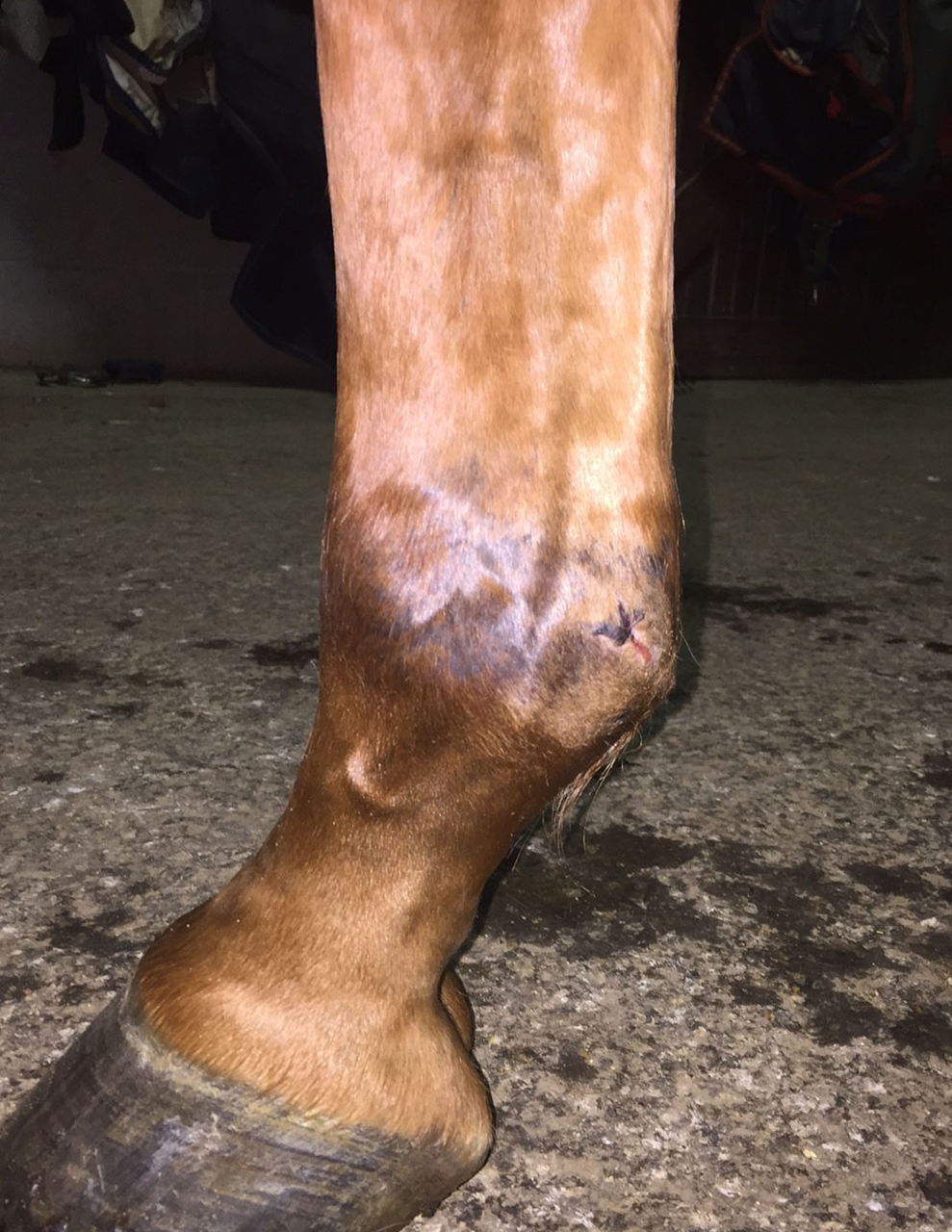 Laceration on the afternoon of the injury and 16 days later.

But the recurrent question has bugged me a little and caused me to thinkÑIs the distinction of whether my horse’s injury was incurred during or after racing really that important? I don’t think so.  High-performance athletes sustain athletic injuries, no matter the breed, sport, or even species, and even if they’ve been trained well, are in good health, and enjoy their game. They happen in the arena at the farm and in front of a Grand Prix audience, on a practice field and on center court in the championships.

Sometimes injuries happen when horses are goofing off in the pasture.

With horses, most of these injuries can be rehabilitated, some are career-ending, and a few are life-threatening. We tend to hear the most about the final two groups. And while we don’t hear so much about the animals in the can-be-rehabbed group when the injuries happen, we certainly do when they’re about to transition to their second careers (or, in the case of rehoming organizations or sellers, they might hear very little, as far as interest in these horses). And that’s where my conversation with my colleague and the table full of OTTB owners picks back up.

Ask any person involved in finding jobs for Thoroughbreds after retirement from racing, and you’ll hear it’s more difficult to place these horses with a known past injury. Many potential buyers or adopters hedge their bets and understandably err on the “safe” side, opting for what feels like a “clean slate” and a better likelihood for sound performance in the future.

They shy at an old bow. Or a sesamoid fracture.

Other horse owners, like one of my good friends here in Lexington, gravitates toward horses that will need help and be harder to place. She’s okay with a pasture ornament case, and loves the responsibility.

I landed somewhere in the middleÑthough probably leaning toward the conservativeÑpurchasing a sound war horse (50+ starts) with a six-year racing career. To me that spoke volumes of his potential soundness and gave me some peace of mind for the years ahead.

I sought out that peace of mind. And, yet, he injured himself three years off the track. 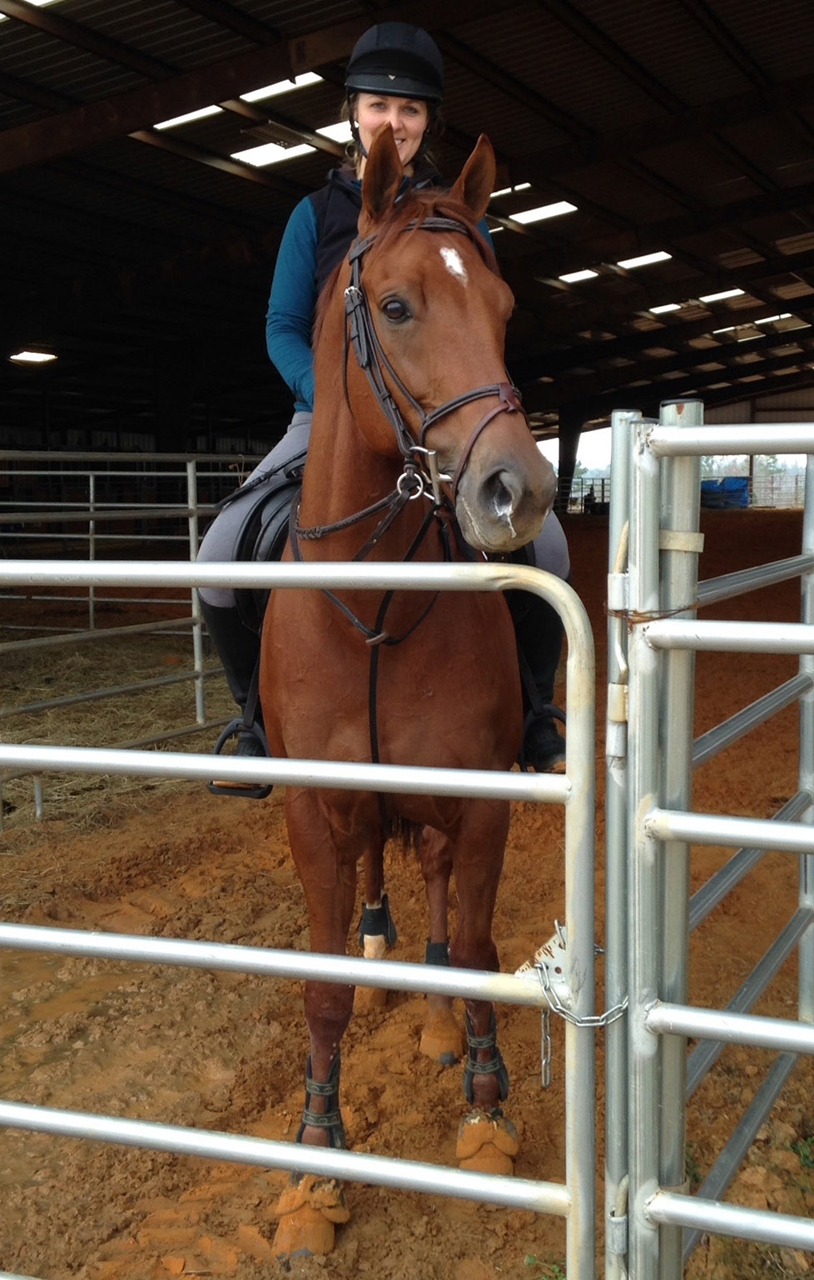 My first ride on Happy post-racing, back in December 2014.

So why have many of us as riders (myself included) shied away from off-track Thoroughbreds with old injuries, even if the horses are already sound or have the potential to be? I know of horses who have had bone not nearly clean as my horse’s and have gone on to perform successfully at levels high above my own. You can probably think of some, too. And then I’ve known of horses that have come off the track sound and have had freak paddock accidents much worse than Happy’s, rendering them unsound or worse. You could regale me with stories of your OTTBs (or any breed for that matter) who have managed to get hurt long after the purchase.

So why discriminate on whether an injury is pre- or post-racing? Is our concern due to a perception that a racing injury is somehow worse or more threatening than one sustained during a strenuous dressage work or over tricky trail terrain, or is our discomfort simply with taking on the unknown and not getting our return on investment?

Personally, for me, racing produced a thoughtfully bred, sound horse with a good mindÑone who can walk the perimeter of the farm property relaxed and on the buckle and seems to enjoy going for a good gallop, as well. One who also enjoys a rough-and-tumble afternoon in the paddock. I’m sure there are others who can claim the same about their mount, only their horse got their old sesamoid fracture on the track, not off it.

Racing didn’t break my horse. Just simply being a horse did.

Happy and me at a hunter pace last fall. Making the Best of Stall Rest

Beautiful 2 year old Clara is now available for adoption by an experienced horseman/women who wants to bring up a…
08/12/2022
Total views: 1325