Dr. Stephanie Valberg explains how five major advancements in veterinary technology have helped her and others learn more about and discover new equine muscle disorders. 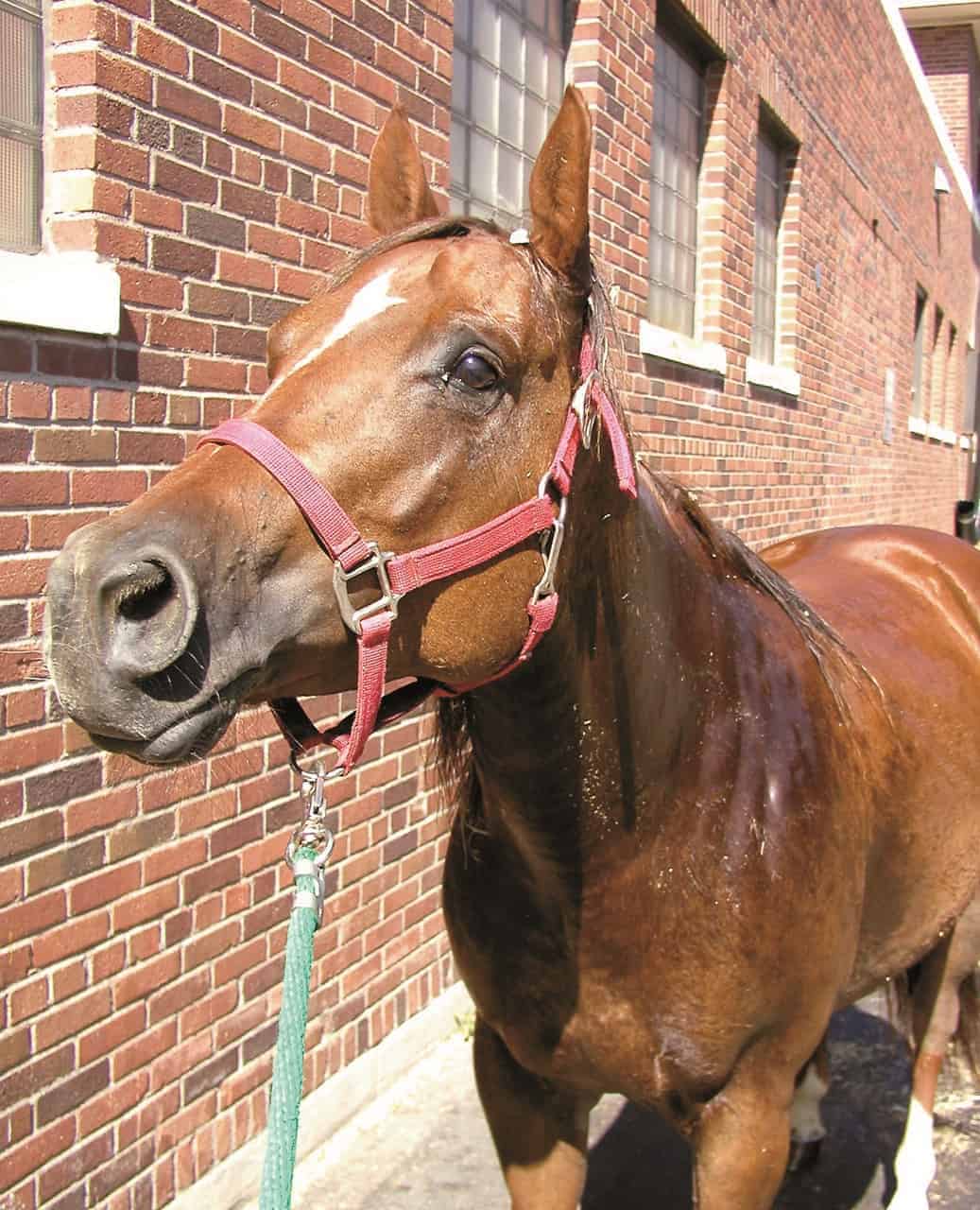 The Beatles and British rocker Joe Cocker, among others, said they get by with a little help from their friends, but they’re not the only ones. Equine researchers continuously make great progress in their studies. And as technology advances, so can the depth of their research.

Before she described the advancements that helped her research progress, Valberg took a quick look at the history of equine muscle disease.

In the past, horses had a much different role in society and significantly higher workloads than they do today. They worked on farms, as a means of transportation, and more. And as far back as the late 19th century, horsemen and veterinarians had described a disease in draft horses, calling it azoturia; one account from 1883 described the disorder’s clinical signs as “sweating and trembling, scarcely able to turn in the stall, the muscles of the back and loins in a state of spasm, tail quite stiff.” Veterinarians also recognized that azoturia most commonly occurred after periods of hard work following a layup, she added. For this reason, the disorder was colloquially termed “Monday morning disease.”

Starting in the early 20th century, veterinarians began looking more closely at the disease and searching for answers. Valberg said that in 1923, researchers determined that azoturia was, in fact, a muscle disease, not a kidney disease as previously suspected, that resulted in myoglobinuria (in which myoglobin, a type of muscle cell protein, appears in the urine because of muscle cell damage). In the 1980s, and after decades more research, scientists introduced the term exertional rhabdomyolysis (ER) to describe the condition referred to by horse owners as tying up.

This brought Valberg to the first scientific advancement that helped her research progress.

Researchers knew ER was a muscle disorder. But they gained significantly more information about it once they determined they could use a simple blood test to assess the amount of muscle damage.

The enzymes creatine kinase (CK) and aspartate transaminase (AST) leak out of muscles and into the bloodstream if muscles are damaged. As such, elevated serum levels of each are indicative of muscle damage.

With the invention of the high-speed treadmill for horses came a new field of research: equine exercise physiology. Coupled with the development of a percutaneous muscle biopsy technique (whereby the veterinarian takes a muscle tissue sample via a biopsy needle), researchers could see what goes on in muscles during exercise and study muscle metabolism as it happened, Valberg said.

In the early days of equine exercise physiology, she and colleagues in Sweden conducted a study of six Standardbred horses with a history of tying up and five unaffected control horses. They had horses jog on the high-speed treadmill for 55 minutes at a speed of 5 meters per second (roughly 11 miles per hour), collecting samples throughout.

They were able to induce ER in three horses, all of which had a sudden onset of significantly elevated serum CK levels between 15 and 30 minutes after exercise started compared to horses that didn’t tie up, Valberg said.

In the same study, the team tested a theory at the time that increased lactic acid (which muscles produce during intense exercise) buildup in the muscle might be involved with ER. However, they found that ER horses did not have much lactate in their muscles following exercise, proving that lactic acidosis isn’t behind ER.

Advancement No. 3: A Standardized Clinical Approach

It might seem like common sense that evaluating all patients in the same manner can help pinpoint consistencies or irregularities, but what approach is best? Valberg said developing a standard clinical approach helped veterinarians and researchers ultimately discover that not all horses tie up for the same reason or have the same clinical signs of disease.

The standard examination technique for horses that tie up involves:

In its early days, scientists at the University of California, Davis (UC Davis), Neuromuscular Diagnostic Laboratory focused mostly on small animals, Valberg said. However, in doing so, they introduced the concept of using specialized freezing techniques to preserve muscle biopsy samples rather than just fixing them in formalin. This allowed researchers to see structures in the muscle better during analysis. They also found that using different stains on muscle biopsy samples can reveal different disease processes, such as fat metabolism, oxidative metabolism, and glycogen metabolism, she said.

Valberg described a case in which she and colleagues used these new techniques to identify a muscle disorder in a 3-year-old Quarter Horse mare. She said the mare had a history of chronic stiffness, firm muscles, exercise intolerance, and persistently high serum CK levels.

Using a newly described muscle biopsy assessment technique, Valberg determined that the mare had abnormal glycogen (stored sugar) building up in her muscles, something not seen in Thoroughbreds and Standardbreds. A biochemistry evaluation revealed twice as much glycogen as normal in the mare’s muscles.

She and her team diagnosed the mare with polysaccharide storage myopathy (PSSM), a condition now found in roughly 10% of Quarter Horses and 36% of Draft horses.

Through continued research, Valberg and colleagues determined that PSSM horses had too much glycogen, but not enough energy, in their muscles. So they worked to find a diet that slowed glycogen synthesis and encouraged glycogen metabolism.

“The body either makes or burns glycogen,” she said. “It can’t do both.”

They found that a diet low in starch and sugars and high in fat (to provide extra energy), along with regular exercise to burn the glycogen, helped relieve PSSM horses’ clinical signs and let them return to work.

Valberg said she prescribed the diet and exercise regimen for the 3-year-old Quarter Horse mare, who responded well to treatment.

Advancement No. 5: The Equine Genome

Advances in equine genome mapping also allowed Valberg and colleague to identify the gene responsible for PSSM in Quarter Horses. They studied 48 PSSM horses and 48 unaffected controls. They used 105 genetic markers (microsatellites) spaced across all the equine autosomes and identified a marker of interest that followed the PSSM trait.

They continued investigating and sequencing genes near the identified genetic marker, eventually landing on the glycogen synthase gene GSY1. They confirmed that a GSY1 mutation altered glycogen synthase activity and that mutations were present in 6% of a random Quarter Horse population and 80% of PSSM horses.

Scientists later sequenced the complete equine genome in 2009, opening new doors for researchers in a variety of fields, including muscle diseases. This allowed Valberg and others to use a single nucleotide polymorphism chip to analyze genes of interest and identify those associated with specific traits and disorders.

“In retrospect, it was very lucky” to find that marker for PSSM using 105 microsatellite markers, Valberg said, considering there are 670,000 single nucleotide polymorphism markers on today’s gene chips.

Finally, Valberg described a muscle disorder she and colleagues are currently working to unravel.

Valberg and colleagues collected muscle biopsies from 30 Arabian endurance horses for evaluation and looked for signs of already-known disorders, but to no avail. Eventually, she said, they found breaks and weakness in the affected horses’ muscle fiber contractile proteins using an electron microscope—a highly specialized type of microscope that uses electrons to illuminate a specimen and create an enlarged image, sometimes up to 2 million times larger than the original specimen. They termed their newly identified condition myofibrillar myopathy (MFM).

However, because electron microscopy isn’t practical for use in the real world, Valberg tested whether desmin stain on a muscle biopsy could identify cases. She found that healthy horses’ muscle fibers remained aligned, while case horses developed clumps of desmin around their weak myofibrils.

“This had some similarities to MFM in humans, so this looked promising,” she said.

They followed their lab work with an exercise test using healthy and affected horses from which they collected muscle biopsies before and after a 45-minute ride. There were no metabolic differences between the groups, but the team found four proteins at rest that differed in case horses compared to controls.

Currently, Valberg and colleagues are working to see if they can manage MFM nutritionally and are trialing new supplements, developed in conjunction with KER, in affected horses.

If you are interested in adopting this horse, please submit an ‘Adoption Inquiry’ via our website: Allaboutequine dot org. No…
07/01/2021
Total views: 2753