Twin pregnancies in horses can be incredibly risky—even deadly—for mare and fetuses alike, so it’s important to detect them early and take appropriate steps to achieve a positive outcome. However, it can be challenging to diagnose twins using traditional ultrasound, said PhD candidate and predoctoral fellow Lisse Vera, of the Ghent University Faculty of Veterinary Medicine, in Merelbeke, Belgium. Fortunately, she and colleagues, have confirmed that clinicians can detect two fetal heart beats on electrocardiograms (ECG) if they place electrodes carefully.

Twin pregnancies occur when mares double ovulate, meaning they release two eggs in the same cycle, Vera said. That happens in about 25% of heat cycles in Thoroughbreds and Warmbloods, although many of those don’t result in twin pregnancies. When they do, veterinarians often identify them through ultrasound checks in the second week of pregnancy and eliminate a twin by pinching it.

Most twin pregnancies, if not reduced to a single pregnancy, result in abortion, stillbirth, or weak and nonviable foals, Vera said.

While transrectal ultrasound can identify twin pregnancies very early during the embryonic stage, this method is less effective at detecting two fetuses once they’ve grown too large. And transabdominal ultrasound (using the ultrasound probe against the abdominal wall) might allow scientists to get a glimpse of a foal—if it’s not hidden behind the mare’s intestines. But to diagnose a twin pregnancy, it’s important to see both foals at the same time, Vera said. Otherwise, only seeing one foal at a time could be confused with seeing the same foal twice.

Vera and colleagues followed a 15-year-old Warmblood mare who presented to their clinic with signs often indicative of early labor—sweating, pawing, and getting up and down frequently—at eight months of gestation. Additionally, her udder was enlarged. Once they confirmed that placentitis (inflammation of the placenta, which can be treated with antibiotics) or early labor (because her cervix was still tightly closed) weren’t to blame, they suspected a twin pregnancy.

Because it was too late to identify two fetuses using ultrasound, the veterinarians used fetal ECG to try to detect fetal heartbeats. As with imaging, they needed to detect both heartbeats in the same ECG reading to confirm a twin pregnancy, Vera said. Veterinarians miss many late-stage twin pregnancies because they find only one heart beat on ECG, she added.

“The ‘standard’ electrode position (with the green electrode placed on the neck, the yellow electrode on the middle of the flank region, the black electrode at the croup of the mare, and the red electrode on the linea alba, about 15 centimeters above the udder) can be used in every mare to identify a living fetus,” she said.

“But a twin pregnancy requires ECG recordings with the electrodes placed at different points around the thorax, which is achieved by (placing) the yellow and red electrode around the belly of the mare,” she added.

Vera’s group took 12 ECG recordings with the electrodes in different positions. Eleven of those recordings showed one fetal heartbeat; only the last one picked up the two simultaneous heartbeats.

“Sufficient effort should be made because of false negative recordings,” she said.

In this mare’s case, the twins went undetected until it was too late to reduce. The mare delivered one stillborn and one weak foal at 10 months gestation that eventually died. The mare had retained fetal membranes, a common side effect of twin pregnancies, Vera said, which led to her developing laminitis.

“But thanks to close monitoring and rapid intervention, the mare fully recovered,” she said.

The study, “Electrocardiographic confirmation of a twin pregnancy in a mare at 8 months of gestation,” was published in the Journal of Veterinary Cardiology. 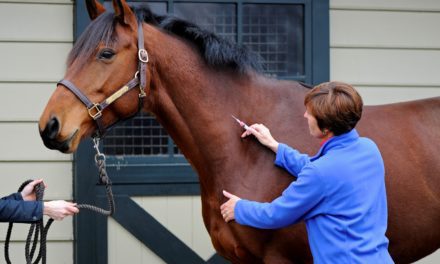